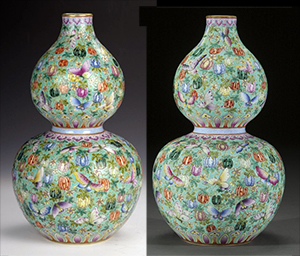 NORWOOD, Mass. (ACNI) – Real or unreal, a purported antique Chinese famille rose vase that hammered $1.7 million at Altair Auctions & Appraisers on March 30th is attracting far more attention than the seven-figure bid it garnered. Its origin and provenance may have been embellished, says the Boston Globe, whose reporters Sean P. Murphy and Andrea Estes wrote an extensive article on the piece in the daily newspaper’s May 12, 2013 edition.

Acting on a tip, Murphy and Estes looked into the background of the double-gourd Chinese vase described in Altair’s auction catalog as “18th century” with a “Qianlong six-character mark” and concluded it bears striking similarities to a possible repro vase that sold last year for a mere $3,840.

The vase said to be a modern iteration of an antique design was auctioned on May 23, 2012 in a Russian, Asian, European & American Fine Art sale conducted by Jackson’s International Auctioneers & Appraisers of Cedar Falls, Iowa. Jackson’s, a highly reputable, long-established specialist in fine art and antiques, had identified the vase in its catalog description as being Chinese famille rose porcelain with a “Qianlong archaic mark on the base.” The description made no mention of the vase being an antique, which was borne out by the modest auction estimate of $5,000-$7,000.

The main differences between the 6¾in modern copy sold at Jackson’s and the line-for-line twin auctioned recently by Altair had to do with representation. The vase in Altair’s sale was identified as having “Provenance From Christie’s Sale 2/23/1989. Lot 297.” A further reference noted: “See ‘Palace Museum Collection of ancient ceramics data Clippings (Volume II)’ page 180, Figure 204 Forbidden City Publishing House, 2005.”

The vase even bore a Christie’s sticker under its base suggesting it has been entered as Lot 297 in the aforementioned 1989 sale at the company’s South Kensington gallery in London. But there was one problem with that. Lot 297 in that particular sale was not even a vase; it was a blanc-de-chine statuette of Guanyin estimated to be worth around $100.

The vase sold by Jackson’s had on its base an aged partial sticker, also from Christie’s, with an illegible lot number on it. If, indeed, it was the same vase that appeared a year later in Altair’s auction, then logic would suggest that someone may have tampered with it subsequent to its sale at Jackson’s by adding a newer Christie’s sticker that had no connection to the vessel whatsoever.

Jackson’s president and CEO James Jackson spoke extensively with Auction Central News about the two vase transactions. Jackson stated that it “did not require an expert” to see that the vase in their May 2012 sale was not an antique. “You can put a Mercedes-Benz hood ornament on a VW Beetle, but that doesn’t make the car a Mercedes. Likewise, you can put a Christie’s sticker on a vase, but that doesn’t warrant that it’s an antique or that it even sold at Christie’s. We place no validity in auction house stickers unless research proves the sticker to be authentic and/or indigenous to the piece. This is the type of research we do on a regular basis and which often takes very little time and energy. Stickers have no bearing on value.”

“In this supercharged Asian art market, it’s not unusual for things with questionable stickers to come through any auction house’s doors,” Jackson continued. “You’ll notice that in our catalog description we made no mention of provenance from Christie’s, even though the vase had a Christie’s sticker. Our pre-sale estimate of $5,000-$7,000 told bidders our opinion of what the vase’s value was. I have four kids to put through college. If we had even sniffed the possibility that it might be a $1.7-million-dollar vase, we would have sought out an independent expert’s opinion. I’ve spent 25 years building up our company’s reputation. Does anyone really think we would have let it go for $3,840?” he asked rhetorically.

Jackson explained that the inclusion of “Qianlong archaic mark” in the auction-catalog description for the vase was in line with standard protocol used throughout the auction industry.

“It did have a Qianlong archaic mark on it, which any expert in Asian art will tell you is in no way a representation of a piece’s age. A ceramic made today in a village in China could have that mark on it. When the famille rose vase first came in to us, we thought it was probably a copy of an archaic prototype.” Jackson said.

“Not just in Chinese art, but in all Asian art, it’s not uncommon for contemporary makers to apply a mark to pay homage to their forefathers or to the artist who they apprenticed under,” Jackson explained. “For example, a Japanese woodblock print might be signed ‘Hiroshige,’ but does that mean it was created by Ando Hiroshige [born in the late 18th century] or one of a long line of artists whose work is ‘in the manner of’ and signed in the same way as original Hiroshiges were?”

Jackson said that he and his staff “look suspiciously” at everything that is brought in to them for potential consignment to auction. “Every item has to stand on its own merits. Its value can’t be assessed on the basis of an auction-house sticker or marking,” he said.

Altair Auctions & Appraisers is owned and operated by Benjamin Wang, who studied Asian art and antiques at the Institute of Mongolian History. He opened the doors to his auction business in September 2012.

Wang spoke at length with Auction Central News and confirmed that the $1.7 million sale of the vase has been canceled, not due to any sort of revelation that the vase was a copy, but because of nonpayment on the part of the winning bidder, who had participated by phone.

“After the auction we contacted the winning phone bidder in Italy, but he failed to pay for the vase or any of the other items he had won in the sale,” Wang said. “Instead, he asked to see the provenance for the vase. He asked if we had the consignor’s receipt from its prior sale, and my office sent it to him along with the invoice for all of the other pieces. We never heard from him again. Unfortunately that is not an uncommon occurrence in Asian art sales.”

Wang said the buyer had provided Altair with a copy of his passport as well as credit card details, which were used to charge a $3,000 deposit prior to bidding in the sale. Asked why he did not charge the same credit card after the sale for the amount shown as due on the invoice, Wang responded, “because the provenance – the receipt we had sent to him – turned out to be a fake.”

According to Wang, the vase was consigned to Altair’s sale by someone well known to him. “He’s a customer and a friend of mine. I trusted his judgment because he is a longtime collector of Chinese art,” Wang said. “My mistake was trusting him and not having the vase checked in depth. [The consignor] did not admit it to me openly, but the sticker turned out to be a fake. This has damaged my company.”

Wang denies any wrongdoing with respect to the now-aborted sale of the vase and says he still believes the piece to be a genuine Qianlong production. “The fact that the bidding went so high shows it’s real,” Wang told Auction Central News. “People weren’t bidding just because of the Christie’s sticker, which did not belong on the vase.”

However, in light of the controversy, the Department of Justice has taken an interest and is investigating parties involved in the Altair vase transaction to determine if any misrepresentation or fraud might have occurred.

In the Boston Globe article, Attorney Orestes Brown, who represents Benjamin Wang, said that his client plans to send the vase to China for independent authentication. “We don’t want the reputation of the vase to be tainted because of the opinion of some guy with no credibility,” Brown reportedly told the Globe in reference to James Jackson.

Jackson told Auction Central News he found Attorney Brown’s comment to be “extremely offensive,” adding, “If [Wang] is so sure the vase is of the Qianlong period, why doesn’t he stand up for his guns? With the sale canceled, presumably he has lost a very large commission. Why doesn’t he have a mutually agreeable expert here in the United States examine it?”

Wang told Auction Central News he “fully intend(s)” to have the vase authenticated, not in China but in the United States.

Auction Central News will continue to report on this story as it develops.

Copyright 2013 Auction Central News International. All rights reserved. This material may not be published, broadcast, rewritten, or redistributed. 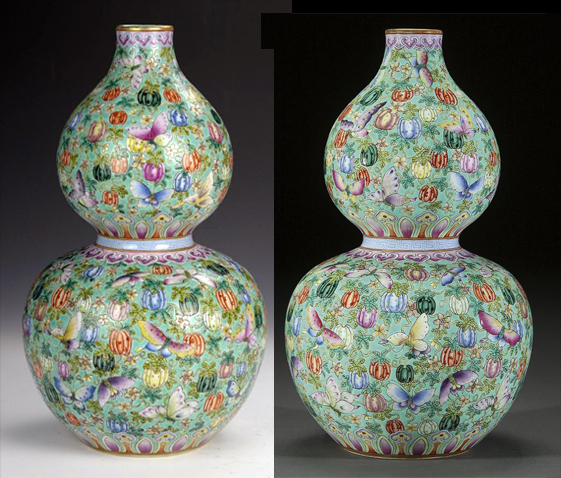