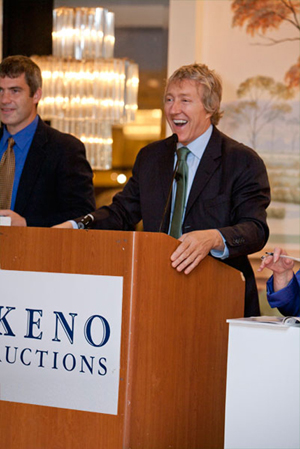 Leigh Keno is one of the most immediately recognizable figures in the antiques and fine art trade. He presides at the podium at all sales conducted by Keno Auctions. Image courtesy of Keno Auctions.

NEW YORK (ACNI) – Antiques were always an accepted part of life for Leigh Keno, the American fine and decorative arts expert who is president of Keno Auctions in New York City.

As a toddler, Leigh went everywhere with his antiques-dealing parents Norma and Ronald Keno – shows, flea markets, tag sales, garage sales – and by the time he was a pre-schooler, he, too, had the antiques “bug.”

Living on an idyllic 100-acre property in Mohawk, New York, Leigh spent much of his free time with his twin brother, Leslie, combing the area around the family home to see what “treasures” the earth might offer. “We even picked up dead bees to study and categorize for our insect collection,” Leigh recalled.

In time, the siblings would receive bicycles, which they used in their search for riverbed bottle dumps and dilapidated barns, from whose boards they would pull the old hinges and hardware that formed one of their first meaningful collections. But it was at shows that the enfants terribles of the antiques business learned their best lessons, by observing the experts and even testing the waters as fledgling dealers.

“By the time we were 11 or 12, we had our own blanket we would lay out at shows to sell our joint inventory of merchandise,” Leigh recalled. “That was our part of the booth. Sometimes we paid our parents part of the booth rent, and we kept records of every purchase and sale and always issued receipts.” In the diary of transactions kept by Leigh and his brother was written the prophetic notation “We are antique dealers.”

“I can remember us pulling on our L.L. Bean boots to comb the muddy turf at Brimfield after a rain,” Leigh said. “During the very early hours we’d walk around with our flashlights, shining them into vehicles to look for ‘sleepers.’ On plenty of occasions that’s just what we’d find – dealers trying to get some sleep. I remember one time seeing an arm raise up from inside a vehicle and someone saying, ‘Who the heck is that?’”

Not surprisingly, Leigh developed an early interest in folk art and Americana, since those were his parents’ specialties. His favorite category was stoneware, and while still a preteen, Leigh and his brother precociously amassed a collection of the distinctive pottery, including many rare examples. The boys’ collection remained in the Keno home until it was sold – with reluctance – to pay college expenses.

Leigh earned his stripes the proper way. He graduated with a B.A. in art history from Hamilton College and went on to become a graduate fellow at Historic Deerfield and visiting scholar at Wintherthur Museum.

In 1986, Leigh opened a gallery specializing in 18th to 20th-century American furniture and decorative arts, which he continued to operate until founding Keno Auctions in 2009.

Leigh is a popular speaker on the lecture circuit and appears regularly on the PBS Television’s Antiques Roadshow. In 2000, Leigh co-authored Hidden Treasures: Searching for Masterpieces of American Furniture, which recounts some of his most memorable furniture discoveries. Since 2001, Leigh has written monthly furniture and design columns for House Beautiful and This Old House magazines and is currently editor-at-large for Traditional Home magazine. Leigh was the co-host of Buried Treasure, a primetime television series on the Fox Network.

Even Washington has taken notice of Keno’s accomplishments. In 2005, President George W. Bush awarded Leigh the prestigious National Humanities Medal, a distinction bestowed upon individuals or groups whose work has “deepened the nation’s understanding of the humanities, broadened American citizens’ engagement with the humanities, or helped preserve and expand Americans’ access to important resources in the humanities.” That description from the National Endowment for the Humanities might very well have been written expressly with the founder and hands-on president of Keno Auctions in mind.

Keno describes his Manhattan-based operation as “a modern auction house that knows the importance of legacy,” adding, “We are dynamic and creative, and have assembled a brilliant network of specialists involved in paintings, furniture, decorative arts and jewelry. We love luxury and inspiration, and offer all of the excitement and thrill associated with the auction process.” And as of the New Year, that excitement will include Internet live bidding through LiveAuctioneers.com.

The gallery’s next high-profile event – and the first to have an association with LiveAuctioneers – is a Jan. 17 auction of Americana, paintings and decorative arts, with an afternoon session featuring the Peter Brams Collection of Important Woodlands Indian Art.

Among the many extraordinary early American pieces in the auction is the Drake Family carved and painted joined chest attributed to the Deacon John Moore Shop (1614-1677, Windsor, Conn.) tradition. A quintessential New England production, it may sell in the vicinity of $80,000-$120,000.

To view the fully illustrated catalogs for both sessions of the Jan. 17 sale at Keno Auctions and to sign up to bid absentee or live via the Internet, log on to www.LiveAuctioneers.com. 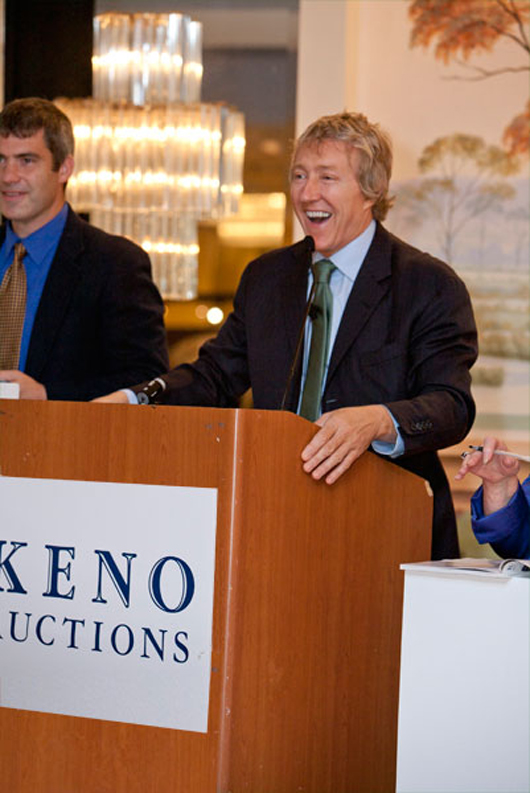 Leigh Keno is one of the most immediately recognizable figures in the antiques and fine art trade. He presides at the podium at all sales conducted by Keno Auctions. Image courtesy of Keno Auctions. 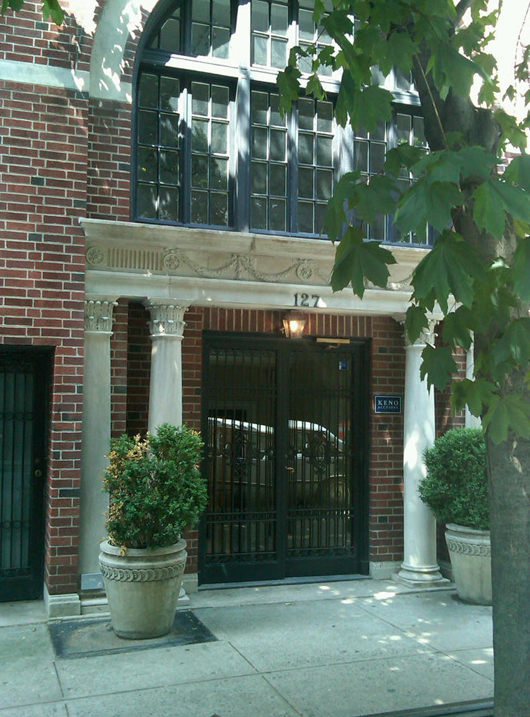 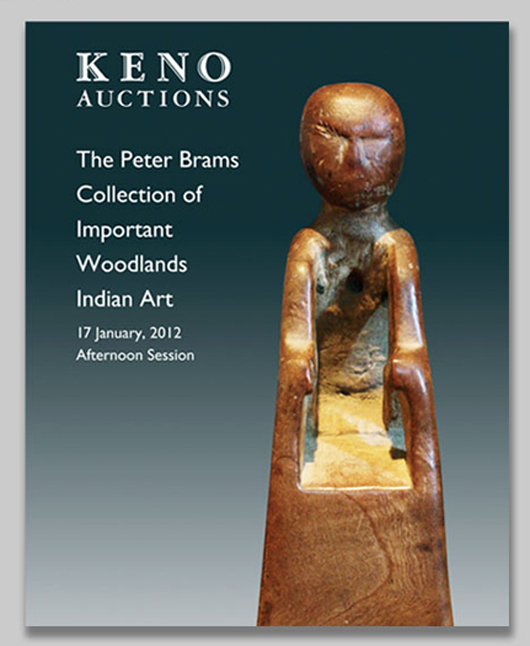 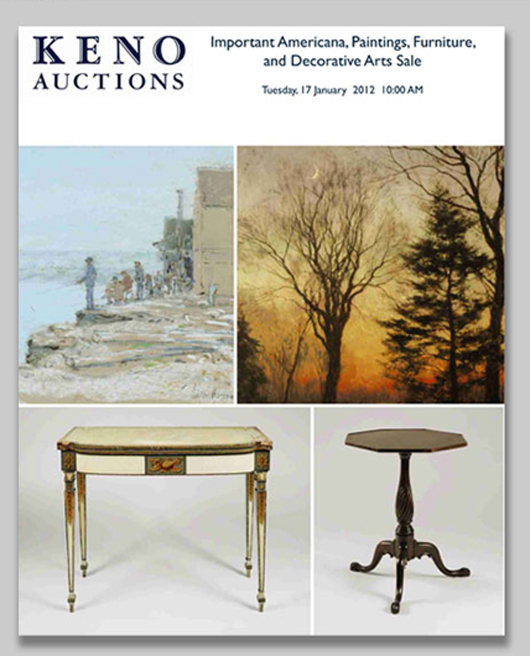 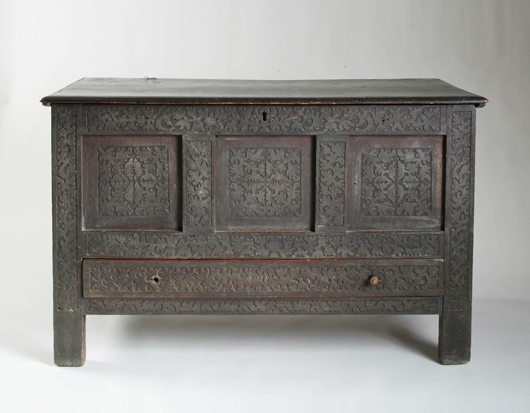 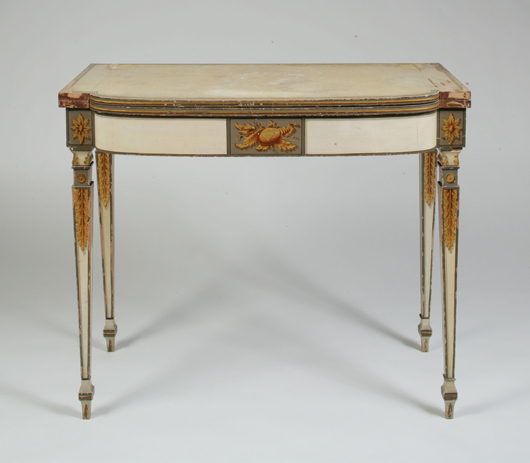 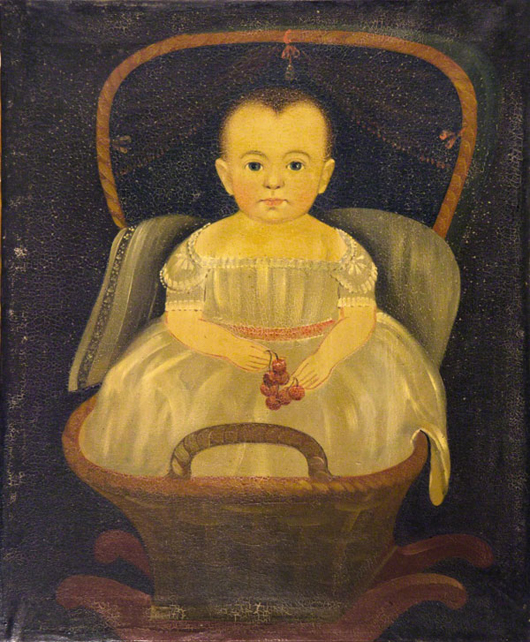 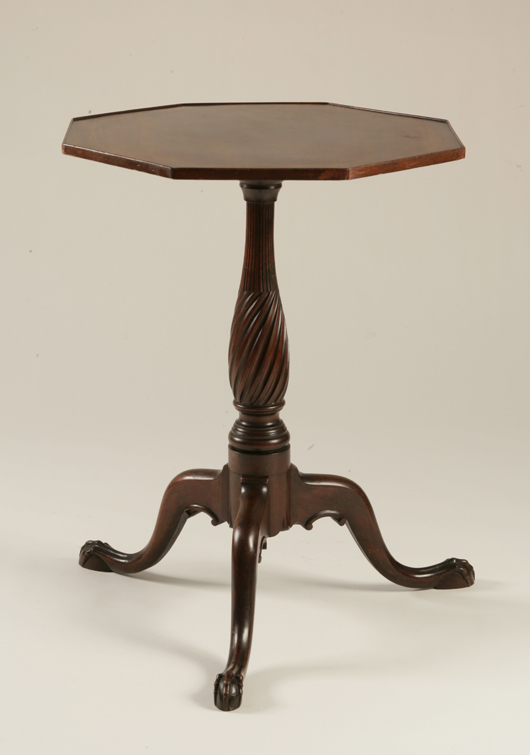 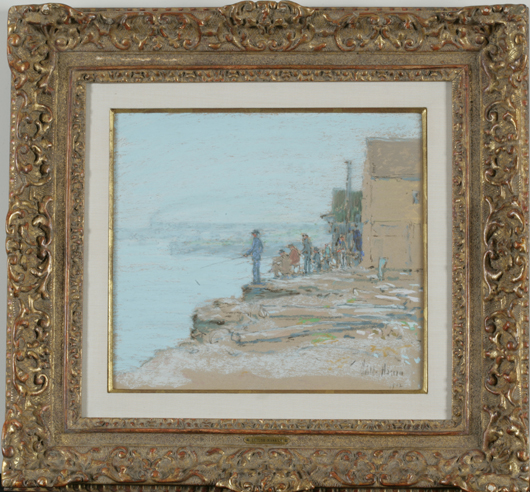 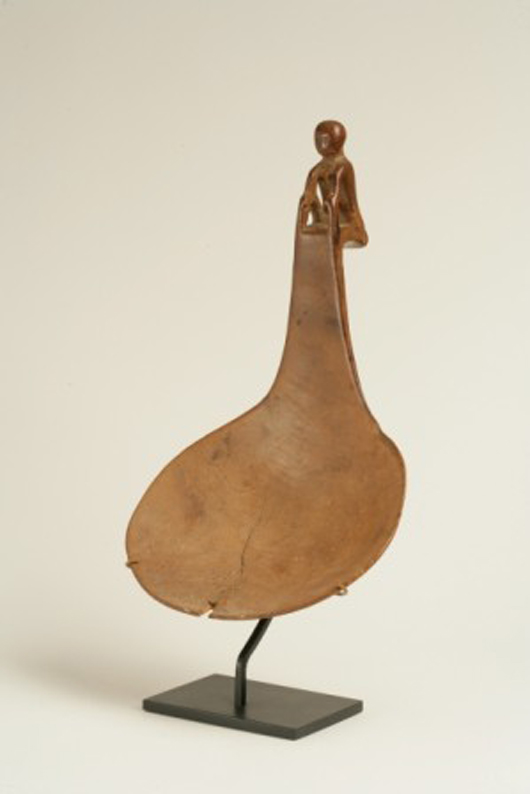