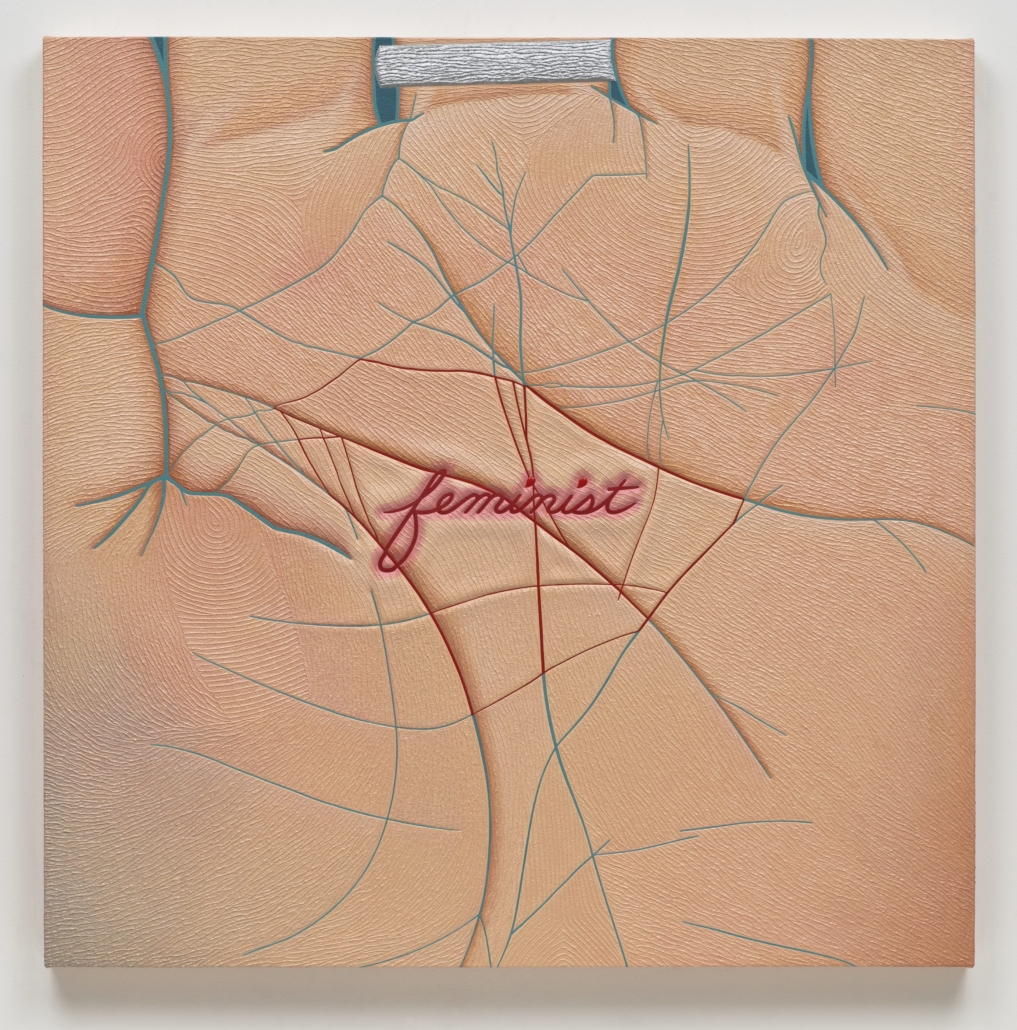 Linda Stark, ‘Stigmata,’ 2011; oil on canvas over panel; 36 × 36 × 3 in.; University of California, Berkeley Art Museum and Pacific Film Archive; purchase made possible through a gift of the Paul L. Wattis Foundation.

BERKELEY, Calif. — The UC Berkeley Art Museum and Pacific Film Archive is hosting the most extensive exhibition to date of feminist art practices in the 21st century. A sweeping survey of feminist art from the last two decades, New Time: Art and Feminisms in the 21st Century features 140 artworks by 76 artists and collectives working across a range of media. It is currently open and will continue through January 30, 2022.

New Time is part of the Feminist Art Coalition, a nationwide consortium of more than one hundred arts organizations convened by BAMPFA, which is presenting a yearlong series of programming in 2021 informed by feminist thought and practice. 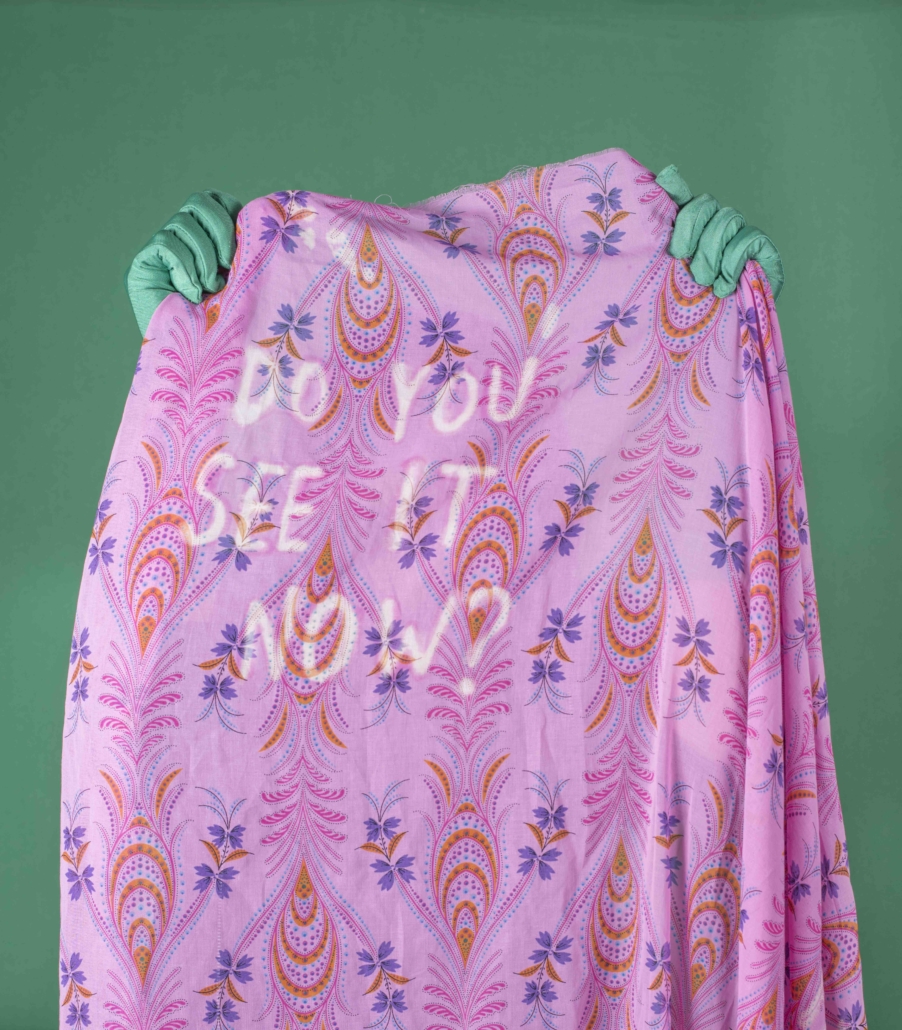 One of the largest exhibitions BAMPFA has mounted in its recent history, New Time occupies nearly half of the museum’s 25,000 square feet of gallery space and will also include a program of film and video screenings and a newly commissioned site-specific work in BAMPFA’s lobby. The exhibition will feature dozens of works from public and private collections, as well as BAMPFA’s own holdings, organized thematically to highlight a wide range of practices in contemporary art informed by feminist themes. New Time is curated by Apsara DiQuinzio, BAMPFA’s senior curator of modern and contemporary art and Phyllis C. Wattis MATRIX Curator, who also spearheaded the creation of the Feminist Art Coalition. 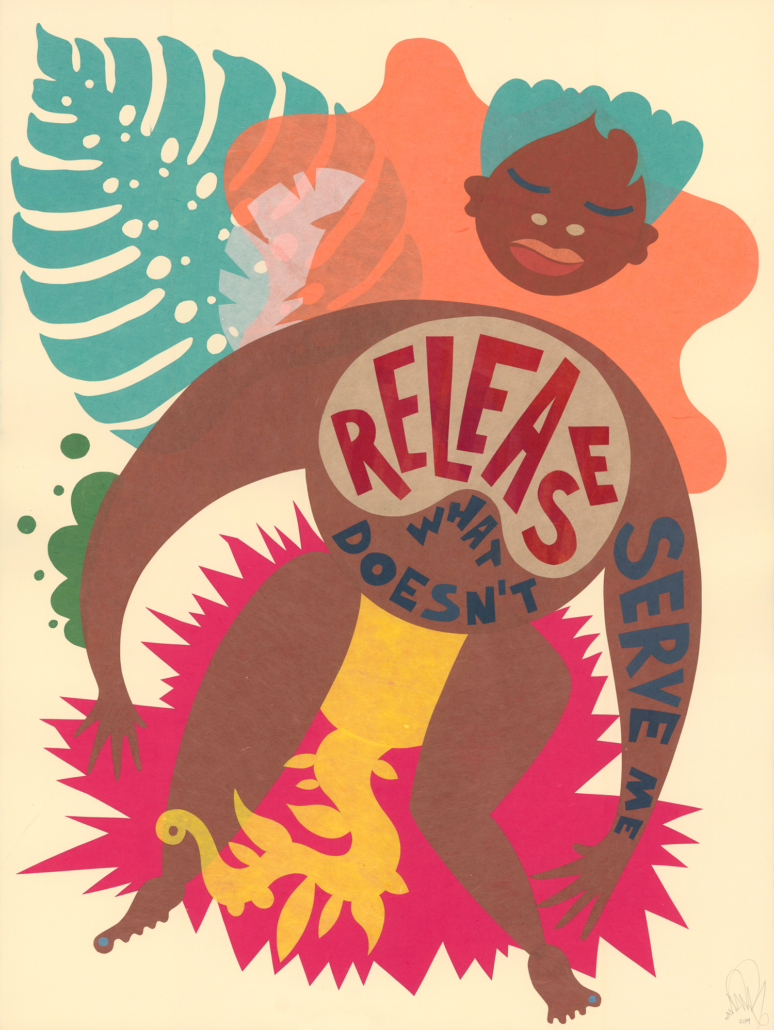 In conjunction with the exhibition, BAMPFA is publishing a fully illustrated 240-page catalog, edited by DiQuinzio, that features new scholarship and interviews on feminist art topics. The catalog includes an introductory essay by DiQuinzio that explores the multiplicity of feminist themes and concepts in the exhibition; critical essays by Lyn Hejinian, and Jamieson Webster and Chiara Bottici; a conversation between Judith Butler and Mel Y. Chen on the evolution of their thought on gender theory; a conversation between Julia Bryan-Wilson and Natalia Brizuela on recent international feminist art practices; a conversation between renowned Black scholar Hortense Spillers and notable younger Black feminists she has influenced; and individual essays focused on each of the artists and collectives featured in the exhibition. 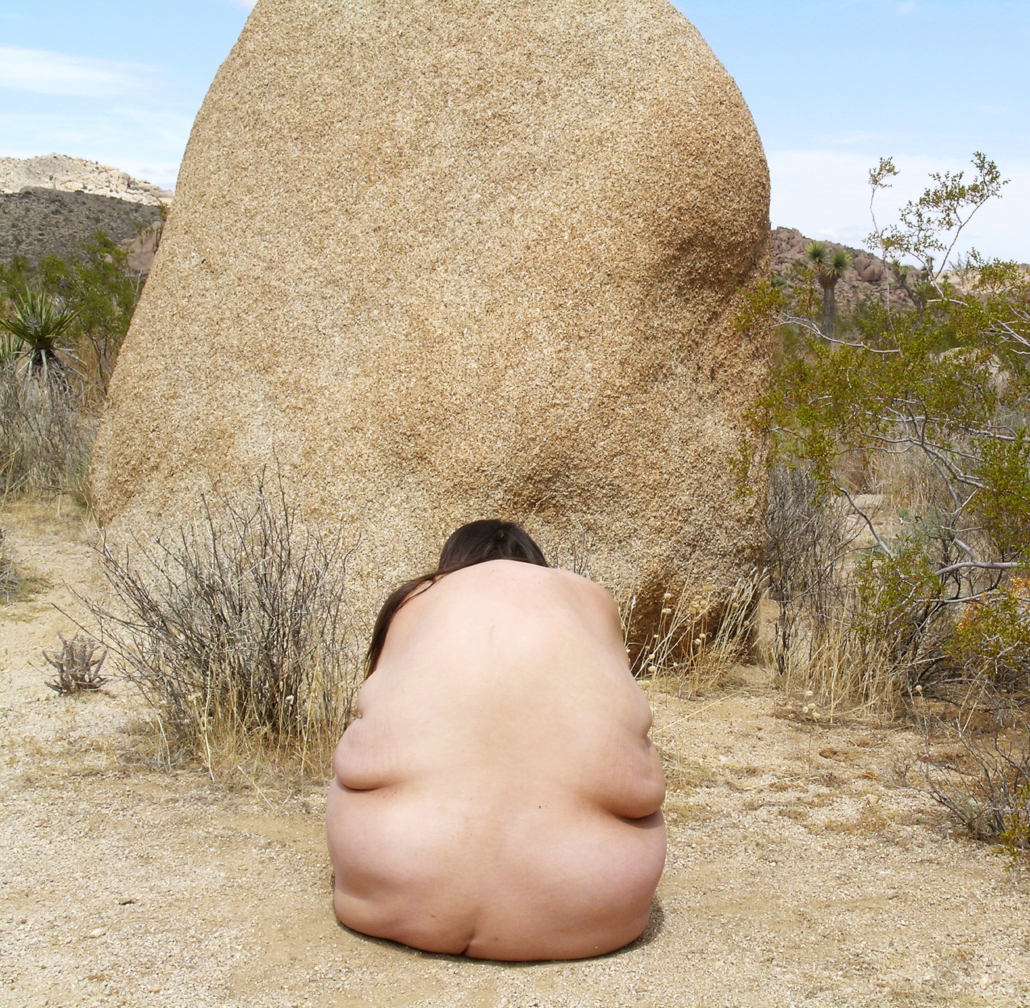 Prelude: Arch of Hysteria explores the negative cultural stereotype that women have had to overcome in the pursuit of social justice.

Returning the Gaze features works that acknowledge and interrogate the complexities — and implicit power dynamics — of gendered spectatorship.

Time as Fabric considers how artists reinterpret historical themes through a feminist lens in order to call into question previous treatments of a subject.

The Body in Pieces demonstrates how many artists today are working with fragmented representations of the female body.

Gender Alchemy examines the shifting categories of gender and how artists explore the representation of bodies that resist fixed binary gender delineations.

Womxn Workers of the World Unite! focuses on the intertwined themes of activism, domesticity, and labor.

Too Nice for Too Long looks at artistic meditations on the power of female anger.

The Future Is Feminist presents visions of feminist utopias in literature and art that have yet to be realized.

Complementing these gallery sections, New Time will also feature a large-scale mural by Luchita Hurtado on BAMPFA’s Art Wall, a 30-by-63-foot space dedicated to site-specific commissions. Hurtado created the design for the abstract mural shortly before passing away last year at the age of ninety-nine, and it is being installed at BAMPFA this summer in accordance with her specifications. 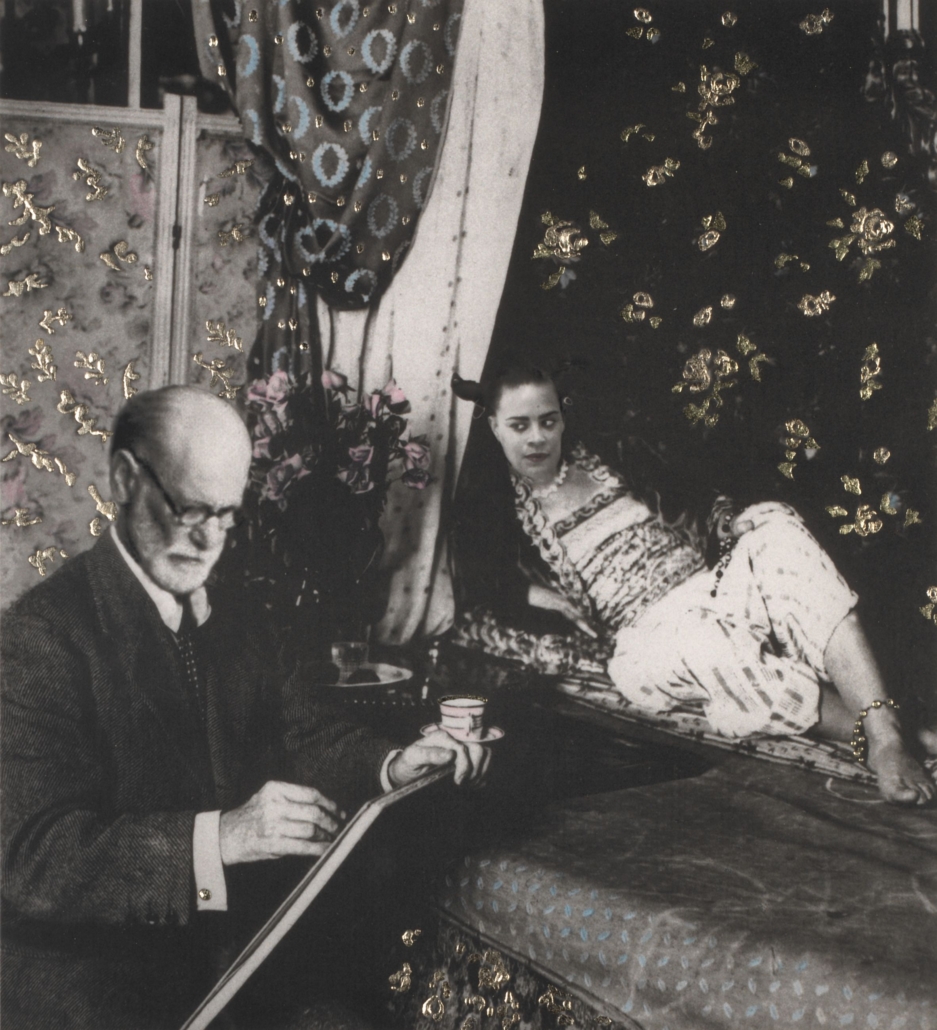 BAMPFA will also mount a series of public and educational programs in conjunction with New Time, including performances, lectures, workshops, and more. On Saturday, December 18, BAMPFA will host a marathon seven-hour performance by the acclaimed pianist Sarah Cahill, who will perform more than 70 works by underrecognized female composers from the Baroque era to the present day; the performance will take place in the Crane Forum at the center of the museum, where visitors will be invited to sit and circulate at their leisure. BAMPFA will also host a series of public conversations focusing on gender, Black feminism, and recent feminist art practices, featuring leading scholars in the field including Natalia Brizuela, Julia Bryan-Wilson, Judith Butler, Mel Y. Chin, Jacqueline Francis, Kenyatta Hinkle, and Courtney Desiree Morris. Additional public programs will include artist talks, poetry events, and artmaking workshops; a full slate of programming, including specific dates, will be announced later this summer and will be listed at bampfa.org. 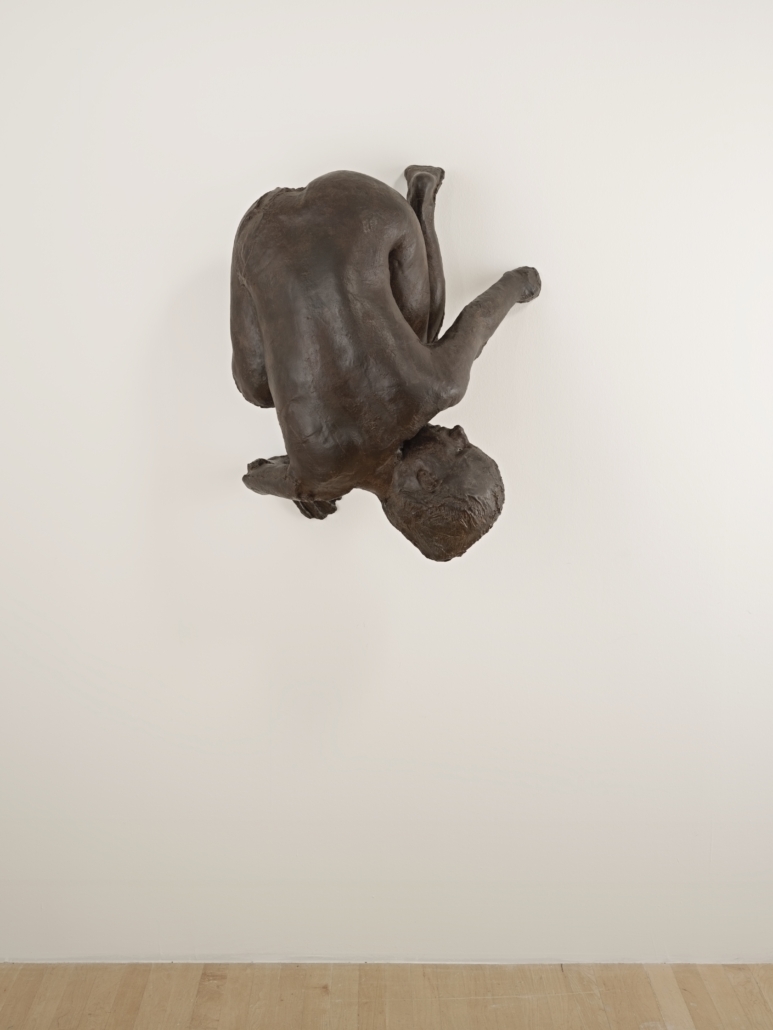 Titled after a feminist poem by the Berkeley-based poet Leslie Scalapino, New Time is one of the exhibitions developed under the auspices of the Feminist Art Coalition, which was conceived by DiQuinzio in response to the 2016 presidential election. Supported by a grant from The Andy Warhol Foundation for the Visual Arts, the coalition began as a 12-member working group and has since grown to include more than 100 arts organizations across the country, which have partnered to present a nationwide series of exhibitions, performances, lectures, symposia, and new commissions on feminist themes. Following the scheduling disruptions of the COVID-19 pandemic across the nation’s art institutions, what was originally intended as a three-month initiative coinciding with the 2020 presidential election has been expanded to a full year of programming that extends through 2021. More information about the Feminist Art Coalition, including a current list of participating institutions, can be found at feministartcoalition.org.

Visit the website for the UC Berkeley Art Museum and Pacific Film Archive and see its dedicated page for New Time: Art and Feminisms in the 21st Century.