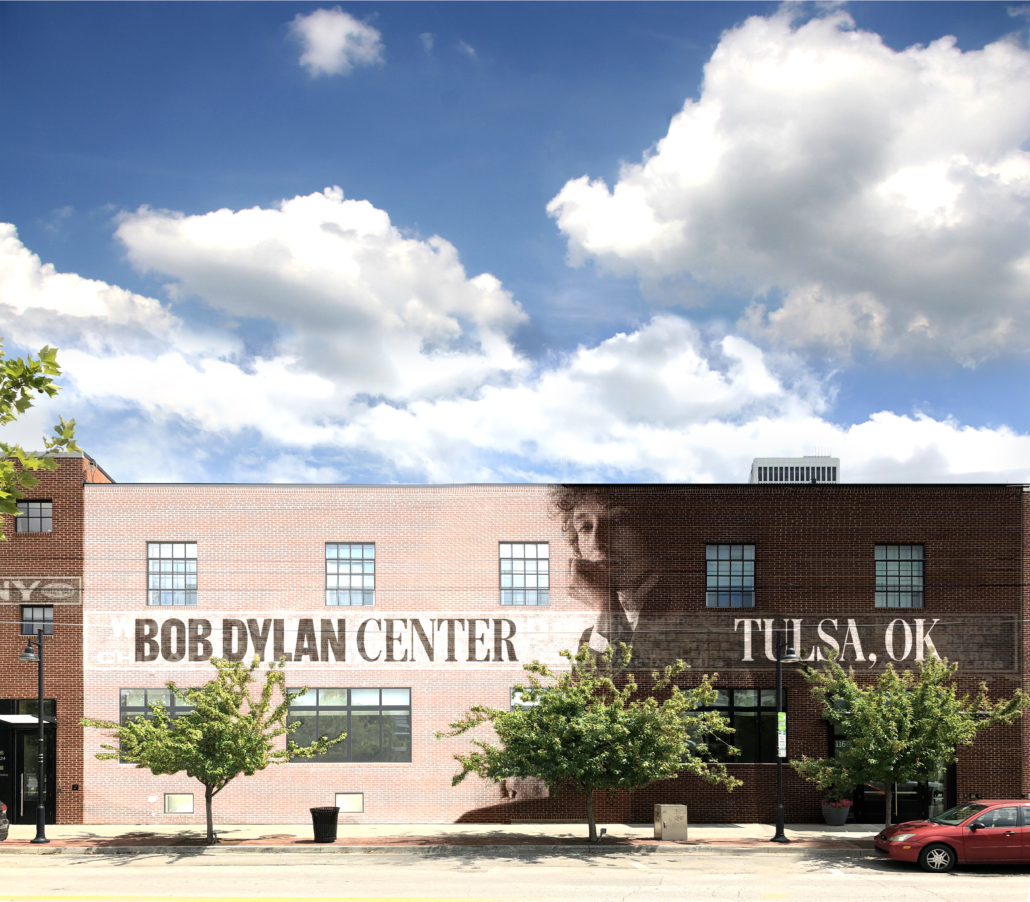 Exterior rendering of The Bob Dylan Center, which will open in Tulsa, Okla., in May 2022.

TULSA, Okla. – The Bob Dylan Center (BDC) will open on May 10, 2022, welcoming visitors from around the world to access and interact with more than 100,000 exclusive cultural treasures found in The Bob Dylan Archive. These will include handwritten lyric manuscripts to some of the world’s most treasured songs, previously unreleased recordings, never-before-seen film performances, rare and unseen photographs, visual art, and other priceless items spanning Bob Dylan’s unparalleled seven decades as one of the world’s most important cultural figures.

Located in Tulsa’s burgeoning arts district just steps from the city’s renowned Woody Guthrie Center, The Bob Dylan Center is being designed by renowned architectural and exhibit design firm Olson Kundig, led by design principal Alan Maskin. The BDC will feature cutting-edge and immersive technology in a multimedia environment that is designed to be as impressive and revealing to visitors new to Dylan’s work as it will be to longtime fans and aficionados. 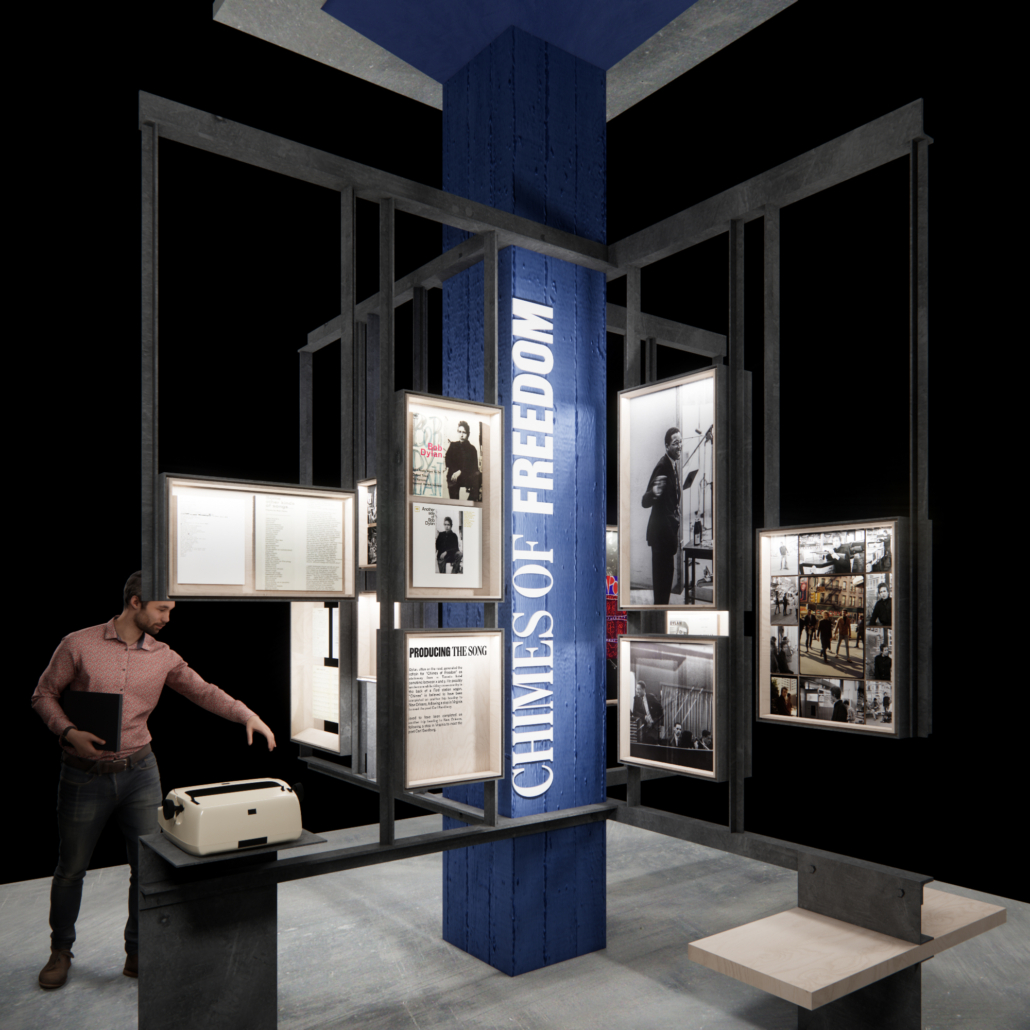 Displays at the Bob Dylan Center will include The Six Songs Exhibit, which will explore select Dylan classics in depth.

Among the many highlights to be found at The Bob Dylan Center are an ever-evolving curated display of elements that illuminate the depth and breadth of the Bob Dylan Archive collection; an immersive film experience that will initiate visitors through an innovative cascade of archival music and film, directed by renowned Dylan chronicler Jennifer Lebeau; a recreation of an authentic studio environment where visitors will experience what it was like to be present at one of Dylan’s historic recording sessions; The Columbia Records Gallery, which will provide an in-depth look at the creation, performance and production of timeless Dylan songs such as Like a Rolling Stone, Tangled Up in Blue, and Chimes of Freedom; a screening room that will showcase Dylan-related scripted films, documentaries, and concert performances, including never-before-seen material unearthed from the archive; a multimedia timeline of Dylan’s life from his early years in Minnesota through the present day, written by award-winning historian Sean Wilentz; and the Parker Brothers Gallery, which will explore the creative process through the work of other innovative artists, in an initial exhibit curated by influential author Lewis Hyde.

One sterling example of the treasures to be found in The Bob Dylan Archive is a recording of Dylan performing Don’t Think Twice, It’s All Right in the autumn of 1962. This heretofore-unknown recording was made by Milton (Mell) and Lillian Bailey, friends and early champions of the young Bob Dylan when he was a fixture in New York’s Greenwich Village folk scene. This version of the song, recorded in the Baileys’ apartment at 185 East 3rd St., features alternate lyrics and is the earliest known recording of the song that was eventually released in 1963 on The Freewheelin’ Bob Dylan. The song can be downloaded at https://bit.ly/3ycz9X1 courtesy of The Bob Dylan Center. 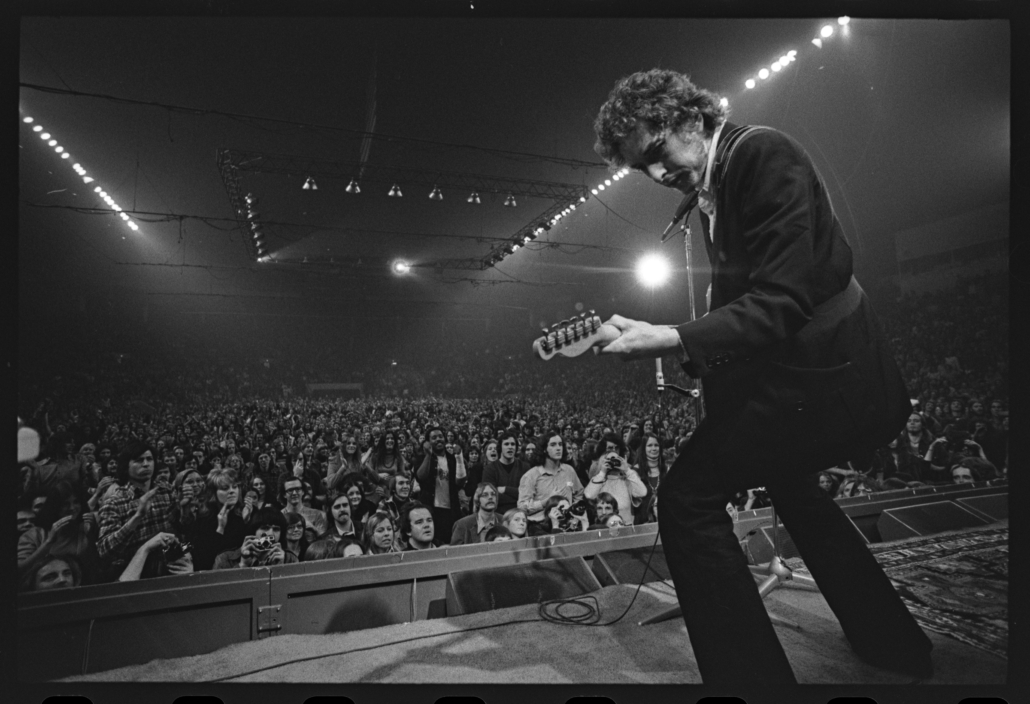 Bob Dylan performing on stage during his 1974 tour with The Band.

Another fine example is a recently unearthed image of Bob Dylan on stage during his 1974 tour with The Band, taken by renowned photographer Barry Feinstein. That photo can be downloaded at https://bit.ly/3ycz9X1, also courtesy of The Bob Dylan Center.

59 Productions, world-leading specialists in design for stage and live events, including the Opening Ceremony of the London 2012 Olympic Games, the record-breaking David Bowie Is exhibition, and the decor concept design for The Met Ball, is collaborating with Olson Kundig on the exhibition design and media development.

“In revealing the existence of The Bob Dylan Archive to the public in 2016, Ben Sisario wrote in The New York Times, “It is clear that the archives are deeper and more vast than even most Dylan experts could imagine, promising untold insight into the songwriter’s work.”

The three-story facade of The Bob Dylan Center will face downtown Tulsa’s hugely popular public gathering space, Guthrie Green, and will depict a 1965 image of Dylan donated to the center by renowned photographer Jerry Schatzberg.

Founding Memberships in The Bob Dylan Center, which include lifetime memberships to the both the BDC and the Woody Guthrie Center as well as permanent recognition on the Center’s donor wall, are available now at bobdylancenter.com. Annual memberships to The Bob Dylan Center will become available later this year, including combined membership opportunities for both the BDC and its neighbor, The Woody Guthrie Center.

Both The Bob Dylan Center and Woody Guthrie Center operate under auspices of the American Song Archives, a project of the George Kaiser Family Foundation (GKFF). GKFF acquired Dylan’s vast archives in 2016 and Guthrie’s in 2010.

Information regarding public admission to The Bob Dylan Center will be released later this year.