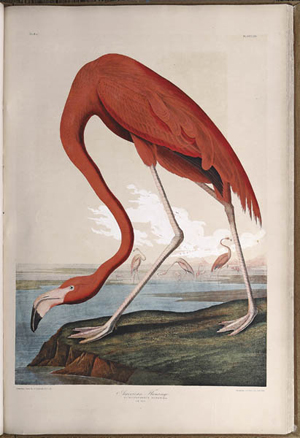 John James Audubon recorded seeing a flock of flamingos for the first time along the coast of southeast Florida on May 7, 1832. He pictured a male flamingo in his book ‘The Birds of America.’ The chromolithograph print based on Audubon’s original drawings was also included in the 1860 Bien Edition of ‘The Birds of America.’ Neal Auction Co., New Orleans, recently sold a nearly complete Bien Edition for $271,999. Image courtesy Neal Auction Co.

ANN ARBOR, Mich. (AP) – Of the 8 million tomes in the University of Michigan library system, one is exalted above all: The Birds of America, from Original Drawings, by John James Audubon.

Other books might be older, more rare or more expensive, but none hold the distinction as the first ever purchased for the university’s library.

The school’s Board of Regents approved the book’s purchase for $970 on Feb. 5, 1838. That was before the university held its first class or constructed its first building.

Less than 125 sets of the “double elephant folio” remain intact, out of the 190 originally printed. Christie’s auction house sold a copy in March 2000 for $8.8 million.

Michigan’s copy of the oversized volume was serving as the cornerstone of the “Treasures of the University Library” exhibit at the Harlan Hatcher Graduate Library’s Audubon Room.

The exhibit, which ended recently, was intended as a gateway for scholars and the curious to appreciate the resources available throughout the 30-plus libraries in the university’s network.