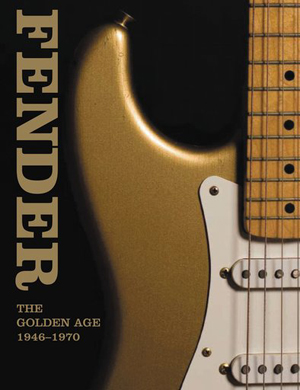 The Stratocaster. The Telecaster. During the quarter-century following World War II, Fender guitars didn’t just make music. They made musical history. Those spectacular years are remembered and celebrated in Fender: The Golden Age 1946-1970, a definitive new book by Martin Kelly, Terry Foster and Paul Kelly, which tells the story of the Fender company and the wondrous instruments it created.

The culmination of the passion and obsession of three authors who live on both sides of the Atlantic, almost 10 years in development, this book is a celebration of Fender’s “golden age,” 1946-1970.

A unique look at some of the finest musical instruments ever produced, Fender: The Golden Age will be irresistible to anyone interested in guitars, rock ’n’ roll, or mid-century American collectibles and ephemera. Like the guitars it documents, the book simply brings down the house.

About the Book’s Collaborators:

Martin Kelly is a joint managing director of the highly acclaimed British independent record label, Heavenly Recordings.  His love affair with Fender instruments began in 1977 when he has only 12 with the purchase of his first Fender guitar, a secondhand 1968 Mustang Bass.

Canadian-born Terry Foster is the world’s leading authority and collector of Fender ephemera from the golden age. Terry has written for Vintage Guitar Magazine, and is widely regarded as the expert on pre-CBS Fender student guitars.

Paul Kelly is a documentary filmmaker and designer. He is responsible for the photography and design work within these pages. Paul also discovered Fender guitars during the punk-rock era and soon developed a keen interest in early Fender Jazzmasters.