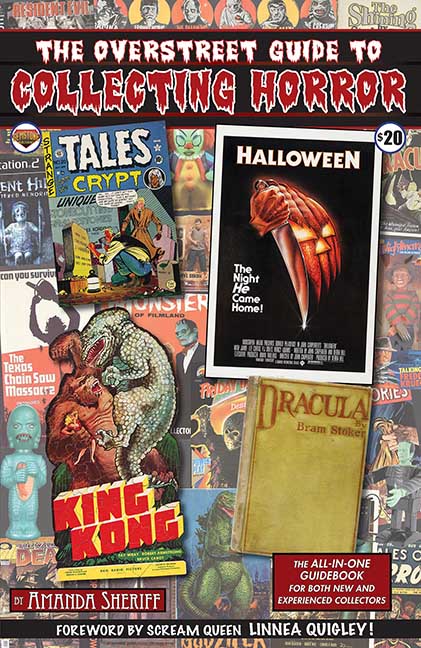 The Overstreet Guide to Collecting Horror, on sale Oct. 4, 2017

BALTIMORE – Devoted to all things within the scary entertainment genre, The Overstreet Guide To Collecting Horror is set to debut in comic shops and bookstores. This new volume is filled with content on movies, literature, comic books, video games, soundtracks, TV shows, and magazines. There are features on EC Comics, Universal Monsters, Friday the 13th, Hammer Horror, The Walking Dead, Japanese horror, Stephen King, sci-fi/horror, and more.

The 232-page, softcover, full-color volume includes profiles on classic and contemporary horror properties and insightful interviews with horror collectors. There are also Q & A’s with scream queen Linnea Quigley and veteran genre actor Sid Haig. The book kicks off with a foreword by Quigley.

The Overstreet Guide To Collecting Horror carries a cover price of $20. It is scheduled to hit comic book shops on Wednesday, October 4, 2017. It will arrive at traditional booksellers about two weeks later. Retailers served by Diamond Comic Distributors may order or re-order using item code AUG171734. Others may contact Gemstone at (443) 318-8455.

While not a price guide, it does showcase prices for key items, including record prices paid and historic ranges of sales. Like all of Gemstone Publishing’s Overstreet “How To” books, it’s designed for seasoned enthusiasts and newcomers alike. Experienced collectors will find new perspectives and insights, while new collectors are offered years’ worth of knowledge in one volume.

“I’ve been a fan of the genre my whole life. I love the movies, the books, TV shows, comics, artwork – you name it. I get excited about so many different facets of horror, so it was a natural fit. “Plus, I’ve been asked ‘Why do you like horror?’ – as have most horror fans – many times. This book is a chance to answer that question and share the love with fellow fans,” Sheriff said.

“That’s what I love about our “How To” books. I can talk about horror media for hours, but I learned more about the lives of industry pros, the thriving collectability of out of print VHS tapes, that there’s an Alfred Hitchcock Mont Blanc pen that sells for over $1,000, and that General Mills Monster Cereal box flats are worth $600 apiece,” she said.

“This book features many types of collectibles in the horror genre. It has action figures, statues, comics, toys, premiums, movie posters, screen-used items, autographs, games, and all the little oddities. I think that keeps the book fresh because it’ll appeal, not just to bigtime horror fans, but also to video game collectors, literature buffs, comic collectors, toy lovers, and others,” Sheriff said.