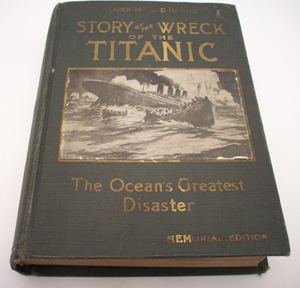 ‘Story of The Wreck of The Titanic, World’s Greatest Sea Disaster,’ published in 1912, is an actual account of the sinking that year. It should not be confused with Morgan Robertson’s fictional work published 14 years earlier. Image courtesy The Gap Auction.

KALAMAZOO, Mich. (AP) – It’s a familiar story: The largest ship ever built, billed as “unsinkable” by its British owners and the press, strikes an iceberg one April and goes down. Due to a lack of lifeboats, more than half the passengers perish in the North Atlantic.

Except The Titan is a fictional ship, and author Morgan Robertson first published his novella, Futility, in 1898—14 years before the sinking of the RMS Titanic on April 14, 1912.

The similarities between Robertson’s plot and real life have given Futility an uncanny reputation among cognoscenti, with references popping up in everything from Walter Lord’s 1955 nonfiction account of the Titanic sinking, A Night to Remember, to Alan Moore’s graphic novel A League of Extraordinary Gentleman. The Doctor Who audio play The Wreck of the Titan is partly based on Robertson’s novella.

“If you have any interest in the Titanic, it’s a must-have,” said Mark Dimunation, chief of the rare books and special collections department at the Library of Congress in Washington, D.C. “It’s a great collectible book and there’s this odd aspect to it makes it completely interesting.”

But while you’ll see a fictional copy in the video game “Titanic: Adventure Out of Time,” very few copies of the 1898 edition still exist. (After the sinking of the Titanic, Robertson re-released Futility in 1912 with a new subtitle, The Wreck of the Titan.)

The Library of Congress has a copy, as does the British Library and a few other private libraries. And so does Vaughn Baber, owner of Bicentennial Books, Kalamazoo’s oldest used bookstore.

Baber, 83, said he found his copy 25 years ago in a used bookstore in St. Petersburg, Fla. Aware of its rarity, he snapped up the copy, which had a sticker price of $3.

“He didn’t know what he had,” Baber said of the owner of The Lighthouse bookstore. Baber and his wife, Arlene, have decided that the centennial of the Titanic’s sinking in April makes it the right time to sell Futility. While they have not yet settled on a venue, Baber believes an auction will generate the most interest.

“I challenge you to find another copy,” Baber said inside his 35-year-old store on Westnedge Ave., with books filling the floor-to-ceiling shelves and spilling onto the floor.

There are no other copies currently for sale in the United States, according to both Dimunation and Joyce Kosofsky, a rare books expert at the Brattle Book Shop in Boston, one of the oldest antiquarian bookshops in the U.S. Kosofsky said that the last available copy of Futility sold at auction in October 2010 for $2,200.

“That’s a hammer price,” said Kosofsky, which she says is more useful in determining value than an appraisal.

It’s not clear whether that copy’s condition was similar to Baber’s, which is in very good shape for a 114-year-old book, with an inside water stain as the only visible blemish. The machine-press cover shows a picture of an ocean liner sinking beneath the waves with an iceberg behind it.

It’s not first Shakespeare folio money, and one page of an original 1456 Gutenberg Bible would fetch more than 10 times more. But “that’s a good price for a book,” said Kosofsky.

Baber doesn’t think so. “I won’t sell this for less than $10,000,” he said. “Particularly now with the centennial and the sinking of the Costa Concordia.”

While Dimunation did not set a dollar amount on Baber’s copy, he thinks Baber should expect a “bump” because of the anniversary.

“Now in the year of the centennial, anything Titanic is extraordinarily collectible,” he said. “The text itself is of great interest to people, to have the first printing … makes it a highly desirable to a certain audience. It’s a lovely piece in that regard.”

When asked if Futility is the rarest edition he’s ever owned, Baber said, “in 35 years, there have been many old books.”

Another memorable title was Experiments and Observations on Gastric Juice and the Physiology of Digestion, written in 1833 by William Beaumont, a 19th-century U.S. Army surgeon who served on Mackinac Island and is known as the father of gastric physiology.

Arlene Baber actually found that copy, while waiting for Vaughn in a bookstore.

“I was kind of bored waiting, so I said `Here’s an old book’ and pulled it off the shelf,” she remembered.

That copy was purchased for Western Michigan University’s library, where it was presented as the 1 millionth volume, the Babers said.

Robertson wrote his novella with a pen, not a Ouija board, and there are differences between his narrative and the actual sinking. Most notably, 705 passengers are reported to have survived the wreck of the Titanic; only 13 survived Robertson’s Titan. The Titanic was on its way to New York when it sank; the Titan was headed the opposite direction on it way to Europe. The Titan strikes the ice head on; the Titanic, which tried to turn to avoid the iceberg, took a glancing blow that tore open its side. The Titanic took about three hours to sink; the Titan disappeared under the waves in five minutes.

But the similarities are striking.

“I challenge anyone not to raise an eyebrow,” said Dimunation. “It’s all within inches of being completely identical.”

In fact, the events are so similar that Lord prefaced A Night to Remember, with a comparison of the real and fictional events.

“In 1898, a struggling author named Morgan Robertson concocted a novel about a fabulous Atlantic liner, far larger than any that had ever been built. Robertson loaded his ship with the rich and complacent and then wrecked it one cold April night on an iceberg,” Lord wrote. “Fourteen years later, a British shipping company named the White Star Line built a steamer remarkably like the one in Robertson’s novel. … The real ship was 882.5 feet long; the fictional one was 800 feet. Both vessels were triple screw and could make 24-25 knots. Both could carry about 3,000 people, and both had enough lifeboats for only a fraction of this number. But, then, this didn’t seem to matter because both were labeled, ‘unsinkable.’”

Baber won’t be the only collector celebrating the Titanic centennial with an auction. In April, some 5,500 artifacts from the shipwreck go up for bidding at Guernsey’s, a New York auction house, the Associated Press reported in December. The artifacts, which are the largest Titanic collection in existence and include china, a diamond necklace, ship’s instruments and a portion of the hull, appraised for $189 million.

Prospective bidders hoping to pick up a ticket or a teacup are out of luck: The artifacts are to be sold together as a winner-take-all auction and the winning bidder must abide by court-ordered covenants regarding the historical trove. According to a 2010 court ruling, the collection must be made available “for public display and exhibition, scientific and scholarly research and educational purposes.” 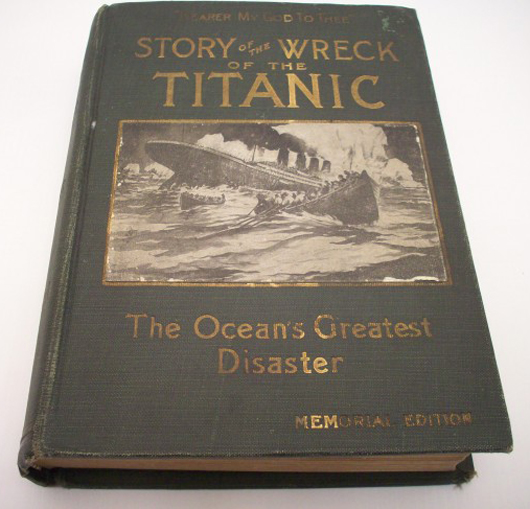 ‘Story of The Wreck of The Titanic, World’s Greatest Sea Disaster,’ published in 1912, is an actual account of the sinking that year. It should not be confused with Morgan Robertson’s fictional work published 14 years earlier. Image courtesy The Gap Auction.

Fate of Titanic, its treasures in U.S. judge’s hands

University of Iowa to have Pollock masterpiece restored