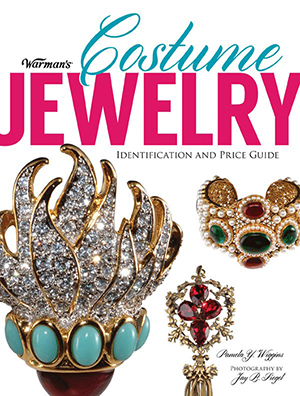 The cover of the new Warman’s Costume Jewelry Identification and Price Guide by Pamela Y. Wiggins

ROUND ROCK, Texas – If you’ve never thought of old costume jewelry as a wearable art form with an intriguing past, a new book by author Pamela Y. Wiggins may prove to be an enlightening read. In Warman’s Costume Jewelry, recently released by Krause Publications, Wiggins shares her expert insight and acknowledges that while these pieces were once considered to be “junk jewelry” as widely advertised in the 1930s, made to be worn as a fashion statement for a season or two and then cast aside, that’s no longer true.

“This book is designed to serve a number of audiences with an interest in vintage and collectible jewelry, whether they’re just trying to find out if the goodies in Grandma’s jewelry box should go to a high-end auction house or be donated to the local thrift store. It serves as a tool for dating many pieces as well, whether the owner is contemplating selling them or just wants the satisfaction of knowing a little something about the objects she holds dear,” Wiggins wrote in her introduction.

Warman’s Costume Jewelry exhibits the broad knowledge base Wiggins has amassed buying, selling, and writing about costume jewelry since she first started collecting in the late 1980s thus establishing her as one of the most highly regarded jewelry experts in the country. The book covers jewelry ranging from true antique Victorian-era pieces to those designed by clever contemporary artisans already considered collectible, and includes insights gleaned visiting with and interviewing industry notables such as Kenneth Jay Lane, Pat Ciner Hill, and Lawrence Vrba. Her vast interaction with other jewelry experts and collectors through the organization she co-founded, Costume Jewelry Collectors Int’l (CJCI), is also woven into the text.

“I first learned to love fashion accessories working in upscale stores like Sakowitz and Saks Fifth Avenue. When I discovered a few vintage pieces by the legendary company Miriam Haskell at an estate sale in the late 1980s, I didn’t know anything about them although I did recognize their quality. I began researching 20th century jewelry at that point along with the rich history attached to each item, selling those first pieces and buying more, and never looked back. I feel my passion for collectible jewelry in all its varied forms and my appreciation for its past encapsulates nicely in my latest book,” Wiggins adds.

Photography professional Jay B. Siegel contributed more than 800 images to illustrate the book, which includes a detailed section entirely devoted to identifying and dating pieces using stones, clasps and other components along with identifying unmarked vintage jewelry. Other chapters provide historical context decade by decade demonstrating how popular culture and historical events influenced adornment from the late 19th century through the early 2000s. Major designers and manufacturers are also discussed including notable haute couturiers such as Chanel and Dior, and a section on the fabulous retail lines marketed by Joseff of Hollywood beginning in the 1930s exhibits how the glamour of the company’s movie jewelry was embraced by the masses. Value ranges are included with every piece featured throughout the book.

In addition to collecting, Wiggins also markets vintage and contemporary ladies accessories through her business Chic Antiques by Pamela Wiggins. Constantly researching and evaluating the thousands of pieces she offers to her customers provides hands-on learning she passes on to her readers both in Warman’s Costume Jewelry and her writing for About.com where she serves as the site’s antiques expert.

“I’m so fortunate to be able to incorporate a fascinating hobby into my profession and to share beautiful jewelry with others in a number of ways. Nothing gives me more joy than seeing people take pleasure in their adornment as much as I do, and helping them learn about their treasures through my new book is a longtime goal I’m so excited to have realized,” Wiggins adds.

Warman’s Costume Jewelry is available at www.chicantiques.com . It is also offered through Amazon.com and other online booksellers, as well as Barnes & Noble stores throughout the United States. 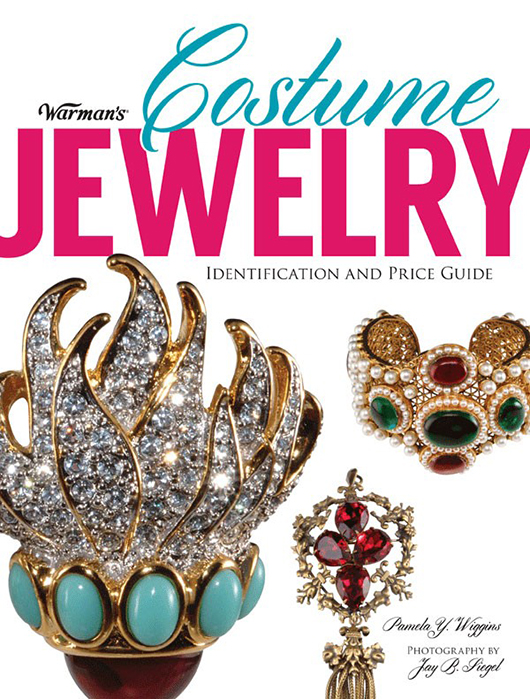 The cover of the new Warman’s Costume Jewelry Identification and Price Guide by Pamela Y. Wiggins