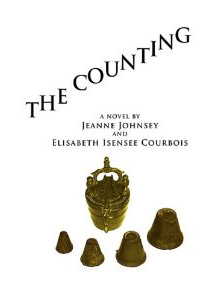 The Counting, by Jeanne Johnsey and Elisabeth Isensee Courbois.

Familiar places mentioned in the narrative include Hudson’s Salvage Center, the University of Southern Mississippi and Forrest General Hospital, while other businesses’ identities have been subtly changed, but will still be recognizable.

“When people ask me what ‘The Counting,’ is about, I usually tell them, in a nutshell, it is about love, betrayal, revenge, and the antique business,” said Johnsey, who has a doll shop inside Calico Mall Antiques Center in downtown Hattiesburg.

While much of the story takes place at the fictional Compton House antiques store, and all the local name-dropping adds even more reality to the tale, it is all just a figment of their vivid imaginations.

“Elisabeth and I were both familiar with the antiques business, and that’s why we chose to have our characters involved in that business,” Johnsey said.

Johnsey and Courbois met when they were both in graduate school at USM and soon discovered that they had a unique ability to write together.

“With all the activities, it was hard for each of us to find time for ourselves, to do our own writing. But if we were working together, and we each knew the other expected us to have five pages, or 10, by our next work session, we’d somehow be able to get it done, not to let the other down.”

It has taken a while to fine-tune the process, but the old friends have learned how to write fiction together. They started The Counting over a cup of coffee.

“We discussed the characters and plot,” Johnsey said. “Each one of us picked a scene to write before the next meeting. Maybe one particular character or action would especially intrigue each of us and we’d work on that one. Before the meeting, we’d e-mail pages to each other, and have suggestions ready for the next meeting. When we met again, we would read the text aloud over and over as we made changes.

“When we finally had a section to our liking, it was a great moment, worthy of celebration with Pepperidge Farm Geneva cookies. A lot of coffee and those Geneva cookies went into this book. Besides the little changes, we totally revised the book several times, wrote about twice as many pages as there were in the final book. We made lots of cuts to the final version to keep the pacing going.”

In The Counting, Ashley McLaurin leaves prison after serving eight years for a crime she did not commit. She is emotionally deadened after being disowned by her family and forced to give up custody of a child born to her in prison. All that remains is her desire for revenge.

When Ashley returns to Hattiesburg after her release, she notices that the town has really grown. That’s something Courbois, a native of the Netherlands, has also noticed since moving here in 1980.

“I first came to the U.S. because of my husband’s job,” Courbois said.

Johnsey and Courbois published The Counting, through X-Libris, a print-on-demand company.

“The publishing business has gone through a lot of changes in the last decade, and getting a book to market in the traditional route is a slow process,” Johnsey said. “We became aware that a lot of new writers now are starting out by self-publishing. It gets your work out there where it can be read by people, and that is ultimately what you want, whether it is a dozen, or a thousand or more people.

“We enjoyed being able to design our own cover, take the pictures, and have it done just the way we envisioned it.”

‘Dying art’ of stained glass provides a living for one artist