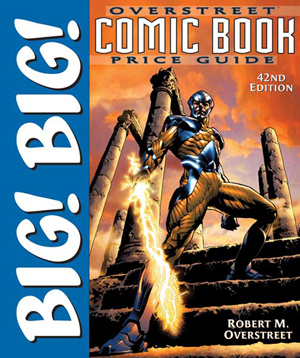 TIMONIUM, Md. – In response to requests from retailers and serious collectors, Gemstone Publishing will again publish an oversize, spiral-bound, limited-edition version of the Overstreet Comic Book Price Guide. This will mark the first time in four years this edition has been available. Overstreet Comic Book Price Guide #42 will feature Valiant Entertainment’s pre-eminent hero, X-O Manowar, on an all-new cover by artist Lewis LaRosa.

The hefty spiral-bound reference features only pricing and related data from The Overstreet Comic Book Price Guide; no ads feature articles or other material. Prized by dealers and experienced collectors, this version of the industry “Bible” has been noted for its usefulness in daily work situations.

The Overstreet Comic Book Price Guide has been the definitive guide for collectors and dealers alike since 1970 and features historic annotation, as well. It is scheduled to go on sale in late August 2012 with a cover price of $45.

“Bringing a project ‘back by popular demand’ is a marketing cliché, but when true, it’s one that publishers are happy to embrace. We have consistently received requests to revive The Big, Big Overstreet Comic Book Price Guide over the last four years. Most recently at the Diamond Comic Distributors Retailer Summit prior to C2E2, in literally every group of retailers we heard from, numerous dealers asked when we were going publish it again. As it turns out, the answer is now,” said Steve Geppi, president of Gemstone Publishing.

Reintroduced with a sold-out first issue by New York Times bestselling author Robert Venditti and Eisner Award-winning artist Cary Nord this May, Valiant Entertainment’s X-O Manowar is at the forefront of the iconic comic publisher’s summer 2012 relaunch. A critical and commercial smash upon its May 2 debut, X-O Manowar #1 and the larger “Summer of Valiant” initiative has garnered the reborn Valiant extensive industry coverage and fan support. The sold-out success of X-O Manowar #1 will be followed by a second printing of the series’ 40-page first issue and another all-new take on a Valiant legend with Harbinger #1, which was released just this week. Bloodshot will follow in July and Archer & Armstrong will begin publication in August.

“After all the great press and fan reaction Valiant Entertainment has generated for their revival, it seemed like a natural fit to feature one of their most popular characters on the cover of Overstreet Comic Book Price Guide #42 for its comeback,” Geppi said.

“Partnering with Gemstone for this new edition of the guide is a confirmation that Valiant is back in a big, big way,” added Valiant Publisher Fred Pierce. “Valiant couldn’t be happier to help add the distinguishing touch to the return of a product as beloved by fans and retailers as Overstreet Price Guide.”

The standard editions of the Overstreet Comic Book Price Guide #42 will be offered in both hardcover and softcover versions, featuring The Avengers by Joe Jusko and Catwoman by Adam Hughes, beginning Wednesday, July 11, 2012 at comic shops nationwide and then at bookstores. A fundraiser hardcover edition limited to 500 copies featuring Batman and Grendel by Matt Wagner with colorist Ryan Brown will go on sale at Comic-Con International: San Diego as well. Offered exclusively by The Hero Initiative, it will also go on sale through a small number of Hero’s affiliates on Wednesday, July 11. 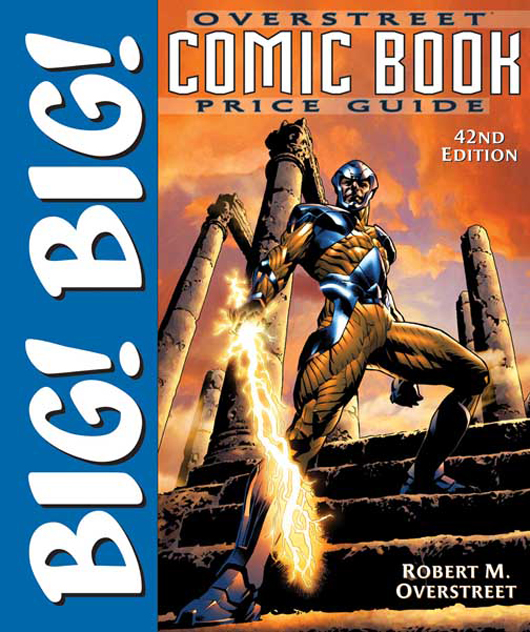