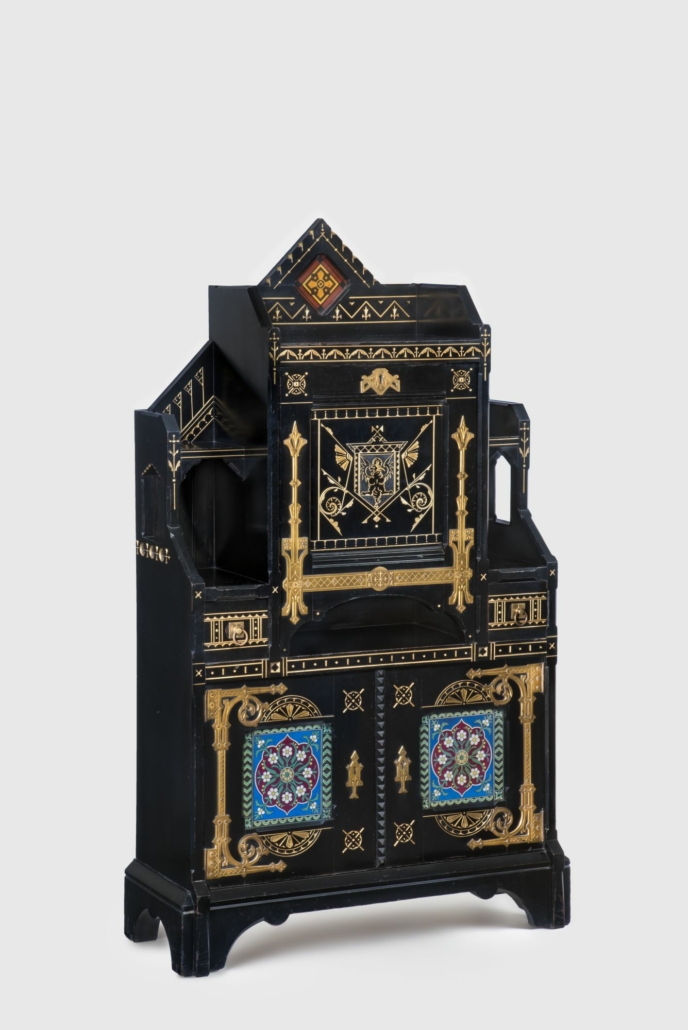 BROOKLYN, N.Y. – Modern Gothic: The Inventive Furniture of Kimbel and Cabus, 1863-82 opened at the Brooklyn Museum of Art on July 2 and continues through February 13, 2022.

During the course of their remarkable nearly 20 year partnership, immigrant cabinetmakers Anton Kimbel (1822–1895) and Joseph Cabus (1824–1898) transformed their business into a leading New York City furniture and decorating firm, and defined a new take on Modern Gothic design for the post–Civil War United States. 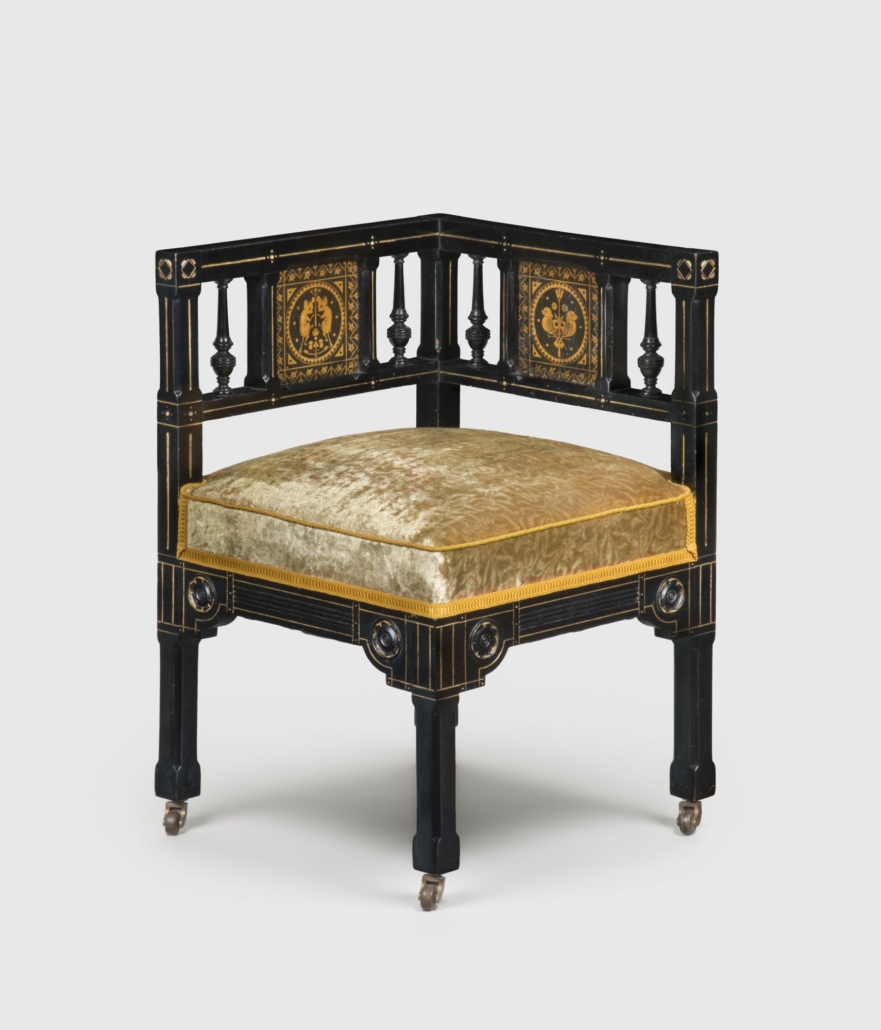 Modern Gothic: The Inventive Furniture of Kimbel and Cabus, 1863–82 is the first museum exhibition to trace their timeless American success story, presenting new scholarship and fresh insight into the history of the enterprising design team. More than 60 objects are on view, including 40 pieces of furniture as well as digitized period photographs, books, a painting, and ephemera that illustrate Kimbel and Cabus’s inventive design in a variety of contexts. 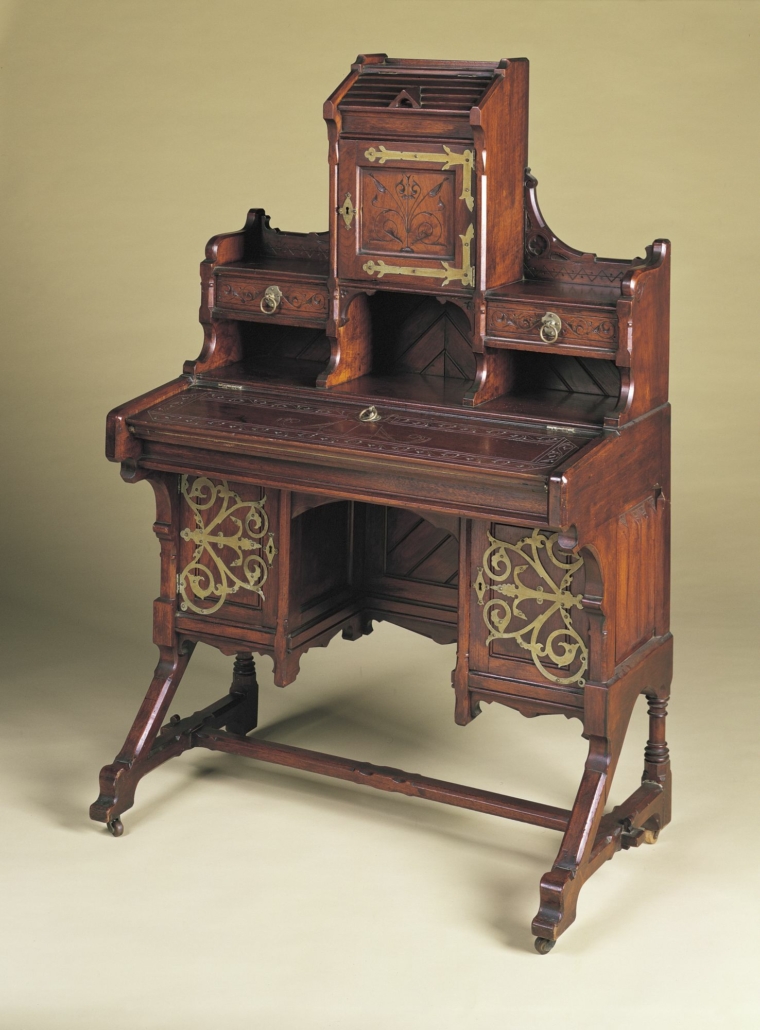 The exhibition is curated by guest curator Barbara Veith in consultation with Medill H. Harvey, Ruth Bigelow Wriston Associate Curator of American Decorative Arts and Manager of the Henry R. Luce Center, The Metropolitan Museum of Art, and Shea Spiller, Curatorial Assistant, Arts of the Americas and Europe, Brooklyn Museum. 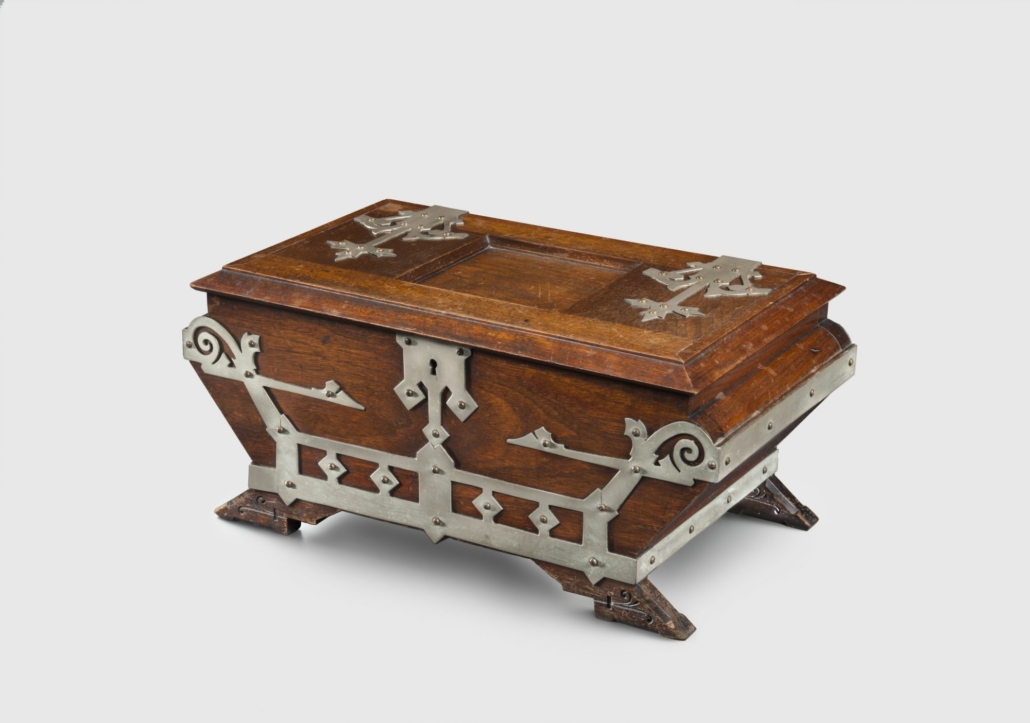 “The Brooklyn Museum retains the largest institutional holdings of furniture made by Kimbel and Cabus thanks to (the late) Dr. Barry R. Harwood and his keen eye for innovative 19th-century furniture,” says Barbara Veith. “We honor his legacy with this long-planned exhibition. Thanks to the enthusiastic support of institutional and private lenders, we have assembled many of the finest examples of Kimbel and Cabus’s work, and present new research drawn from primary resources that enriches our understanding of the firm’s contributions to the history of design in the United States.” 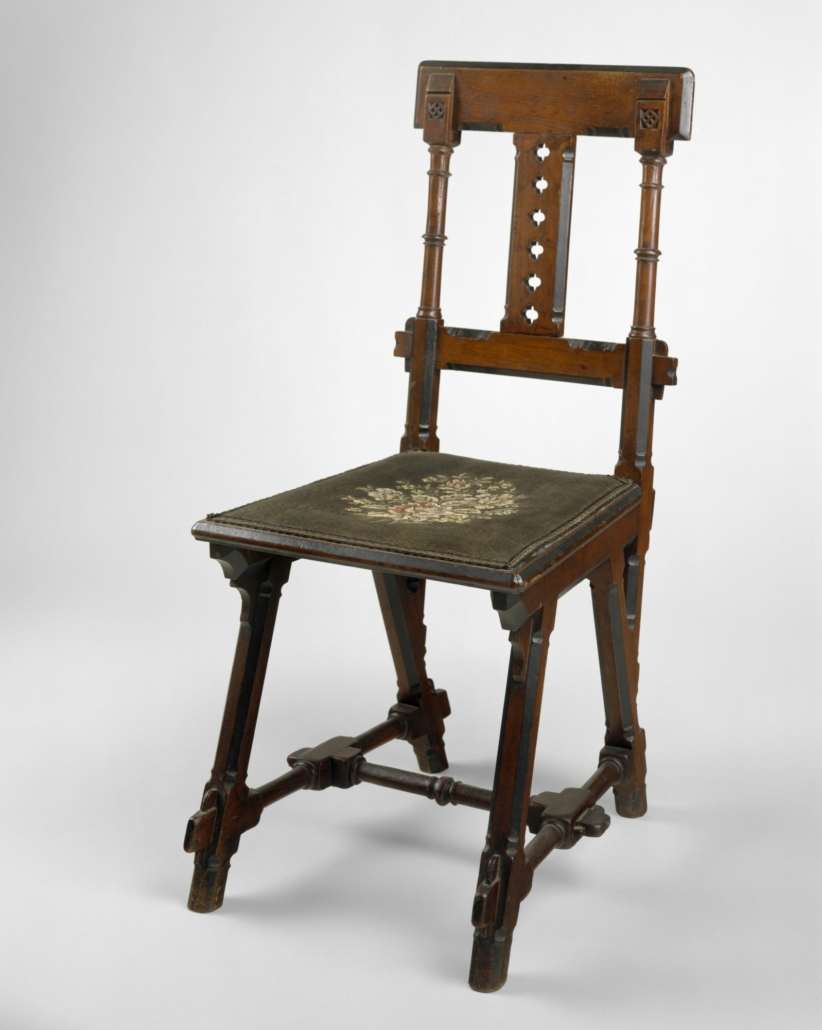 Kimbel and Cabus were early advocates of Modern Gothic’s design-reform ideals. The word “Gothic” evokes numerous associations, especially the architecture of Western European cathedrals built in the 12th through 16th century, which included pointed arches, flying buttresses, and brilliantly colored stained glass. The late 18th and early 19th centuries saw a revival of interest in the Gothic in Britain, and fanciful aspects of Gothic architecture were initially incorporated into building, interior, and furniture designs. 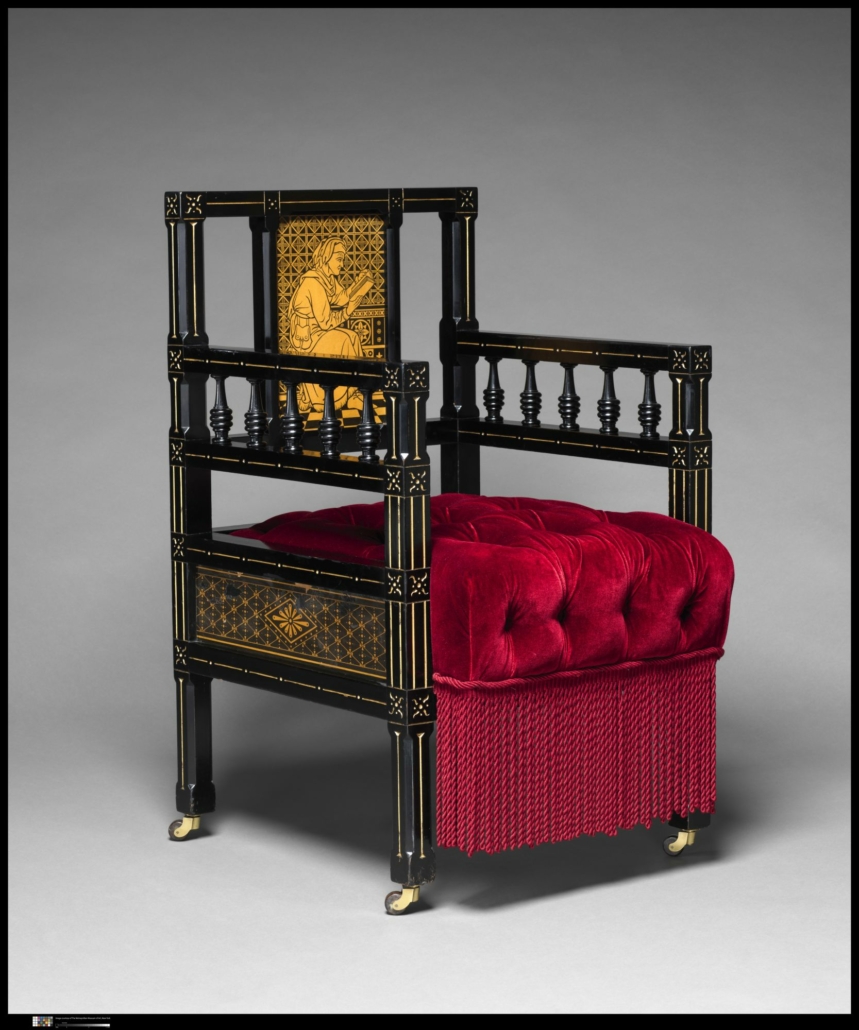 Modern Gothic—as a later iteration of what came to be known as the Gothic Revival style—emerged in the 1830s in Europe and was promoted during the 1860s by a generation of progressive architects and designers who rejected industrialization and advocated a return to handcraft. These design reforms gained popularity in the United States during the post–Civil War period, as a growing middle class gained time and resources for artistic and leisure pursuits. Like many families today striving to craft identity through material goods and home decoration, those with progressive taste looked to new and exciting styles and embraced the Modern Gothic aesthetic. 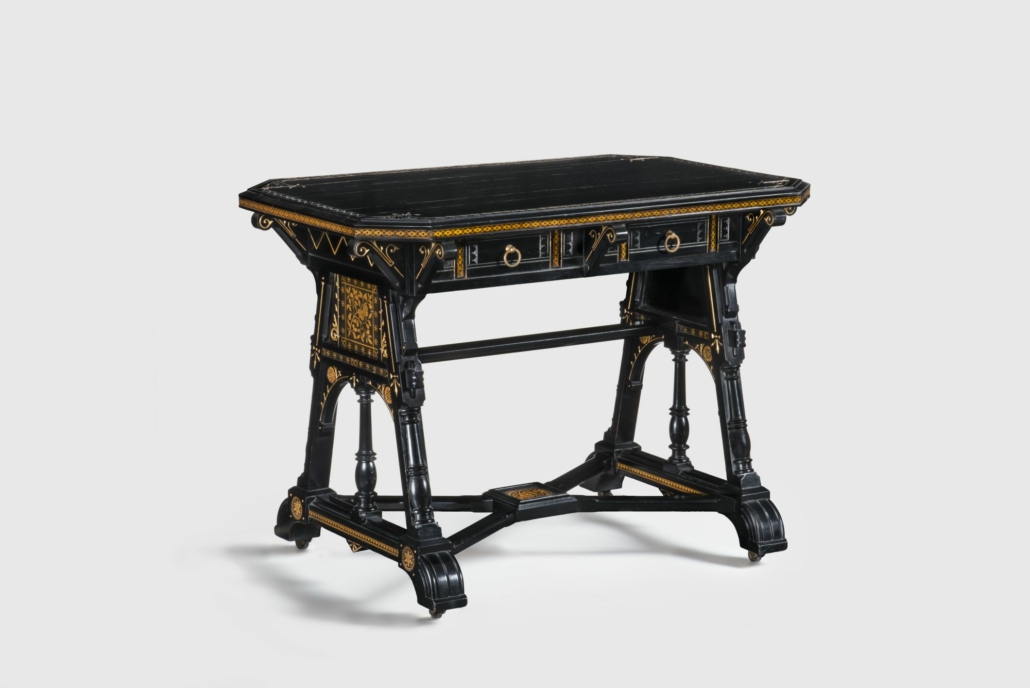 In 1870s New York City, Kimbel and Cabus synthesized British and continental European design sources to produce a wealth of Modern Gothic furniture forms that combined bold, clean lines with rich surface decoration. Unlike some of their competitors who catered to the societal elite, Kimbel and Cabus designed their wares at different price points in order to appeal to a broad range of customers. Drawing on primary sources such as censuses, credit reports, city directories, newspapers, and photographs, the exhibition presents illuminating new research tracing Kimbel and Cabus’s business history, marketing practices, furniture forms, clientele, and commissions. The insights gleaned from these sources have informed the Brooklyn Museum’s efforts in mounting the exhibition, such as the re-creation of a period-appropriate textile, with which conservators reupholstered the Museum’s corner chair. 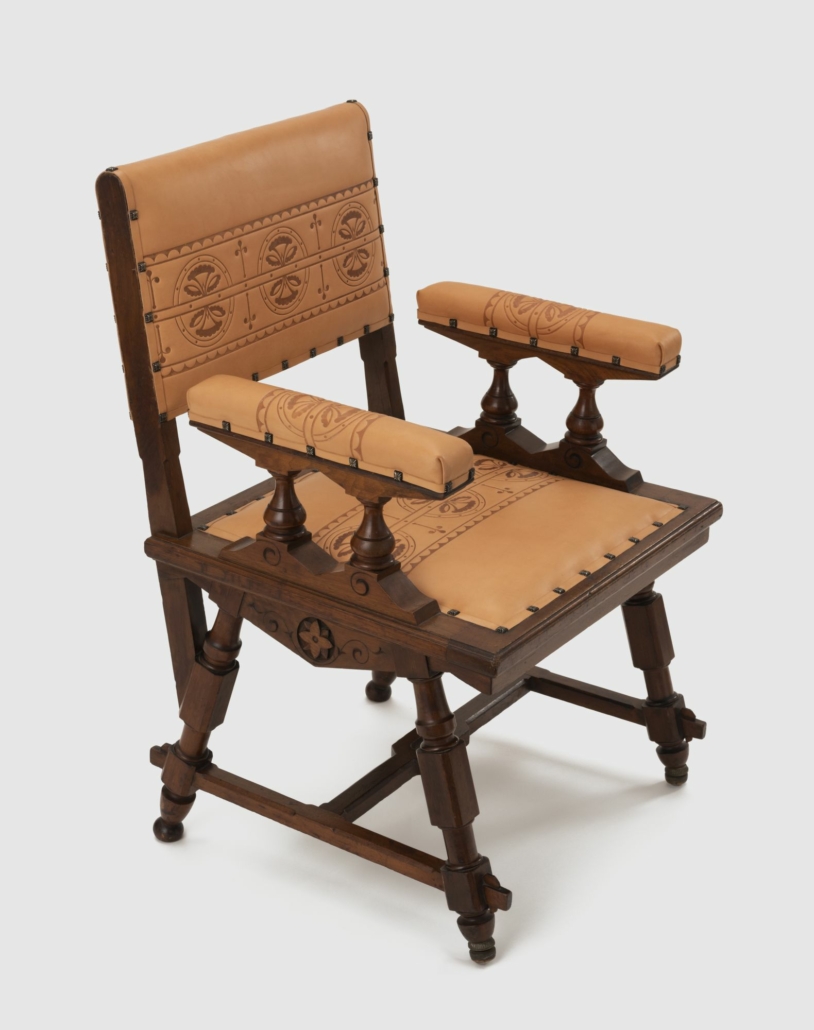 The exhibition is organized in a series of nine thematic groupings that trace the partnership of Anton Kimbel and Joseph Cabus from 1863 to 1882, and their impact on the Modern Gothic style of the nineteenth century. Beginning with an introduction to Gothic Revival and its later manifestation as the Modern Gothic style, the exhibition opens with early furniture forms designed by Kimbel and Cabus, as well as a rare album of digitized 19th-century photographs that demonstrate the wide range of forms produced by the firm. Particular attention is paid to Kimbel and Cabus’s critical success at the 1876 Philadelphia Centennial Exhibition, which boosted their fame across the United States, with associated texts and ephemera accompanied by enlarged images of their magnificent Centennial display. 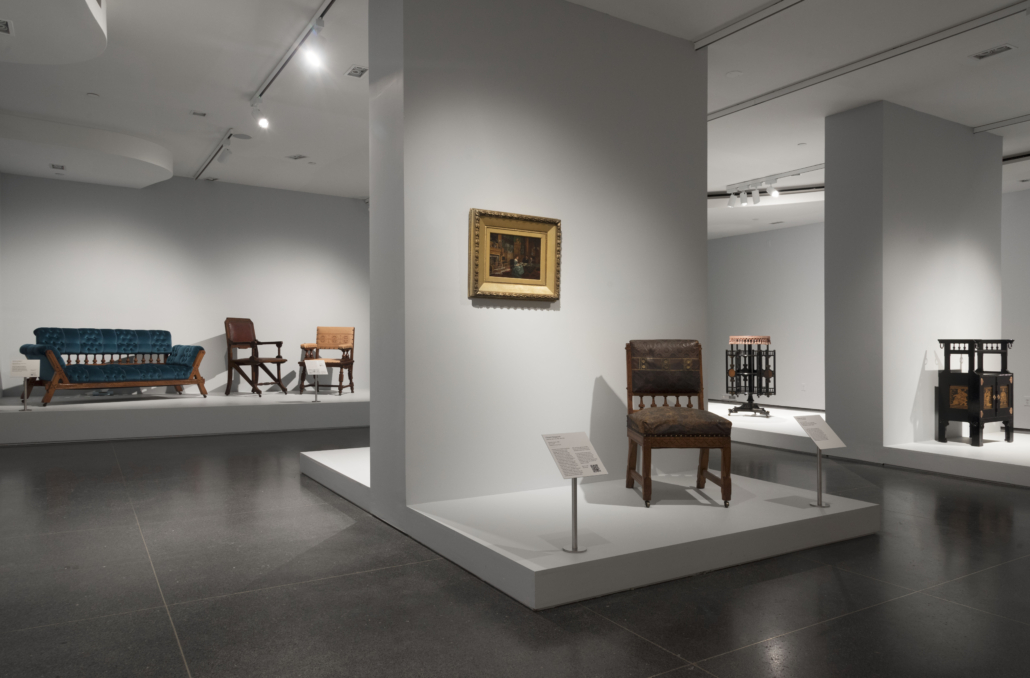 A variety of the firm’s quirky, smaller Modern Gothic forms will also be on view, with richly decorated with paper panels that depict medieval-style figural, geometric, or abstract botanical motifs, plus a vignette (room setting) that the Museum created based on period illustrations to demonstrate Kimbel and Cabus’s furniture in context with appropriate decor. The final gallery highlights Modern Gothic masterpieces, including monumental desks and dramatic ebonized cabinets, that epitomize the firm’s work at the peak of their success.

Visit the website for the Brooklyn Museum of Art and see its dedicated page for Modern Gothic: The Inventive Furniture of Kimbel and Cabus, 1863-82.