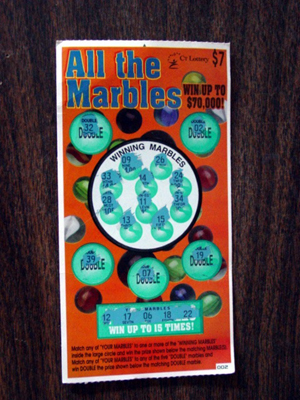 Members of the Global Lottery Collector’s Society look primarily for scratch-off tickets, like this 2002 ticket from Connecticut. The used $7 ticket—not a winner—resold sold for $1. Image courtesy of LiveAuctioneers.com Archive and Block’s Marble Auctions.

PHILADELPHIA (AP) – Amid mountains of losing lottery tickets piled high in a hotel conference room, someone may yet hit a jackpot.

But it won’t be money that makes the winner. For members of the Global Lottery Collector’s Society, the scratch-off cards themselves are worth keeping because of their quirky themes and colorful designs.

From a $3 Montana lottery ticket based on the game Uno to a series of $2 Star Trek stubs from Virginia, the game themes run the gamut from movies and TV shows to sports teams and holiday cheer. The cards come in different sizes, shapes and denominations.

“The whole purpose of collecting is not to get rich, or to get lucky, but to get the tickets,” said club co-founder Bill Pasquino. “But if I happen to hit a jackpot along the way, I’d be very happy.”

This weekend, Pasquino is joining about two dozen other club members at the group’s annual Lotovention. Held this year in Philadelphia, the gathering is an opportunity to meet other self-described “lotologists,” trade tickets and take a gander at the never-ending multitude of collectible material.

Pasquino, 64, a retired teacher from Lancaster, Pa., said that when the club started in the late 1980s, only about a dozen states had lotteries—and none would issue more than six tickets per year.

Today, 43 states plus Washington, D.C., Puerto Rico and the U.S. Virgin Islands have lotteries, as do countries across the world.

Pennsylvania alone issues between 55 and 65 new instant games a year, according to state lottery spokeswoman Elizabeth Brassell. Recent scratch-offs include the $10 “Stacks of Cash” ticket—top prize $200,000—and the cheaper $1 “Dice Doubler,” with a jackpot of merely $2,000.

While the club focuses on modern scratch-off tickets, lotteries in the United States date to Colonial times. Princeton University’s library boasts a collection of tickets from 1761-1826, noting that lotteries were common sources of public financing because there were relatively few banks.

Benjamin Franklin financed cannons for the Revolutionary War through lotteries, while Thomas Jefferson disposed of most of his estate through such tickets, according to Princeton archives.

Modern lottery stub collectors get their goods through buying or trading, and occasionally through friendly vendors or distributors who save voided sample tickets for them, Pasquino said.

Most collectors actually scratch the tickets to see if they win—Pasquino’s biggest prize so far is $500—though some leave them untouched, forgoing a possible jackpot to keep them pristine. The club does not take a stance on gambling.

At the convention on Friday, club vice president Steve Gilbert hoped to find a set of eight Pennsylvania lottery tickets from the late 1970s—the only state-issued stubs he doesn’t have in a trove of thousands. The “Multi-Million Sweepstakes” were sold only at Penn National racetrack, he said.

“The older tickets are very difficult to find,” said Gilbert, of Philadelphia.

That’s partly because there were fewer collectors back then. But despite the proliferation in scratch-offs, the club has seen its membership wane in recent years—from about 550 at its peak to 150 or 200 today, according to Pasquino.

Pierre and Anne-Marie Lasnier, who are in their 60s, traveled to Lotovention from the small town of Le Plessis Dorn, France. They came to see what they could add to a collection that includes French national lottery tickets dating back to 1933.

They brought with them hundreds of sample tickets from France: 3 euros for a Valentine’s Day-themed ticket; 5 euros for one offering a chance at “Vacances a vie”—vacation for life.

The couple posted a note at their table to let people know they’re seeking lottery tickets featuring images of M&Ms candy, Betty Boop, Pink Panther, Elvis and the zodiac. They had no luck in the first few hours of the gathering on Friday.

“Not yet,” Anne-Marie Lasnier said. “But we have time.”

Kathy Matheson can be reached at www.twitter.com/kmatheson 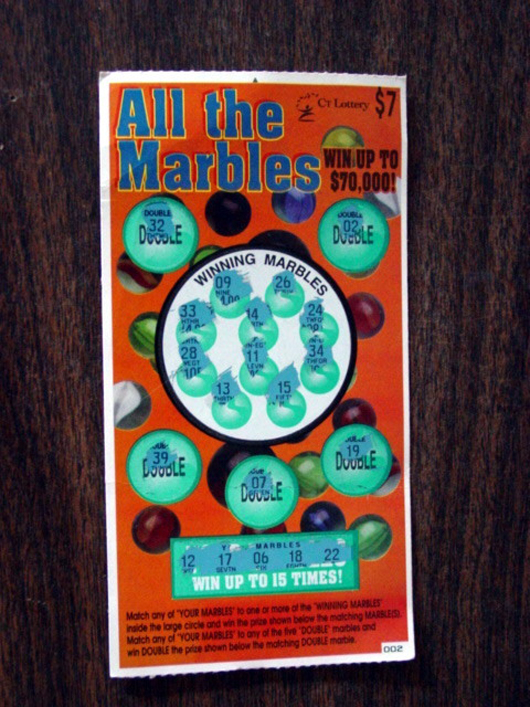 Members of the Global Lottery Collector’s Society look primarily for scratch-off tickets, like this 2002 ticket from Connecticut. The used $7 ticket—not a winner—resold sold for $1. Image courtesy of LiveAuctioneers.com Archive and Block’s Marble Auctions.