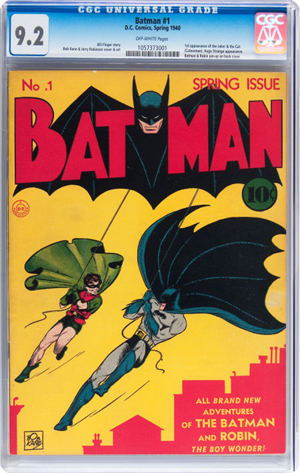 DALLAS – Frank Miller’s original cover art for the second issue of his landmark 1986 masterwork, The Dark Knight Returns, brought $478,000 and the highest-graded copy of Batman #1 ever certified—a 9.2 grade by CGC Near Mint Minus—brought $567,625 to lead Heritage Auctions’ $6.7+ million Comic and Comic Art event on Aug 1.

The image of Batman, aged, gnarled and boiling with rage, on the cover of the second issue of Frank Miller’s 1986 masterwork, The Dark Knight Returns, set fire to the imagination of generations of collectors and was the key moment in the revival and reinvention of an historic franchise. It is the only cover in the landmark series to feature Batman—the other three are all silhouette images.

“When the smoke cleared, this ended up as one of the best comic auctions we have ever had,” said Barry Sandoval, director of operations for comics and comic art at Heritage. “Four comic books and three comic art lots topped $100,000 and a number of lots sold for multiples of what we had anticipated. Also, the strongest selection of vintage comic strip art we had offered in a while was rewarded with strong prices.”

For fans of classic paper, the highest-graded copy of Batman #1 ever certified—a 9.2 grade by CGC Near Mint Minus—represents the pinnacle of collecting, save only a handful of comics (Action Comics #1, Detective Comics #27, the first appearances of Superman and Batman, respectively, among them), and its sale for more than a half million dollars solidifies its place in the pantheon of American pop culture.

Fans of original art didn’t stop with Dark Knight #2 as Frank Frazetta’s 1970 cover painting for Vampirella #5 sold for $286,800. Original cover art for The Avengers #134, a raucous meet up of the Human Torch and Mad Thinker plus the Origin of the Vision storyline with art by Silver and Bronze Age legend Gil Kane and Joltin’ Joe Sinnott, fetched $41,825

Multiple bidders completed to own high-grade examples of the most coveted comic books ever produced, including a 3.0-grade copy of Auction Comics #1 which sold for $388,375, and an 8.0-grade copy of All-American Comics #16, which changed hands for $203,150. One of two known copies of a 9.2-grade copy of Fantastic Four #1, with a White Mountain pedigree, sold for $191,200 and a near pristine copy of an increasingly popular comic book, Avengers #1—in stunning 9.4 grade—sold for $95,600.

Robert Crumb’s complete 1968 original art for a five-page story titled City of the Future, initially stolen from Crumb and slated for Zap Comix #1, realized $101,575. Fresh-to-market original cover art from titans Carmine Infantino and Joe Giella from The Flash #117, from 1960, crossed the block for $71,700 in its first appearance at auction.

Perhaps two of the most anticipated original comic art lots to cross the block link Jack “King” Kirby to a covert Iranian rescue operation as depicted in the Academy Award-wining film Argo. The film tells the story of how the CIA used a fake movie production crew to conceal a daring rescue mission of six Americans held in Iran. The “movie within a movie” was at one time a genuine project titled Lord of Light, based on the novel by Roger Zelazny. Producer Barry Geller commissioned Jack Kirby to create a set of concept drawings for the film, but the project stalled and was mostly forgotten, until the CIA used it in their top-secret mission. Two of Kirby’s original oversized concept scene drawings for the project—Pavilions of Joy, sold for $16,730, and Planetary Control Room (Interior), sold for $23,900.

A 3.5-grade copy of Captain America Comics #1, sporting the famous image of Cap socking Adolph Hitler into next Tuesday, and signed by co-creator Joe Simon himself, sold for an impressive $32,265;

The eye-popping title page from the Double Life of Private Strong #1 by Jack Kirby and Joe Simon, is expected to cross the block for $20,315. 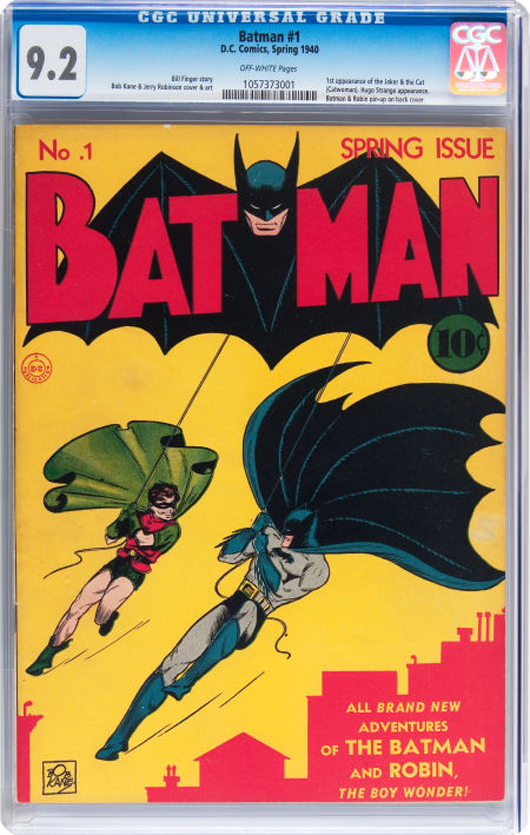 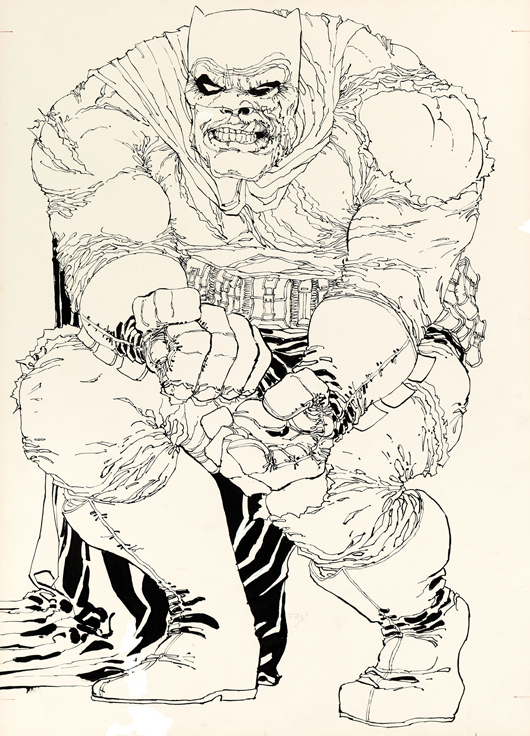