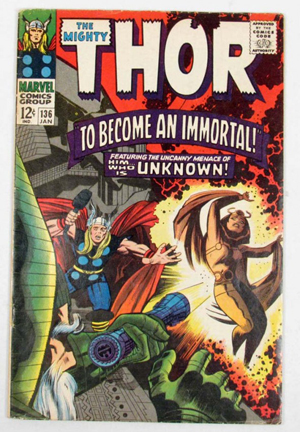 Thor, pictured on the cover of ‘The Mighty Thor No. 136,’ has been a smash hit at the box office. Image courtesy of LiveAuctioneers Archive and Pioneer Auction Gallery. The Mighty Thor and all Marvel characters and the distinctive likeness(es) thereof are trademarks & Copyright © 1966 Marvel Characters, Inc. All rights reserved.

WESTMINSTER, Md. (AP) – A Westminster business is hoping Thor, Captain America and the Green Lantern can help generate sales this summer. After all, this business is selling products with the superheroes’ faces on them.

“I’m looking forward to the release of the movies and hopefully they do well,” Forney said. “And if they do, I anticipate they will generate more business for me, but, more importantly, I hope the movies are good and everyone enjoys them.”

Thor opened in theaters on May 6, Green Lantern opens June 17 and Captain American: The First Avenger opens July 22. Forney doubled his stock of Thor and Captain America comics and graphic novels. He usually has about 11 different volumes, but he now has more than 20 in stock. He’s also increased his stock of Green Lantern comics and graphic novels by 50 percent, and he stocked up on back issues in case a reader wants to catch up on a series before a movie is released, Forney said.

Sometimes comic book adapted films have a positive impact on business, Forney said, but sometimes they do not.

“It really depends if it’s a good movie or not,” Forney said. “If it’s a bad movie, there’s very little chance it’s going to motivate people to come in the shop.”

For Forney, the most recent biggest impact a film had on business was in 1989 when Batman, starring Michael Keaton was released.

“That was a well-received movie with an all-star cast,” Forney said. “It was also darker and grittier than previous superhero movies, so that kind of gave way to new possibilities for comic book movies.”

Comic book fan Samantha Weaver, 19, is planning to see both Thor and Green Lantern when they come out in theaters.

“For the comic books, Thor is great because it has really strong villains and Green Lantern is neat because of all the abnormal powers,” Weaver, of Westminster, said while shopping earlier this month at Gotham Comics. “If the movies are good people might be pushed to read the books.”

Sam Robinson, store manager at J&M Comics and Games in Eldersburg, said comic book movies help business, but more so leading up to the movie rather than after it.

“We see a lot of people coming in and trying to get the older books for whatever movie is coming out and we’re seeing a lot of that for Green Lantern right now,” Robinson said. “People definitely like to refresh themselves on the story so they’re all ready when they go to the movie.”

Other comic shops in Maryland and Pennsylvania are also stocking up on items to supply new and old customers.

When Iron Man was released in 2008, comic sales increased by 10 to 20 percent, said Charles Fitzsimmons, store manager of Cards Comics and Collectibles in Reisterstown. The shop was selling 30 Iron Man comics per month, but after the movie debuted the shop began selling 35 to 40 per month, he said.

With Thor and Green Lantern debuting soon, Fitzsimmons is expecting the store’s stock of action figures to fly off the shelves.

“They are definitely going to sell,” Fitzsimmons said. “I think Thor could have the most impact because noncomic book fans may be interested in the mythological aspect of it.”

Comix Universe in Hanover, Pa., has added five to 10 Thor-based comics and graphics novels to its normal supply, said Rob Bream, co-owner of the comic shop. This summer, Bream said he is expecting a jump in comic and graphic novel sales because Thor and Captain America both tie in to next summer’s release of The Avengers.

“Every year more and more people are getting interested in these movies,” Bream said.

In preparation for the Green Lantern, the store will be receiving a special collection of five comics, with each one showcasing a main character in the movie, Bream said.

Douglas Cathro, an employee at Beyond Comics in Frederick, said the shop has stocked up on Thor hammers and helmets, and Green Lantern mask and ring light up sets.

“Thor and Green Lantern are the two big ones right now,” Cathro said. “We’re expecting a lot of new and old customers.”

Some new customers come in because they want to learn the history of a certain character, Cathro said.

Copyright 2011 Associated Press. All rights reserved. This material may not be published, broadcast, rewrittin, or redistributed. 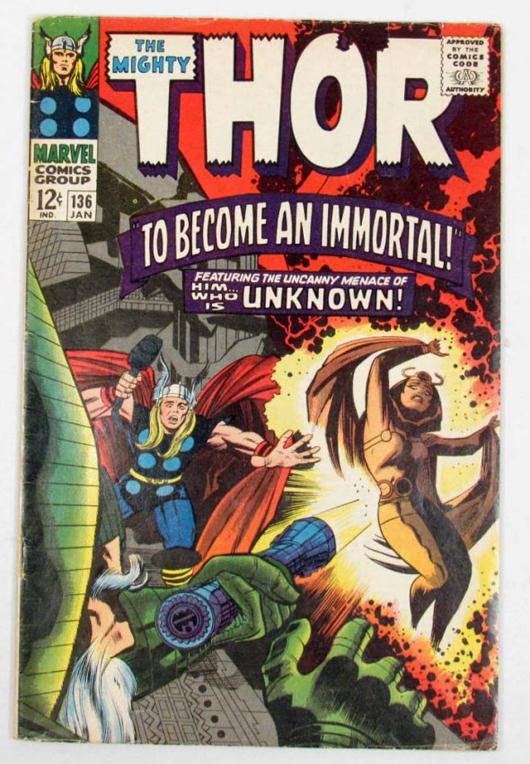 Thor, pictured on the cover of ‘The Mighty Thor No. 136,’ has been a smash hit at the box office. Image courtesy of LiveAuctioneers Archive and Pioneer Auction Gallery. The Mighty Thor and all Marvel characters and the distinctive likeness(es) thereof are trademarks & Copyright © 1966 Marvel Characters, Inc. All rights reserved.