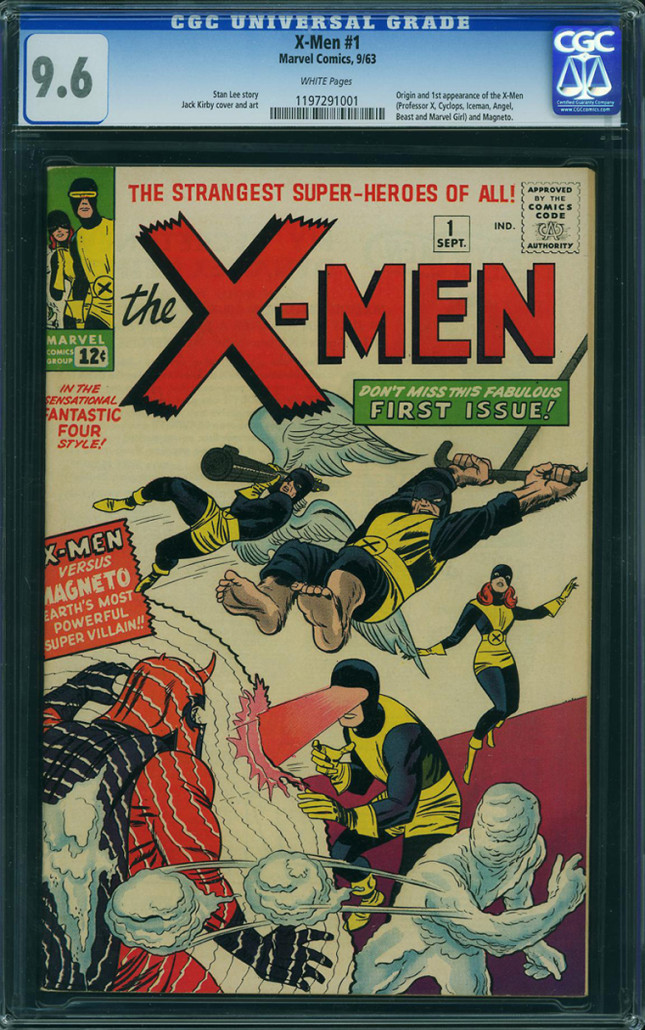 PORTLAND, Maine – A 1963 issue of X-Men #1 sold privately on February 19th for a record $350,000. ComicLink reported the sale of the rare-condition title, which was graded 9.6 out of a possible 10 by the independent third-party Certified Guaranty Company, or CGC. The issue sold through ComicLink’s online marketplace, Comic Book Exchange.

“X-Men #1 is a desirable comic book in any state, but the higher the condition, the fewer there are,” said Josh Nathanson, president of ComicLink.

CGC has certified that there are 3,285 known examples of X-Men #1 worldwide. Of that group, three are in 9.6 condition. Only two have been CGC-graded 9.8.

“With only five known examples in 9.6 condition or better, there’s no mystery about the issue’s scarcity. Everyone in the business knows how many are out there, and there’s far more demand than supply, so it’s reasonable that an investor would pay $350,000 to own one of the five best,” said Nathanson.

Although X-Men #1 had a healthy initial print run, its 1963 publication date puts it very early in the period when comic books were just beginning to be saved by collectors for posterity. Not many examples of the first X-Men issue were preserved with care, hence their scarcity today.

While rekindling childhood nostalgia may be the catalyst that drives many to collect comics, investment and the potential for appreciation are unquestionably why Silver Age comics like X-Men #1 are achieving mid-six-figure prices, and climbing, said Nathanson.

“When the stock market takes off, the prices on certain comics level off, but when the market is more volatile and turns down, money comes out of the market and needs someplace to go. People start looking for reliable alternative investments, like rare comics. It’s happened enough times, now, that we can identify the pattern,” Nathanson said.

“My own opinion is that the best days for vintage comics are still ahead,” Nathanson said. “A comic book fan base can cross several generations and keep building, especially if there’s a movie franchise based on the characters. We expect to see another spike in demand for X-Men comics when the film ‘X-Men: Apocalypse’ opens this Memorial Day weekend.”

Why is X-Men #1 so Important in the Comic Book Collecting World?

The X-Men were created by the legendary team of Stan Lee and Jack Kirby, who created most of the Marvel Universe during a fertile period of the early 1960s. Their characters included not just the X-Men, but also the Fantastic Four, the Hulk, Iron Man, Thor, Ant-Man, the Avengers and dozens of others who would go on to form the most popular collection of fictional characters in the world.

The original X-Men team consisted of Professor Charles Xavier and his teenage mutant students, Cyclops, Beast, Angel, Iceman and Marvel Girl/Jean Grey. The first issue introduced all six of these characters, as well as the X-Men’s main foe, Magneto. According to Josh Nathanson, “No other key issue of a comic book has introduced so many important characters in a single issue – all seven characters have remained a critical part of the Marvel Universe for over 50 years now.”

In 1975, the X-Men team became an international force with the addition of a furry Canadian mutant named Wolverine. With engrossing storylines by writer Chris Claremont and the art of Dave Cockrum and, later, John Byrne, the team took off in popularity like no other comic book in the history of the medium. In 1980, in a controversial move, Claremont and Byrne killed off Jean Grey, who had become the all powerful but out-of-control Phoenix. The story was so compelling that it ignited a franchise that would dominate the comic book industry for decades. In the early 90s, the X-Men made history when a new X-Men #1 sold a record eight million copies (Today, a comic is considered a major hit if it sells 100,000 copies).

A very popular cartoon series followed, cementing the team’s popularity with an entire generation of young children. In 2000, the X-Men were introduced to movie audiences, with Hugh Jackman playing Wolverine and Patrick Stewart and Ian McKellen playing Professor Xavier and Magneto, respectively. The movie was a major hit and sparked the 21st-century craze for superhero movies. The film generated multiple successful sequels. The mega-successful character Deadpool is a spinoff of the X-Men franchise, and members of the team are featured in the wildly popular Deadpool movie released on Feb. 12, 2016.

Met museum settles lawsuit based on use of one word