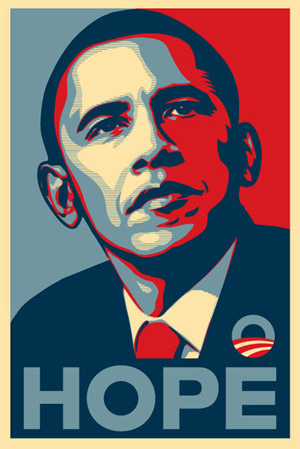 WASHINGTON (AP) – Gone are the huge crowds for President Barack Obama’s inauguration. Left behind is political junk fit for a museum.

Larry Bird and Harry Rubenstein, curators from the National Museum of American History, collected dozens of objects, from hats and homemade signs to buttons and other paraphernalia, to tell the story of the first black president to future generations.

“You really felt that you were part of something that was bigger than yourself,” said Bird. He ventured out Jan 20 and combed through the million-plus crowd to find unique items the museum could use.

People wrapped themselves in Obama blankets. Vendors sold every Obama button imaginable. It’s a moment that curators might need to capture someday in an exhibit, so they’ve been working to collect as many as 100 different Obama items.

As Bird waited in the crowd for Obama’s swearing in, something caught his eye. The woman next to him was wearing a black bowler hat with a pink trim and about 16 Obama buttons attached all the way around.

“It’s really not fair to interrupt people” as they begin to get into the event, Bird said, though he didn’t want to miss a chance for the hat. He quickly introduced himself to the woman, Valerie from New Jersey, handed her his business card and asked if she might send the hat back to the museum after she gets home.

“It was her thing, making a hat,” he said. “It was another level of involvement.”

But Bird didn’t write down Valerie’s last name and didn’t want to take her hat on Inauguration Day.

Bird and Rubenstein have collected items throughout the presidential campaign and at the political conventions. Some people don’t want to give up their souvenirs, though.

“What’s nice is the ones that say no, and then they send it in later,” said Rubenstein, chairman of the museum’s politics and reform division. “The things that are hardest to give are the things that have special meaning for people.”

Besides asking for the homemade hat, Bird picked up some imitation credentials and an Obama baseball cap from a vendor. And he picked up some signs that were left behind. One said, “Mr. President, I Hope for Peace.”

Official items from inaugural organizers will also join objects the museum has collected in recent weeks, such as the Obama action figure and an Obama periscope to help people get a glimpse of the president from the massive crowd. They will be added to a collection of about 90,000 political history objects that includes a sign from Thomas Jefferson’s inauguration that reads “John Adams is no more” and Abraham Lincoln’s top hat worn when he was assassinated.

“The rule of thumb that we use is anything that’s made to be a collectible isn’t,” Bird said.

So the museum focuses on collecting things that people make and wear. And it takes some guesswork as to what will be historically significant years later.

“To be able to get it at that moment, to say it came from this spot, this moment, this place in time – that’s what we want,” Bird said.

The first few Obama items were to go on view last weekend in the museum’s “The American Presidency” exhibit – perhaps a novelty Obama license plate or a toy train in the exhibit’s inauguration case, Rubenstein said.

The National Museum of African-American History and Culture, which the Smithsonian Institution plans to open in 2015, also has been scooping up Obama items. Curators plan to recreate one of his campaign field offices from Virginia with items including election maps, strategy boards, campaign literature and even a Lazy Boy chair.