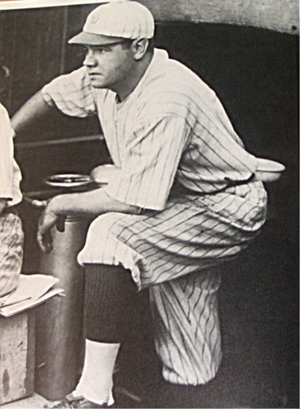 Babe Ruth in the dugout during his first season with the New York Yankees in 1920. Image courtesy Wikimedia Commons.

A baseball jersey worn by The Bambino sold for more than $4.4 million Sunday, a record for any item of sports memorabilia, according to the buyer and seller.

SCP Auctions, based in California, said the circa 1920 New York Yankees uniform top is the earliest known jersey worn by Ruth and it fetched $4,415,658 at the company’s April auction, which ended Sunday. That price broke the previous record of $4,338,500 set in 2010 for James Naismith’s founding rules of basketball.

Lelands.com, a sports memorabilia company, said it submitted the winning bid for the jersey, which had been displayed for years at The Babe Ruth Birthplace Museum in Baltimore. The road top has “New York” sewn across the front and the Hall of Fame slugger wore it shortly after he was sold to the Yankees by the Boston Red Sox for $100,000 following the 1919 season.

Suzan French, a spokeswoman for Lelands.com, said the company plans to sell the jersey privately rather than auction it.

“Such a spectacular piece will find a home with one of our private clients who truly appreciates its historic significance,” Lelands.com president Michael Heffner said in a statement.

Ruth retired in 1935 with 714 home runs, the major league record for nearly 40 years. Hank Aaron broke that mark and then was passed by Barry Bonds, who finished with 762.

In addition, Ruth’s 1934 New York Yankees cap that was owned by former major league pitcher David Wells sold for $537,278 at auction. The colorful Wells bought the cap for about $30,000 from a collector and famously paid homage to his idol by wearing it on the mound with the Yankees during a game on June 28, 1997.

“This proves again that Babe Ruth is ‘king’ in the sports memorabilia world,” SCP Auctions president David Kohler said in a statement.

Also included in the auction was the high-end baseball card collection belonging to former big league All-Star Dmitri Young. Top prices were a 1954 Hank Aaron rookie card ($537,954) and a 1955 Roberto Clemente rookie card ($432,690). The proceeds will help Young begin a foundation to help kids and student athletes near his home in Ventura County, Calif. 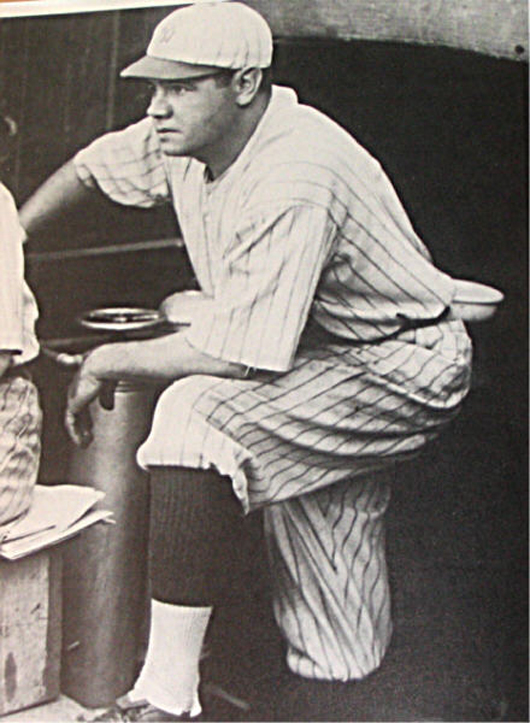 Babe Ruth in the dugout during his first season with the New York Yankees in 1920. Image courtesy Wikimedia Commons.