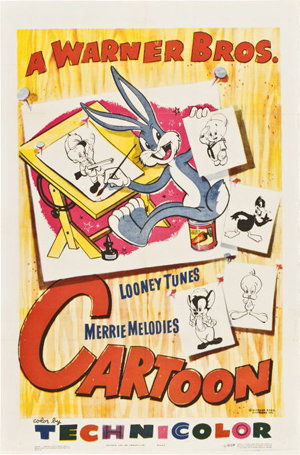 Tex Avery had departed Warner Bros. 11 years earlier, but his influence was still present in this 1952 one sheet that featured his signature character, Bugs Bunny. Image courtesy Heritage Auction Galleries and LiveAuctioneers Archive.

Avery created the wisecracking Bugs Bunny and awarded him the signature, “Eh, what’s up, doc?”

He first heard the line at North Dallas High, where he graduated with the Class of 1926. Standing in the cavernous hallways, one can almost hear Roaring ’20s teenagers passing one another during class changes. “Hiya, doc.” “What’s new, doc?” “What’s up, doc?”

Avery, who died of lung cancer in 1980, once told an interviewer that Daffy Duck was born on White Rock Lake in East Dallas, where he and his friends hunted ducks.

Avery’s animated films – that’s what academics call cartoons – are enjoying a renaissance at his alma mater this month. In a narrow, whitewashed hallway between the cafeteria and a computer lab, students are painting color-drenched murals depicting the Avery characters Bugs, Daffy, Elmer, sad-eyed Droopy the dog, and the rest.

“I grew up watching them on Cartoon Network,” said Jesus Martinez, one of the student muralists.

“I like the ones with Foghorn Leghorn and Droopy,” said Noland Sowels, a 17-year-old senior.

Even though Avery created his best cartoons in the 1930s and ’40s, they still appeal to young people today. The reason, probably, is because the stories are fast-paced and infused with satire, irony, sex and violence. Above all, they’re funny.

These cartoons started out among the “short subjects” preceding a feature film at theaters. In the late ’40s, many were resurrected for television. Today, they live in DVD collections and on cable channels.

Walt Disney was the cartoon king of Avery’s era. Think of Mickey Mouse and Goofy or Jiminy Cricket and Snow White. Disney characters were sweet, earnest and without rough edges. Avery and his crew decided to go the other way, creating edgy characters such as Red Hot Riding Hood and the wolf who lusted after her.

“I think he brought Texas attitude to his work,” said Robert Musburger, professor emeritus at the University of Houston and a noted animation historian. “His characters had a certain cockiness get out of my way because I’m always right. Bugs was the epitome of that character.”

And it all started in Dallas.

The student artists are competing in a contest to paint the best mural of Avery’s characters. Winners will be declared later this month. Teachers say incidents of illegal graffiti have decreased recently, because students can use the cartoon contest as an outlet. But the North Dallas teachers who created the mural contest set a bigger goal.

“We want our students to know that great people went to school here, and that there are great people here today,” said Gordon Markley, a business teacher who came up with the idea of using Avery to make that point.

Avery left Dallas after high school and briefly attended an art school in Chicago. But he chafed under the discipline of structured classes. He returned to Dallas and worked odd jobs for several months before moving to Los Angeles.

Tex Avery rendered this artwork for the North Dallas High School yearbook when he was a student there in the ’20s. Avery had penned some cartoons in high school for the yearbook and school newspaper, but they weren’t very good. His attempts to sell a cartoon strip to California newspapers went nowhere.

After a while, he landed a job with Walter Lantz studios, which years later produced the Woody Woodpecker cartoons. But he and Lantz fell out over money, and Avery moved on to Warner Bros. studios, where he worked from 1935 to 1941. As a director, he was responsible for bringing together the whole cartoon the story, the music, the writing and the animation.

Chuck Jones, a fellow director who created the Road Runner/Wile E. Coyote series, called Avery “a genius” and credited him with moving cartoons from realism to surrealism, meaning that Bugs could do things like moving a hole in the ground from one place to another so Elmer Fudd could fall into it.

Anything could happen in a Tex Avery cartoon.

“Tex took things to another level,” said Jerry Beck, an animation historian in Los Angeles (cartoonbrew.com). “He is right up there with the greats of comedy like Buster Keaton and Charlie Chaplin. And as a director, he is way up there, too.”

Avery was as introspective as he was zany. Later in life, he lamented spending too much time at work and neglecting his wife and two children, one of whom died of a drug overdose in 1972. He later divorced and lived alone in a small apartment. He died in Los Angeles at age 72.

Avery created enduring images that cause people to exclaim, “Oh yeah, I remember that!”

Late in his career, he directed television commercials. One of the most successful was for Raid, the insecticide. A cartoon cockroach’s eyes get wide, he screams “RAID!” and lands dead on his back.

The best example is Wolfie, the amorous rogue who appears in a series of cartoons that lay waste to the Little Red Riding Hood children’s story.

When the wolf first spots the sexy Red Hot Riding Hood, his eyes bug out of his head, and his body becomes horizontally erect in a metaphor that adults understand. It’s called a “take.”

“Tex loved the wild takes,” Beck said. “Every part of a character’s body would fly apart and come back together.”

The Mask, a 1994 Jim Carrey movie that incorporated animation and live action, paid homage to several “Averyisms.” In one scene, the cartoon version of Carrey’s character spots Cameron Diaz in a nightclub. His eyes pop out, his jaw literally drops to the floor, and his tongue unrolls like a fire hose.

The 1988 movie Who Framed Roger Rabbit? features a cartoon character named Jessica Rabbit, a sexpot with more curves than a mountain road. Red Hot Riding Hood was the inspiration for Jessica, according to animation historians.

In some cases, Avery acknowledged that he had gone too far in creating scabrous characters with sketchy morals and values.

Take the misanthropic Screwy Squirrel, who starred in five Metro-Goldwyn-Mayer cartoons that Avery directed between 1944 and 1946.

The first Screwy Squirrel cartoon opens with cute, cuddly Sammy Squirrel merrily dancing through a pastoral forest setting. Sammy is childlike, with a sweet voice clearly a parody of a Disney character.

“What kind of a cartoon is this going to be, anyway?” Screwy asks Sammy.

“The story is all about me and my cute little furry friends in the forest,” Sammy answers.

A disgusted Screwy takes Sammy behind a tree, beats him senseless and then takes over the cartoon. For the next seven minutes, Screwy inflicts torment on a not-too-bright dog named Meathead.

“Tex Avery had no patience for the earnest world of the saccharine sweet,” said Kirsten Thompson, an animation historian at Wayne State University in Detroit.

“He wanted to mock it and spoof it.”