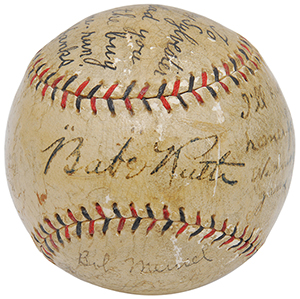 WESTHAMPTON, N.Y. – The “Little” Johnny Sylvester collection, a unique family-owned archive documenting one of the most famous stories in baseball history, will be auctioned on February 6. The centerpiece of the collection is the baseball Babe Ruth signed and sent to Sylvester, a gravely ill 11-year-old boy, together with a promise to “knock a homer” for him. As history would show, the young fan made a remarkable recovery after receiving the baseball and learning that Ruth had kept his promise.

Perhaps the most publicized baseball of all time, it was autographed by Ruth and inscribed with the words “I’ll Knock A Homer For You” on one of the panels. Five other New York Yankees also autographed and inscribed the ball.

The story of Little Johnny was embraced by the media and struck a chord with all Americans, not just sports fans. Shortly before October 6, 1926, Babe Ruth and the Yankees sent the signed baseball to Little Johnny, who was hospitalized near his home in Essex Falls, New Jersey. The youngster had been seriously injured after falling off a horse and being accidentally kicked in the head. Learning of the incident and Sylvester’s devotion to the Yankees, the team sent the baseball to Sylvester from St. Louis, where they were playing the Cardinals in the 1926 World Series.

“Ruth had promised to hit a home run for Little Johnny and, amazingly enough, he hit not one, but three homers in Game 4 of the Series. It was the first time Ruth had ever belted three in a game, and in so doing, he became first player to do so in a World Series,” said Richard E. Russek, president of Grey Flannel Auctions, the company producing the auction.

The young patient’s spirits were lifted by the gesture, and three days later (Game 6), Ruth sent a hand-written letter stating he would try to hit another homer for Johnny, “maybe two.” The day after Game 7, October 11, 1926, Ruth personally visited the youngster in Essex Falls. On December 16, 1926, Ruth penned another letter to the boy, inquiring about his recovery and inviting him to Yankee Stadium for the 1927 World Series “to help win another pennant.”

Ruth wasn’t the era’s only sports star to reach out to the ailing Sylvester. “Big Bill” Tilden, one of the greatest tennis players of all time, sent Johnny three hand-written letters, wishing him well, and even sent the boy an autographed tennis racquet he had used in the U.S. National Championships (now known as the US Open).

Hall of Fame halfback “Red” Grange, a friend of Ruth’s, also sent a letter to the kid, promising to score a touchdown just for him. In his letter, Grange invited Johnny and his father to a game, and also gifted the boy with an autographed football.

The Little Johnny Sylvester collection, which includes all of the aforementioned items, was on loan to the Babe Ruth Museum for more than 25 years and comes to auction directly from its owner, John Sylvester Jr.

Grey Flannel has auctioned many legendary items connected with the Yankees, including Babe Ruth’s 1932 “Called Shot” game-used jersey, which they sold in 2005 for $1,056,630. The Feb. 6 auction includes many other rare and important Yankees items, including a 1919 Frank “Home Run” Baker game-used road jersey, the earliest known jersey of any Yankees Hall of Famer. 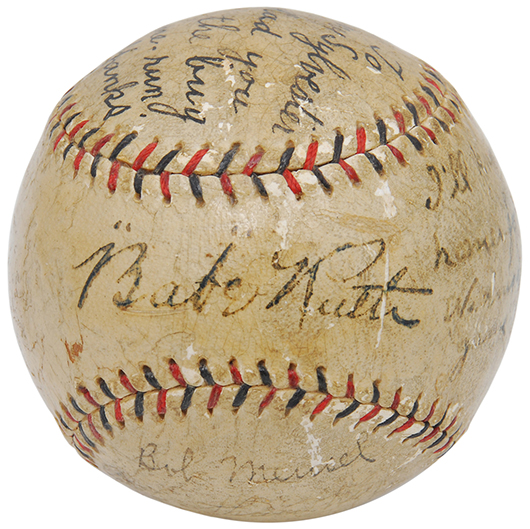 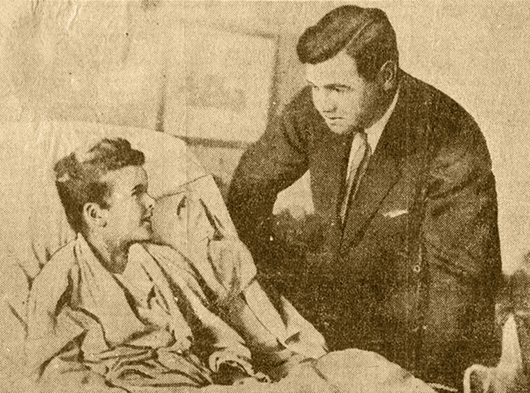 Hats off to DiMaggio & Ruth, whose super-rare caps are headed to auction