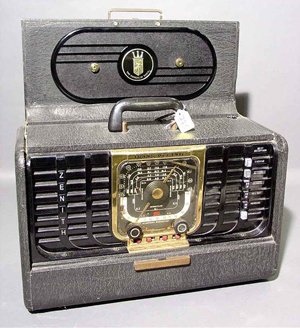 ARNOLD, Md. (AP) – Dr. Steve Hansman likes to think of himself as a kind of archaeologist.

But the artifacts he seeks aren’t buried in the dirt. They’re at flea markets and antique shops, posted on eBay, or available by networking through people who share his passion.

“Every week or two I see something I’ve never seen before,” he explained.

That’s saying something, because the basement of his Arnold home functions as a mini-museum. He’s a family physician, but as far as his hobby goes, he’s a radio-logist.

Hansman has about 200 vintage radios, not to mention old-time advertisements, a few Victrolas, and a workshop filled with boxes and boxes of all kinds of vacuum tubes and other replacement parts. Vacuum tubes gave way to transistors after they were developed in the 1950s.

The old radios aren’t necessarily worth a lot of money; they’re more valuable in terms of reminiscences and a window to the evolution of technology. “It’s not just about the equipment, it’s the whole history,” Hansman said.

His particular interests are radios from the 1920s, which encompass the first models widely sold to the general public. He has a 1921 Kennedy that more than anything resembles lab equipment. Beginning in the late ’20s, manufacturers started to make much more ornate models. Hansman has plenty of those, too. “That’s when they started to become more like furniture,” he said.

Among his collection is a 1937 radio that doubles as a bar, and another with rotary tuning reminiscent of old telephones. But the president of the 700-member Mid-Atlantic Antique Radio Club is quick to point out he knows people with larger collections.

Not all of Hansman’s radios work, but he’s repaired quite a few. When he turned on the Kennedy last weekend, it took a few seconds to warm up before the Baltimore Orioles game came over the speaker. There was a bit of static, but it lent itself to the old-time feel.

Brian Belanger, curator of the National Capital Radio & Television Museum in Bowie, said there’s also a beauty in the glow of the tubes or dials that light up. The museum was founded by club members and opened in 1999.

Club member Steve McAllister of Bowie remembered a similar feeling when he plugged in the first old radio he bought at a neighbor’s yard sale. “It was cool when it lit up, almost like an indication of being alive,” he said.

His particular interest is hi-fi gear from the late ’30s to about 1960. This includes not only radios, but also amplifiers and speakers. The mechanical engineer brought a couple models to Hansman’s home and discussed how elegantly the components were laid out.

McAllister enjoys fixing old radios, as well listening to them. “I enjoy the sound,” he said. “It has a different sound. (It’s) not as clinical, it tends to be warmer.”

The old radios, he added, are exceptional in the mid-range, but not as good as modern equipment with bass or treble.

Compared to the crystal “foxhole” radio built by club member Carl Smith of Annapolis, they’re iPods. Smith still has his very first radio, a 1954 model his parents bought for him—and it’s still in mint condition. The stout black radio, called a Zenith Trans-Oceanic, has a lengthy antenna and holds an equally long string of memories.

“It was fabulous, said Smith, a retired maintenance worker. “It was the cream of the crop. I’d never heard short wave or anything like that. I did a lot of listening at nighttime.”

Hansman traces his interest in radios back to his parents. His father taught electronics, and his mother was interested in antiques.

But he didn’t get his first old model until college, when he visited a Western Maryland farm and found three radios in the attic. The farm’s owner gave him one, and Hansman and his father fixed it up.

His career and the military put a hold on further activity until 1989, when he went to an auction and made a couple purchases. He also found out about the club.

MAARC was founded in 1984 and the majority of its members are from Maryland, Virginia, Washington, D.C., Pennsylvania and Delaware–although 48 states and five countries are also represented. Most are ages 40 to 60, and men outnumber women about 20 to 1.

“I like the whole idea (of old radios),” Hansman said. “With the old parts, it’s easier to understand what’s going on. You can see the wires, see the components.”

He taught himself radio repair, and like McAllister, said there’s a certain satisfaction in getting an old model running.

When Hansman acquires a radio, he examines all the component first. People should never just plug them in because that approach can do damage, he said.

Electric radios were offered as early as 1926, but didn’t become common in cities until 1928 to 1930, Hansman said. Prior to that, radios ran on batteries, and before that, crystals. Early radios were AM, although many also offered short wave. FM was developed in 1926, but the first FM sets didn’t come out until 1939, Hansman said, and became popular much later.

“For me, when I look at my radios, I get a feeling of how America was and how America could be when they produced their own products,” he said. “It reflects a time we like to remember.”

But the sentiment goes even deeper.

Information from: The Capital of Annapolis, Md., http://capitalgazette.com 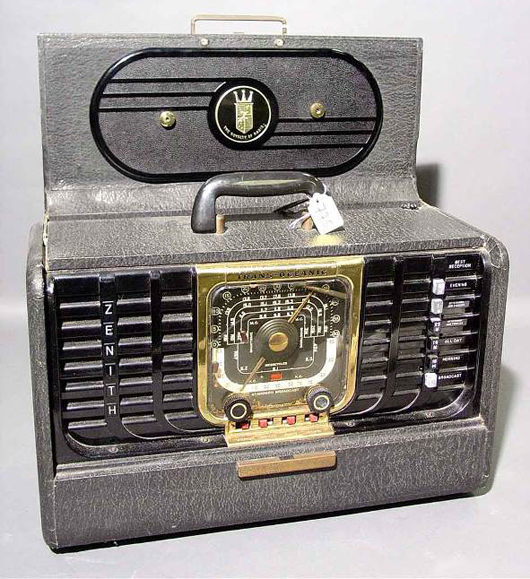