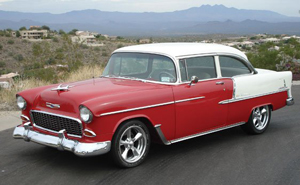 It was love at first sight when Greg Hageness spotted his while deer hunting near Eleva.

Everett Blakeley let his get away but was lucky enough to be reunited years later. Now he wouldn’t consider parting with it.

The object of these Chippewa Valley residents’ affection: their first cars.

Apparently, there’s something about a first automobile that, like a first love, is hard to put in the rearview mirror forever.

“It’s a matter of tying yourself to your youth,” said Blakeley, an Eau Claire developer and car collector. “First cars are historical and help us remember a part of our lives that was so happy and carefree. There are a lot of people who still want a piece of that.”

The strong connection many people forge with their first set of wheels became abundantly clear when more than 50 Chippewa Valley residents responded to a recent Leader-Telegram call for stories about first-car experiences. The tales, focusing on everything from rusty clunkers to dreamy sports cars, were published in a special section called “Memory Lane.”

The fascination with cars goes far beyond just polishing fenders, kicking tires and revving engines. It extends to the natural desire of people – especially teenagers and young adults who’ve never had the ability before – to hit the open road and go wherever they want.

Vance, owner of Ken Vance Motors, has witnessed that special connection time and time again since first coming to Eau Claire 37 years ago and working for car dealer Lee Markquart.

While some buyers are merely looking for a way to get from point A to point B, others develop a real infatuation with what they drive, Vance said.

“There is a lot of nostalgia involved with cars, and there aren’t many products like that,” said Vance, who keeps an enlarged photo of his own first car, a 1952 Chevrolet hardtop, in his office.

“It was a chick magnet from way back,” Vance quipped, adding that he bought the car for $325 and sold it a year later for $475, perhaps planting the first seed for what would become his life’s work.

While some people keep a special spot in their heart for their first car, others prefer a more tangible reminder and keep it in their garage.

Hageness, for one, never has been able to part with his first car since he managed, at age 16, to acquire a version of an automobile he had dreamed of owning since first admiring it in the movie American Graffiti. The vehicle was a 1955 Chevrolet two-door post car just like the one driven by actor Harrison Ford in the 1973

“After watching that movie, I said, ‘someday I’m going to get me a ’55 Chevy,’” said Hageness, 49, of rural Fall Creek. “So when I saw one out behind a barn south of Eleva while deer hunting, I had to have it.”

After towing the car, which had been sitting outside for some time, back to his father’s shop, Hageness wanted to see if it would run. He made sure it had oil and created a gas line by extending a hose to a can of gasoline.

“I turned the key, and by golly the thing started,” he said.

He since has replaced the motor twice and given it two new paint jobs, changing it from the original green to a maroon and white two-tone to red. It clearly is a labor of love for Hageness, who still drives the car fairly often every summer, including in a few car shows, and allowed his daughter Anna to take it to prom two years ago.

Though he has had opportunities to sell the Chevy, Hageness has resisted, in part because of all the people who have told him over the years how much they wish they still had their first car.

“It’s Americana. It’s a connection to the past,” Hageness said. “Generally, when you think about the past, you think of the good times, and it brings a smile to your face.”

After years of regrets about the one that got away, Blakeley couldn’t believe his good fortune when he was driving around town and spotted his first car, looking pretty neglected, with a “For Sale” sign on it 20 years after he’d sold it.

Blakeley bought the car back and restored it to its original two-tone color – tannish gray on the bottom and green on the top.

“It’s a very nice car” and one of a half-dozen he has collected, said Blakeley, who still enjoys going for an occasional spin in the Nash. “I wouldn’t sell it again. It has a good, safe home now.”

A photo album in Parker’s town of Seymour home is a testament to the love affair many Americans have with their cars.

The treasured album is devoted to photos of automobiles Parker, 75, has owned over the past 62 years. It catalogs 51 vehicles, including campers, lawn tractors and boats that have been a part of his fleet.

It begins with a 1940 Studebaker and progresses through the 2008 Audi A4 and 2007 Jeep Grand Cherokee parked in his garage today.

Each page has a story that goes along with it, but none can top the tale of how Parker acquired his first car, in 1948.

Parker’s brother, who worked at Madison Street Auto Body at the time, took ownership of the badly damaged Studebaker four-door sedan after it was rear-ended and the owners decided not to even bother with repairs.

Parker was intrigued by the car but, as a 14-year-old, didn’t have a lot of assets to his name. So he milked his only cash cow – literally.

In exchange for the car, Parker offered to give his brother, a farmer, the cow he had been raising for 4-H and FFA.

The deal was struck – cow power for horsepower – and Parker became a car owner.

“The back end was caved in, and we just left that. It definitely was not a fancy buggy,” Parker said. “It burned oil like mad, and it was a big, old tank, but I didn’t care. To me, it was fantastic. I had a car, and it gave me freedom.”

The unusual transaction marked the starting line for more than just a photo album.

“I’ve been a car buff all my life,” said Parker, who has owned cheap and fancy cars and even dabbled in restoration. “It’s a way of life. It’s just an interesting thing to keep you occupied and busy.”

Though he may have used cash for his first car purchase, Glenn Haukeness of Strum didn’t need too much.

Haukeness paid a mere $5 for a 1919 Ford Model T in 1939. Remarkably, a driver’s license at the time would have set him back more than the car.

However, the 14-year-old avoided that cost because he wasn’t old enough to drive legally but got permission from the guy who enforced the law in Osseo, where Haukeness worked at a gas station.

“The local police officer said if I behaved myself and did not drive after dark it was OK,” said Haukeness, 85.

Jim Paulson, 52, a member of the Indianhead Old Car Club and an organizer of the upcoming 36th annual Indianhead Car Show on Aug. 1 in Chippewa Falls, certainly had one of the most unusual introductions to the world of auto ownership in 1975.

His first car, acquired at age 16, was a Cadillac. But before anyone jumps to conclusions about him living the high life at such a young age, it should be noted that the car was 26 years old and designed for purposes less uplifting than cruising the parking lot at North High School.

The vehicle was a 1949 Cadillac hearse that he recalled refusing to buy unless it came with a casket, which made a marvelous prop at Halloween parties.

As for the car, Paulson said, “I used to drive it to school quite a bit. I think kids just thought, ‘There goes another goofball with a really big car.’”

He still owns his next vehicle, a 1969 Oldsmobile Cutlass convertible, which he considers his first “legitimate” car. The Eau Claire resident said some people have questioned why he has kept that old car along with a few others and spent more money restoring some of them than they’re worth.

“That’s not the point,” Paulson said. “They mean something to me.”

Just after finishing his military service in World War II, Gene Rineck of Wheaton ordered a brand new car for $1,344.

Since new cars were scarce in the postwar era, he had to wait a year before his 1947 Plymouth four-door arrived. But it was worth the wait, coming with such bells and whistles as a heater, radio and outside sun visor. In addition, he recalled fondly, it could go 80 mph and offered a smoother ride than he was used to.

As a student at Eau Claire High School in the 1950s, Fritz Bushendorf knew just what to do after someone crashed into his first car, a blue 1937 Ford 85 he had purchased for $50, and discolored the bumper.

He and a friend planned to show their spirit by painting the vehicle in school colors – white with purple polka dots.

But when their preferred colors were unavailable, they settled on using brushes to apply John Deere yellow and International Harvester red in a unique design created by Bushendorf.

One day he asked a friend if she could make a stencil so he could add his girlfriend’s name to the side of the car. The friend made the stencil but told Bushendorf he’d never follow through.

“Back then you didn’t dare people from my side of town,” said Bushendorf, now 71, noting that for the next year or so he drove the brightly colored car around town with the name “Marilyn” painted on the side.

As for the car, Bushendorf said, “My mother finally made me sell it so she didn’t have to have that red and yellow thing sitting in her yard.”

Like many other senior citizens, George Stanek, 85, of Augusta recalled that motorists in the 1940s often went to great lengths to drive a car.

His first car, a 1936 Chevy he bought in 1943 at age 18, wasn’t in terrible shape except for its bald tires, which were difficult to find replacements for because the nation’s resources were devoted to supporting World War II.

To get around, Stanek said he pealed the rubber off his original tires and replaced it with rubber he cut off another old set of damaged tires. He endured the “not quite balanced” ride for seven months until he finally was able to buy a set of reground tires, which he enjoyed for only two months before selling the car when he joined the military.

Still, Stanek said all the extra effort seemed worth it at the time.

“I was the only one in the neighborhood of that age who had a car,” he said, grinning at the memory of squeezing nine people in the car and hauling them to the local dance hall.

The convertible was a hit with Baumgartner’s friends, as evidenced by an old black-and-white photo of Baumgartner and a friend lying on the hood holding their hands by their heads as if they had antlers. She labeled the photo “nurses dear hunting.”

The fire engine red car also seems like a perfect fit for a woman who six years ago, at age 74, sent Christmas cards adorned with a photo of her at the wheel of her first car. Baumgartner, now of Eau Claire, attached a caption that captures some of the mystique that many Americans associate with the automobile:

“Life’s journey is not to arrive at the grave safely in a well-preserved body, but rather to skid in sideways, totally worn out, shouting, ‘Holy (expletive)! What a ride!’”

One of Europe’s finest classic car collections to be auctioned Sept. 4