Low-resolution representation of copyrighted San Diego Comic-Con International logo used to identify the organization, which is a subject of public interest. No other non-free logo is available. Fair use under United States copyright law.

LOS ANGELES – Trekking to San Diego for Comic-Con is usually just another summertime destination for the likes of “The Walking Dead” mastermind Robert Kirkman. However, this year’s pop-culture bonanza will serve as a major milestone for him: the 10th anniversary of the comic series that spawned a hit TV show and undead phenomenon.

“Bigger is always better,” he said. “I know some people say, ‘Hey! It used to be this quaint little convention where you could buy back issues, but damn it, now Samuel L. Jackson is walking around, and it’s annoying.’ I think Comic-Con casts a huge spotlight on the comic industry. It only seems to get bigger, and I think that’s good for everybody.”

Over the past decade, the fan-driven event has transformed like an Autobot from a comic book celebration into a multimedia pop-culture extravaganza with presentations featuring celebrity appearances, casting announcements and never-before-seen footage from upcoming films and shows. This week’s 44th annual event, which officially kicks off Thursday and runs through Sunday, is shaping up to be no different for famous Comic-Con veterans.

Hugh Jackman is taking his fourth trip to the convention. Last year, he made a surprise appearance with the robot brawler “Real Steel.” Jackman will spend this week in San Diego hyping “The Wolverine,” the upcoming stand-alone “X-Men” spin-off that marks the actor’s sixth time playing the iconic comic character that rocketed him to stardom.

“It’s gold,” said Jackman. “I love being with the fans. I’m excited to show them some stuff at the presentation. It’s gonna be fun.”

“The World’s End” director Edgar Wright is also making a return trip to the San Diego Convention Center to promote his upcoming end-of-the-world bar-crawl adventure with stars Simon Pegg and Nick Frost. He first attended in 2004 for his zombie farce “Shaun of the Dead,” and surprised audiences last year by unveiling test footage for Marvel’s “Ant-Man.”

“It’s definitely nerve-racking,” said Wright. “In the case of showing the ‘Ant-Man’ footage last year, I’m glad I did it. I was the one who was questioning (Marvel studio president) Kevin Feige a little bit. I kept asking him, ‘Are you sure this is a good idea?!’ He was like, ‘Totally! They’re gonna love it.’ I had doubts and was very happily proved wrong.”

Other films expected to be bandied inside the cavernous Hall H include the big-screen adaptations of best-sellers “Ender’s Game” and “Divergent,” and reboots of “Godzilla” and “RoboCop.” It’ll also be a showcase for sophomore outings of “Captain America,” “Thor,” “The Amazing Spider-Man,” “Rise of the Planet of the Apes,” “The Hunger Games” and “How to Train Your Dragon.”

The cast and creators of several TV shows will be on hand to tease upcoming seasons, including returning fan-favorites “The Walking Dead,” “Game of Thrones,” “True Blood” and “Once Upon a Time,” as well as new shows like “The Vampire Diaries” spin-off “The Originals,” android buddy cop drama “Almost Human” and “Marvel’s Agents of S.H.I.E.L.D.”

Alex Kurztman and Roberto Orci, the screenwriters behind movies like “Star Trek” and the upcoming “The Amazing Spider-Man 2,” will be in attendance to debut the first episode of their new Fox series “Sleepy Hollow,” which finds an out-of-time Ichabod Crane battling supernatural forces in modern times.

“It’s important to let people into the process,” said Kurztman. “Fans respond to authenticity. They may not always like the choices that we make, but we didn’t have anything like this growing up. … Comic-Con demystifies the process, but there’s still magic.”

Patton Oswalt opted to record his upcoming Comedy Central special and comedy album in San Diego this week because he said it’s the place where most of his fans will be present. While in town, the geeky actor-comedian is also appearing on a panel for the second season of the cartoony Adult Swim series “The Heart, She Holler.”

On the video game front, Warner Bros. will be showing off the interactive Dark Knight prequel “Batman: Arkham Origins” and Sony is inviting the public to test out the upcoming PlayStation 4 console for the first time. “South Park” creators Trey Parker and Matt Stone will chat about their game, “South Park: The Stick of Truth,” at a panel.

Despite the continued influence of other media, there will still be plenty of actual comics at Comic-Con. Neil Gaiman will discuss returning to his seminal “The Sandman” series, and this year’s convention will mark the 75th anniversary of the Man of Steel with several versions of Superman costumes from film and TV on display on the show floor.

DC Entertainment publishers Dan DiDio and Jim Lee will again face fans’ queries during a panel. This year’s Comic-Con marks the 26th convention for Lee, who will be showing off “Justice League”-themed cars that he designed parked across from the convention center at Petco Park. The super-rides will be auctioned off for charity.

“It’s both an exhausting and re-energizing event,” said Lee. “You do the panels, the press, and you interact with fans. Once you walk out of Comic-Con, you’re completely exhausted because you’ve been going non-stop until three in the morning every night, but you’re also super-excited about the art form and the business.” 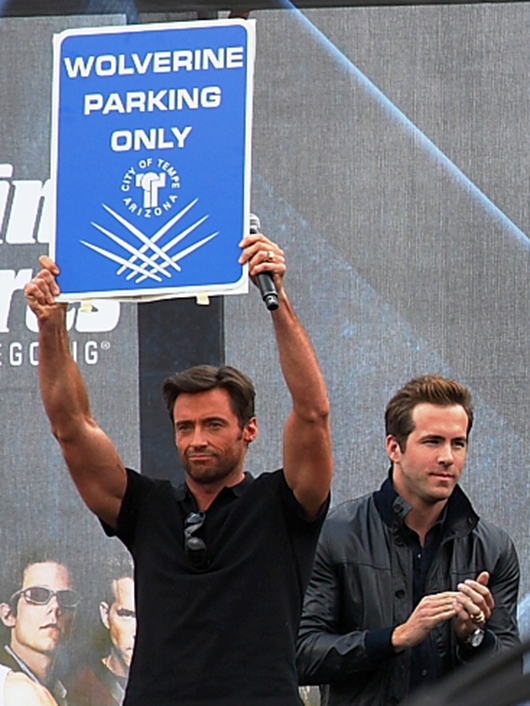 Hugh Jackman, left, is a regular and a fan favorite at Comic-Con from his onscreen role as Wolverine. He is shown here with actor Ryan Reynolds at the April 27, 2009 premiere of ‘X-Men Origins: Wolverine.’ Photo by Grant Brummett, licensed under the Creative Commons Attribution-Share Alike 3.0 Unported license.