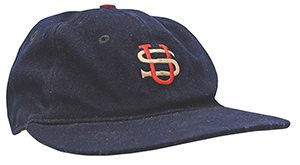 WESTHAMPTON, N.Y. – The VIP hat rack is full at Grey Flannel Auctions’ December 17th Holiday Auction, and you won’t believe whose caps are displayed side by side – none other than New York Yankee immortals Babe Ruth and Joe DiMaggio.

“It’s totally coincidental that two of the rarest and most coveted baseball caps of all time found their way to the same auction, but it’s our good fortune that they did. We’re tremendously proud to be offering these unique items to collectors,” said Richard E. Russek, president of Grey Flannel Auctions.

The game-used Babe Ruth cap, which was sourced from the Ruth family more than 30 years ago, is the only example known to have been worn by the Bambino during his 1934 Tour of Japan, which took place only weeks after his departure from the Yankees. The December 17 Grey Flannel event marks the first time the Ruth cap from the historic Tour of Japan has ever come to auction.

“The 1934 tour made headlines around the world,” said Russek. “Nearly half a million Japanese fans lined the streets of Tokyo to welcome the great former-Yankee ballplayer, who rode through the Ginza district an open-top limousine. He and his teammates stayed in Japan for a month and played 18 exhibition games against Japanese players in 12 cities. That tour was a chapter in baseball history all on its own.”

The cap has “US” embroidered on the front, and inside the sweatband, the name “Babe Ruth” is embroidered in chain stitching. The cap is accompanied by an LOA from the consignor, who was close friends with a prominent person in the Babe Ruth Baseball Little League organization, who in turn had obtained it directly from the Ruth family. The minimum bid on the cap, which will also open the auction as Lot 1, is $50,000.

A circa-1937 rookie-era Yankees cap that was game-used by the great Yankee Clipper, Joe DiMaggio, is entered as Lot 635. The extremely rare navy blue wool cap with NY logo is in beautiful, all-original condition. Embroidered inside the sweatband is “7 J. DiMaggio.” The consignor’s family has owned and treasured the DiMaggio cap since the day the legendary slugger took it off his head and handed it to them. The auction reserve on this item is $25,000.