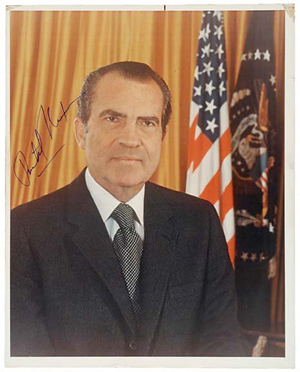 The Decatur man still believes the resigned-in-disgrace 37th president was one of the greatest chief executives we ever had. And while his countrymen may have been ready to impeach the Republican if he had not chosen to fall on his political sword in 1974 in the wake of the Watergate scandal, Hunter says the hung jury of history eventually will come back with a verdict that says Nixon deserves a place in all our hearts.

Waiting for his fellow Americans to get on board and see the Nixonian light may take some time, however. Hunter, who’s made his living as a maintenance man, is busy whiling away the time by continuously adding to his Nixon memorabilia collection, which has items dating back to the 1940s.

Hunter has more than 400 Nixon political buttons, along with T-shirts, envelopes, pennants, bobbleheads, cups, dishes and even whiskey bottles featuring uplifting messages such as “I Love Tricky Dick,” “I’m for Nixon, Experience Counts,” and the rather surprising “He’s Tanned, Rested and Ready,” a slogan aimed at a rehabilitated Nixon in the 1980s, when fans hoped he might undergo a political resurrection.

But Nixon eventually would decide it would be better if America didn’t have him to kick around anymore. The legacy of Watergate, when political operatives bungled a burglary into the Democrat Party headquarters to bug it in 1972 and Nixon tried to hide what he knew and when he knew it, would always prove too much. Hunter, 56, whose first memories of Nixon date to when he lost his opening presidential bid to John F. Kennedy in 1960, said America was ultimately shortchanged by his hero’s untimely political demise.

“We would end up with Jimmy Carter,” Hunter said. “Now, don’t get me wrong, Jimmy Carter is a great man, but he wasn’t a good president; Nixon was better. I still love Nixon, and I think he will go down in history as one of the best.”

As he looks over his Nixon political souvenirs and the gathered reflective fragments of a great and tragic life, Hunter ticks off his icon’s achievements: the historic opening of relations with communist China in 1972 and the Anti-Ballistic Missile Treaty with the former Soviet Union the same year. Nixon also finally put a tourniquet on the bleeding wound of the Vietnam War by ending U.S. involvement in 1973, and he lightened burdens at home by enforcing the desegregation of Southern schools and cleared the air with the establishment of the Environmental Protection Agency.

That isn’t the kind of record that might help much with a tough tea party influenced primary contest these days, but Hunter said Nixon always was his own man.

“He was never afraid to say he disagreed with people,” Hunter said. “He would always be true to his beliefs, and in the end, he would sacrifice everything and resign for the benefit of his country, because he loved his country.”

Hunter said Nixon was plunged into a dark night of the soul after exiting the White House but eventually came back to enjoy a kind of political half-life as a trusted elder statesman until his death in 1994.

What remains today for Hunter is the abiding faith that the world eventually will see Nixon as he does and come to re-evaluate him, while hopefully not driving up the cost of memorabilia too much when it does. Hunter’s patient wife, Diana, who offers a politic smile and states that she prefers not to get involved with her husband’s Nixon devotion, said his presidential collection started small and by chance, when a friend offered him a political button back in the early 1990s.

“And then he got a computer,” she recalls. “And found eBay.” 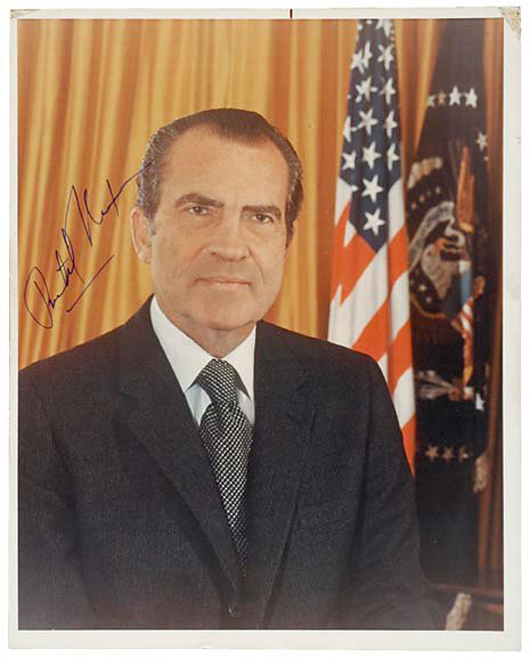 Debora Hunter’s Taos photos to be exhibited at SMU