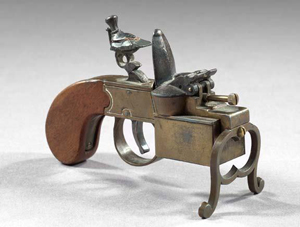 Gun-shape and other novelty cigarette lighters made before 1970, like this Alfred Dunhill tinder pistol example, patented 1897, will not be affected by the pending law in Massachusetts. This lighter sold for $700 plus b.p. at New Orleans Auction Galleries’ Nov. 20, 2005 sale. Image courtesy LiveAuctioneers.com Archive and NOAG.

BOSTON (AP) – Massachusetts has banned cigarette lighters that look like guns, pens, lobster claws and other objects in an effort to cut down on accidental fires started by children.

State Fire Marshal Stephen Coan said the lighters are attractive to children because they look like toys.

The bill was sponsored by state Rep. Geraldo Alicea. The Charlton Democrat tells The Boston Globe he was urged by fire chiefs in his district to raise the issue.

The law takes effect in November, and includes exemptions for collectible lighters made before 1980.

Information from: The Boston Globe, http://www.boston.com/globe

Solidarity banner to be sold at Signature House auction Sept. 4-5