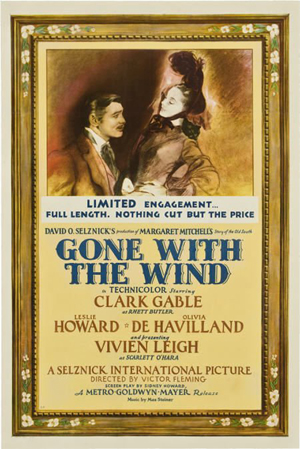 An original 1939 one sheet movie poster for ‘Gone With the Wind.’ Image courtesy LiveAuctioneers.com Archive and Heritage Auctions.

DECATUR, Ga. (AP) – It is among Georgia’s most cherished cinematic heirlooms. But at this moment, it sits, crinkled and waterlogged, on a large table in Leonora Weaver’s studio, a converted garage where the Decatur conservator resurrects damaged works of art.

On this day, Weaver is busy removing, with surgeonlike precision, 30-year-old tape from a 72-year-old king-size Gone With the Wind press book jacket. The press book marked the first anniversary of the Oscar-winning movie.

The item, covered with photos and other details from the 1939 “GWTW” premiere in Atlanta, survived a Feb. 10 fire at a Stockbridge, Ga., storage unit where it had been housed along with several hundred other pieces of Gone With the Wind memorabilia. Water from firefighters’ hoses also caused the backside of the jacket to bleed through, giving the item a slightly pink hue.

Though the fire destroyed the stored belongings of some metro Atlanta families, the Gone With the Wind collection miraculously escaped the worst of it, suffering mostly water damage.

“We’re hoping she can get the water damage and all the stain and mold off,” said Newnan resident Herb Bridges, owner of the collection. The artifacts from the storage unit are estimated to be worth about $200,000 and account for about a third of the entire collection amassed during several decades by Bridges, who is considered the foremost “GWTW” collector.

This is what Weaver, a 53-year-old trained art historian, lives for. Weaver spent 30 years in England and learned restoration before returning to Atlanta to open a studio a decade ago. While Atlanta has a rather impressive number of restorers, Weaver is one of the few people who restore artwork made of paper.

“I’m really enjoying working on it. I really consider it an honor and true privilege,” said Weaver, who has restored original artwork of Currier & Ives and famed watercolor painter John James Audubon.

Weaver’s skills have been called upon to restore everything from Victorian organ pipes to a 2-inch-square etching to a 14-foot map. She has done work at 10 Downing Street, the home of Britain’s prime minister. Weaver’s family, the Okarmas , are well-known in Atlanta’s art circles. Her father, Eugene, founded the renowned Okarma-Jones Gallery in Midtown.

She is, if you will, the artwork whisperer.

Weaver has her work cut out for her on this “GWTW” project, according to Jeannie Barrett Stanca, a fine art appraiser who also is a licensed Georgia insurance agent.

“Leonora is a gem when it comes to restoration. I’ve seen her work. It’s phenomenal,” said Barrett Stanca, owner of J Barrett Studio in Lawrenceville.

However, Barrett Stanca said the value of any damaged “GWTW” artifacts—even with restoration work—is likely to be irrevocably affected.

As soon as Weaver heard about the fire and the uncertain future of the “GWTW” collection, her mind kicked into high gear. She was eager to get to work.

“I knew speed was important,” she said. “When things are soaking wet, you have to act immediately. You have to do first aid and get them to a dry and safe place away from the mold.”

Weaver praised the quick response of the staff at the Clayton County Convention & Visitors Bureau, which runs the Road to Tara Museum in Jonesboro, Ga., keeper of many “GWTW” artifacts. They stripped wet mat boards and backing from the posters, pictures and other memorabilia stored at the unit.

Most of the items are pieces that have been lent to museums and other facilities worldwide. They include posters of an all-female Japanese musical of the famed Margaret Mitchell novel-turned-movie, and numerous posters in different languages showing the famous pose of Rhett and Scarlett clutched in an embrace.

Weaver is part detective, part surgeon, part scientist and even part chef when it calls for whipping up a batch of homemade mending solution to repair tears.

This is not the line of work for those with little patience.

“We never rush anything,” Weaver said in a crisp British accent. The artwork tells me “when it’s jolly good and ready.”

She has a soft, steady stream of baroque music playing throughout the room to calm the heart and steady the hand. After all, “your heartbeat races.”

The work can get so intense that Weaver limits it to the period from 9:30 a.m. to 4 p.m. weekdays. Weaver prefers to work on a few “GWTW” pieces at a time. The oversize book jacket will take about two months.

Items that Weaver works on are photographed and measured and receive condition reports because each piece “has different problems,” Weaver said.

The oversize book jacket, for instance, has three main problems: water, staining and a severely damaged spine from years of bending.

Using a small hot iron to lift the tape from the paper jacket, Weaver inches her way along with the help of a scalpel to lift tiny flecks of the tape. Once the tape is removed, the piece then will go into a solution bath to remove acid. It then dries a week before repair work on the torn parts begins, using Japanese tissue paper, which is thin yet remarkably strong.

Once that’s done, the piece is flattened and returned to a presentable shape, at which point Weaver consults with the client on the long-term prospects for the artwork. Framing? Storage? Traveling exhibition? Museum?

At some point, Weaver will start on the biggest challenge of the “GWTW” restoration: two pieces of artwork stuck together. One will likely be lost to save the other. Weaver has no idea what’s underneath.

But Bridges will probably make the call on the fate of the piece. Until then, Bridges has chosen to leave Weaver to her work.

“In her studio, I sort of let her alone,” Bridges said. “There’s no rush. We don’t have a big exhibit schedule. Therefore, she can take her time and get it done right and proper.”

Information from: The Atlanta Journal-Constitution, http://www.ajc.com 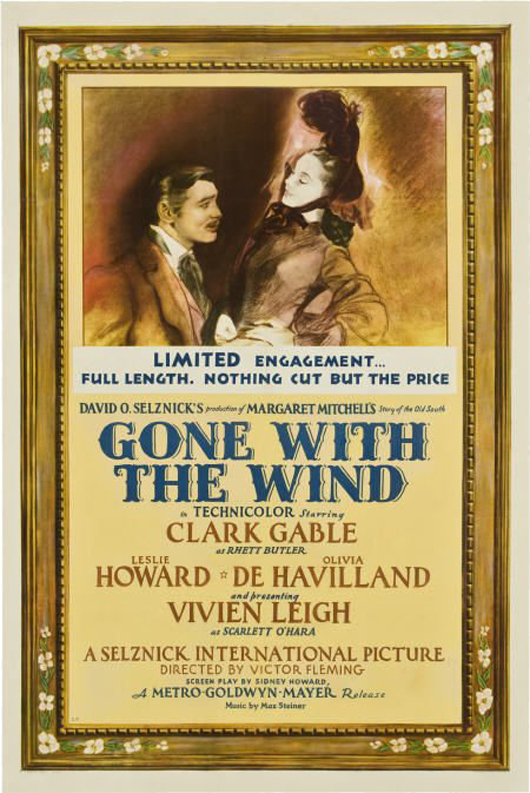 An original 1939 one sheet movie poster for ‘Gone With the Wind.’ Image courtesy LiveAuctioneers.com Archive and Heritage Auctions.