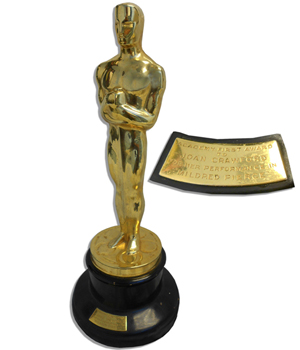 The ‘Best Actress’ Oscar awarded to Joan Crawford for her lead role in the 1945 film ‘Mildred Pierce’ was auctioned for $426,732 at Nate D. Sanders’ Sept. 25 auction in Los Angeles. Image courtesy of Nate D. Sanders.

LOS ANGELES (ACNI and AFP) – Nate D. Sanders, a Los Angeles-based auctioneer and expert authenticator of autographs and celebrity memorabilia, hit a career milestone on Sept. 25th. His company auctioned the “Best Actress” Oscar won by Joan Crawford for her role in the classic film noir Mildred Pierce for an astounding $426,732. The price includes a 20% buyer’s premium.

“There were many bidders vying for the Oscar. It sold to a private collector,” Sanders told Auction Central News.

The selling price is especially remarkable when compared to the previous price realized at auction. In 1993, Christie’s East offered the Crawford Oscar in one of its sales with an estimate of $8,000-$12,000. It surprised even Christie’s then-Director of Collectibles Joshua Arfer when it knocked down $60,000. “I didn’t expect it to go that high,” Arfer remarked at the time.

Crawford, who died in 1977, won the award in 1945 for her portrayal of a middle-class housewife struggling during the Great Depression, beating out the frontrunner, Ingrid Bergman.

Crawford thought she wouldn’t win the Oscar, so she didn’t attend the Academy Awards ceremony, pretending to be ill. The coveted statuette was accepted on her behalf by her director, Michael Curtiz.

Later, Crawford invited reporters to her hotel bedroom to receive it herself, famously saying: “Whether the Academy voters were giving the Oscar to me, sentimentally, for Mildred, or for 200 years of effort, the hell with it – I deserved it.”

“This Oscar carries with it a fascinating story and represents Joan Crawford’s gutsy comeback in the industry that labeled her ‘box-office poison’ several years earlier,” said Sanders. “It’s really one of the most spectacular Oscars in existence.”

Sanders said the market for celebrity memorabilia – which he likens to a microeconomy that answers only to itself – is “super hot” at the moment. “As the economy falters, collectible memorabilia and movie awards are spiking dramatically,” he said. “Don’t forget, during the Great Depression, fine art was selling as people were starving and in breadlines.”

While most of Sanders’ regular buyers are in the USA, he said interest is strong in other countries, as well.

“There are many collectors in the Middle East, the South Pacific – all over the place. We try to have a mixture of items in our auctions to appeal to all of our clientele,” Sanders said.

Based on auction results and his own observations, Sanders said the current top three celebrity icons in terms of collectibility are Marilyn Monroe, Babe Ruth and James Dean, in that order. Elvis and Star Wars are right up there, as well.

“With Marilyn memorabilia, her most famous dresses are the items of greatest value,” said Sanders. “A dress from an iconic movie scene could sell for up to $5 million. A dress she wore in a film before she was an established star might be worth half as much.”

Sanders places Bob Dylan and Paul McCartney at top of the list of “most collectible” currently active entertainers. In particular, Dylan is known for keeping a low profile and not signing many autographs, which adds to the marketability of Dylan-signed goods but also makes authentication critical. This is where Sanders holds a trump card, since he’s a trusted expert in the field of celebrity autographs and can separate the real from the unreal.

“I’ve been doing this since I was a kid, and I’ve had more than 10 years’ experience in seeing and handling celebrity contracts. I’ve become very good with authentication,” he said.

Oscar statuettes will continue to be on Sanders’ most-wanted list, he said. Less than a year ago, he auctioned Orson Welles’ Citizen Kane Oscar for $860,000. Add to that the recent triumph with the Crawford Oscar, and it seems clear that there are plenty of deep-pocketed collectors following Sanders’ sales who will shell out the big bucks to own one of Hollywood’s ultimate status symbols.

Oscar’s appearance at auction has not been without its controversy, however. The Academy of Motion Picture Arts and Sciences, which organizes Hollywood’s top awards show, has criticized sales of Oscar statuettes in the past, contending that they should be won, not bought.

An Academy spokeswoman did not immediately respond to request for comment. 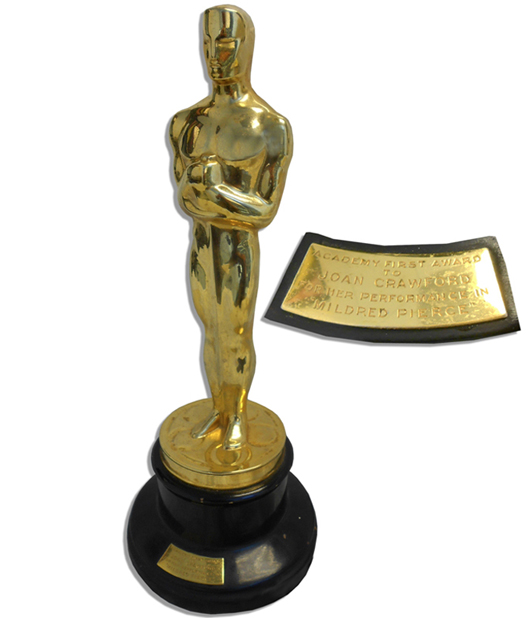 The ‘Best Actress’ Oscar awarded to Joan Crawford for her lead role in the 1945 film ‘Mildred Pierce’ was auctioned for $426,732 at Nate D. Sanders’ Sept. 25 auction in Los Angeles. Image courtesy of Nate D. Sanders.