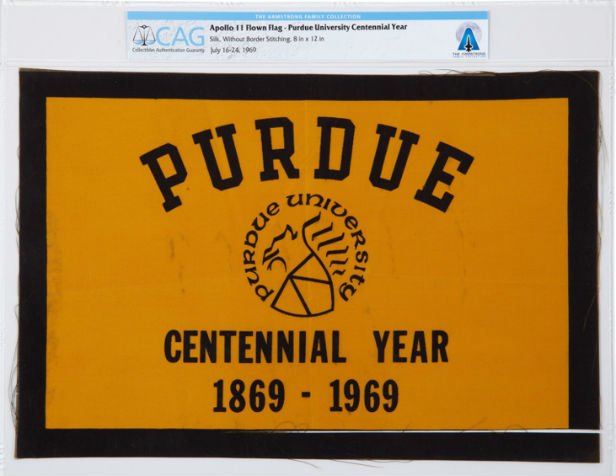 Purdue University has produced 23 astronauts including Neil Armstrong, who took this flag on the Apollo 11 mission. Image courtesy of Heritage Auctions

WEST LAFAYETTE, Ind. (AP) – Orlando Itin has been here before – as recently as last spring, actually – thumbing through an auction catalog, spotting a priceless piece of Purdue University memorabilia and knowing one thing.

“There has to be a way to get that thing back where it belongs,” said Itin, owner of Bruno’s Swiss Inn, where a generous slice of his Purdue-related collection hangs in the foyer and dining section of the West Lafayette restaurant, just down the State Street hill from campus.

In May, that meant recruiting Drew Brees, former Purdue standout and New Orleans Saints quarterback, to do the heavy lifting once bidding got too rich for Itin’s blood on what was believed to be a 1930s Purdue jersey worn by John Wooden, an All-American for the Boilermakers who went on to be a coaching legend with UCLA.

Now, opening bids are about three weeks away at Heritage Auctions, the same house that managed the Wooden jersey, for more than 2,000 items from the family collection of astronaut Neil Armstrong, Purdue graduate and first man on the moon.

Among the finds in the collection: A silk flag, measuring 12-by-8-inches, bearing the inscription, “Purdue Centennial Year, 1869-1969.” The banner’s distinction, according to Heritage Auctions: It went with Armstrong on the Apollo 11 mission to the moon in July 1969.

“I know we’re not looking at Wooden (jersey) dollars,” Itin said. “But it’s still Purdue. I’m thinking, hey, we got the Wooden jersey. How about this?”

On the fourth floor of Purdue’s HSSE Library, where 400 boxes of cataloged documents, artifacts and correspondence saved through the years by Armstrong reside in the Virginia Kelly Karnes Research Center, archivists have their eyes on the auction and the flag, too. They’re all for a donor ready and willing to pick up pieces of Armstrong’s possessions and allow the university to keep them safe and available for researchers.

But Sammie Morris, director of the Karnes Archives, said she wants to be up front about the banner listed in an auction scheduled to end Nov. 2: Purdue has one Armstrong gave to President Fred Hovde in 1970 during a ceremony in what is now Mackey Arena.

“It’s in a frame that (Armstrong) built, and it’s very nice,” Morris said. “We’d love to have the one in the auction.”

“Or one of the other items – anything that helps us complete and preserve the story of Neil Armstrong,” said Tracy Grimm, the Barron Hilton Archivist for Flight and Space Exploration at Purdue.

“But we’d want people to go into this knowing what we have in the collection,” Morris said.

Bidding starts Oct. 12 on the first of three auctions scheduled through November 2019 in what’s billed as “The Armstrong Family Collection.” (That’s the same day, coincidentally, as the release of First Man the Armstrong bio-pic starring Ryan Gosling.)

Heritage Auctions, based in Dallas, timed the auction around the 50th anniversary of the first moon landing. The items in the first auction include pieces of a wing and propeller from the 1903 Wright Brothers flight, NASA medallions, assorted flags and correspondence that Armstrong took with him to the moon. The collection also includes, as his son, Mark Armstrong put it in a Heritage Auctions description, “items that make you scratch your head.”

That squares with what Carol Armstrong, Neil Armstrong’s wife, said at a private event at Purdue in November 2014, when the university dedicated his collection of correspondence – valued at more than $3 million – at the Karnes Archives. There was so much that it took a team of Purdue archivists two years to catalog it all after Armstrong’s death in 2012.

A search of the Heritage Auctions listings turns a page of items with Purdue connections: a blazer patch from his fraternity, Phi Delta Theta; an autographed poster from a Purdue astronaut alumni reunion; and a handwritten notebook for general engineering classes he took before graduating in 1955.

The Purdue Centennial flag, in school colors of black on old gold, has “light soiling” and “separation at the lower black border,” according to the Heritage Auctions listing.

Michael Riley, director of space exploration auctions for Heritage, said the auction site has valued the banner at $80,000 and will list it with a starting bid of $40,000.

The Heritage Auction listing offers a nudge reminiscent of the push for the Wooden jersey: “We feel it would be a noble act by a Boilermaker graduate (or fan) to purchase this flag in time for the university’s sesquicentennial in 2019, and either donate it to Purdue or allow them to display it.”

Morris said Purdue knew about the Armstrong collection soon after Heritage announced the auction series on July 20, the 49th anniversary of the moon landing.

Morris said the archives generally doesn’t have the funds to go after collectibles. She said the archives staff has reached out to the development offices across the university to see whether there were engineering or other alumni who might be interested in buying pieces and donating them to Purdue’s collection of Armstrong materials.

Purdue’s collection has some artifacts, including the slide rule Armstrong used at Purdue, some of his model aircraft and some of his Boy Scout gear. The university also has maps, manuals, food samples and an ascent checklist that went into space with Armstrong on Gemini and Apollo missions.

Armstrong brought the framed banner, tucked in a canvas bag, as a surprise for President Hovde on a day when Purdue gave the astronaut an honorary doctorate in engineering.

In a typed version of his speech from Jan. 9, 1970, part of the collection on the Karnes shelves, Armstrong addressed a crowd of 10,000 at the Purdue Basketball Arena about what an honor it was to receive the honorary doctorate, “particularly considerate of you to make me feel so much at home by conducting the presentation in this arena on the Rocket Pad.” (Rick Mount, an All-American nicknamed the Rocket, was a senior that season at Purdue.) At the end of the four-page speech, Armstrong typed: “Add presentation of flag.”

That day, according to university photos and an account in the Journal & Courier, Hovde held up the gift from Armstrong for the crowd to see and told him: “We will treasure it and guard it.”

Morris said the framed banner was on a wall in a university office before coming to the Karnes Archives in the past 15 years. Grimm said the flag will be part of an Armstrong exhibit scheduled to open in March 2019.

Riley said Armstrong had two Purdue Centennial banners, giving one to the university and keeping the other one. He said the family’s collection included a 5-by-7-inch photo album Purdue made for Armstrong from the day he received the honorary doctorate. (“Whoever buys the flag should probably buy the photo album, too,” Riley said.)

Riley was still going through the collection recently with Mark Armstrong to add photos and descriptions of items. He said that the First Man hype was just one reason to expect a crush of interest in the series of auctions.

“The first round is just impossible to predict because none of his material has been on the market before,” Riley said. “So, we feel it’s going to be multi-million dollars for just the first one, but we really don’t have a great idea for what it could be. I mean, the response has been incredible. We’re getting people from all over the world wanting catalogs and to come in.”

Which was one reason Itin, weeks away from the start of the auction, was putting out feelers to find benefactors willing to do with Armstrong’s Purdue flag what Brees did with Wooden’s jersey.

“Some things belong at Purdue,” Itin said. “They just do. I’m spreading that word now.”

Information from: Journal and Courier, http://www.jconline.com