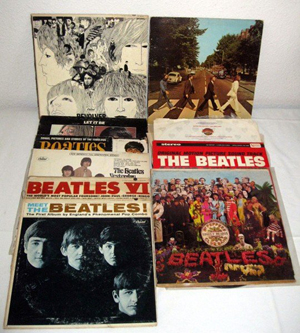 Collection of vintage Beatles albums. Image courtesy of LiveAuctioneers.com Archive and Specialists of the South Inc.

DES MOINES, Iowa (AP) – When Nate Niceswanger opened ZZZ Records in 2000, he figured baby boomers would be his vinyl store’s target demographic. An entire generation whose moms had tossed out their vinyl, baseball cards and comic books would come in and start their new collection from scratch.

Instead, The Des Moines Register reports he has found a generation of young music fans who are embracing their parents’ old vinyl alongside digital music. Today, collecting vinyl combines old-school cool, while offering the convenience of MP3 downloads in most newer record releases.

“It seems like there’s a new audience,” said Niceswanger, whose store is among those around the country participating in Record Store Day today.

According to Nielsen SoundScan and Billboard, sales on nondigital physical music were down 12.8 percent in 2012. Vinyl is the lone bright spot in that group—sales rose 17.7 percent, its fifth straight year of growth. And 67 percent of vinyl purchases are made at independently owned music stores.

When Niceswanger opened ZZZ, no other local shops focused on vinyl. Now Des Moines has five shops with a vinyl focus, and Jay’s CD & Hobby on the south side also has a section for new and used records.

The Highland Park neighborhood around Euclid and Sixth avenues has become a miniature vinyl district for the city. There are four shops within walking distance of each other: Red Rooster Records, 509 Euclid Ave., Wayback Records, 3524 Sixth Ave., The Underground Rock Shop, 617 Euclid Ave. and Uncle Moe’s Records, 516 Euclid Ave., which opened earlier this month.

“It’s great, because it makes it a destination for collectors,” said Steve Radcliff, who owns the Underground Rock Shop. “People can walk around and check us all out.”

Increasingly, vinyl is a go-to option for Iowa bands. It’s more expensive to produce than a CD, but fans are often more willing to shell out extra money for the larger art, especially when the album includes a digital download code inside. CDs have become just a delivery system for MP3s, while LPs can be a memento of a favorite show.

Poison Control Center guitarist Patrick Fleming said the band’s double LP Sad Sour Future offers the best profit margin at its merchandise table at shows. The central Iowa band makes $6 off each CD, but $8 off the vinyl version of the album.

“The only thing bands could possibly make more money on than vinyl is digital download cards, because they cost you pretty much nothing to produce,” Fleming said. “But for a touring band it’s pretty hard to sell those cards, so vinyl is the preferable format to sell music on tour.”

The Iowa label Maximum Ames Records was founded in 2011 by a collective of musicians who wanted to release albums on vinyl. Label co-founder Chris Ford (of the band Christopher the Conquered) said the cost of physically making vinyl is much higher than CDs (around $7.50 per record compared to $1.10 for a CD). But for fans of an artist, vinyl represents something more.

“The higher profile physical item with the beautiful art implies a higher value,” Ford said. “It’s sort of resistance to everything being compartmentalized on a hard drive. Vinyl feels like something people can pass on to their kids.”

Collector Daniel Bosman, 31, hasn’t missed a Record Store Day. He started a vinyl collection about a decade ago, not long after getting his first iPod.

“As I got more into digital, I also got more into records,” Bosman said. “Then I got my mom and dad’s collection, then my grandma and grandpa’s and before you know it I had a couple thousand records and am a collector.”

Bosman has five record players around the house, but still uses an iPod for listening in the car. He said he’s lost some of the excitement for Record Store Day this year, because while the day once focused on independent stores and labels, more and more big labels have gotten involved and prices have risen as a result.

“Major labels are putting out vinyl for $35-$40 a disc, while the indie acts have kept things around $16-$20,” Bosman said. “Once it gets up to $35, it feels like you’re taking advantage of the fans a bit. That’s what drove people to download in the first place.”

Doug Harmer, 30, started collecting vinyl while growing up in the ’90s. He would read about a hip-hop act sampling an older obscure song and dig through bargain bins of vinyl to find things. Over the last decade he’s worked at record stores specializing in vinyl in Baltimore, Chicago, and most recently Half Price Books in West Des Moines.

“When the first CDs were coming out, they kind of had a hollow, tinny sound,” Harmer aid. “But vinyl definitely had a different type of warmth. You get addicted to the way they sound.”

Harmer said you can get a different feel from every record store you visit, with each store having its own bin of oddities and specialty discs. Harmer also notices different feels for stores in different cities. He said there was more focus on jazz in Chicago, while he’s more likely to find a unique Pink Floyd bootleg in Des Moines.

“It makes you wonder how records get where they are, and how people find them,” Harmer said.

Niceswanger sees a definite trend toward vinyl, especially over the last five years. When he opened, CD sales remained strong. Early on, he would order four to five copies of each CD. Now he’s deciding whether to order zero or one. And that one is not always a sure bet.

“When I started, everyone thought I was nuts. It didn’t seem like the right format to be focusing on in the year 2000,” Niceswanger said. “Now we’ve gotten to the point where CD stores have fizzled out. The common denominator seems to be that stores that focus on vinyl are the ones surviving.” 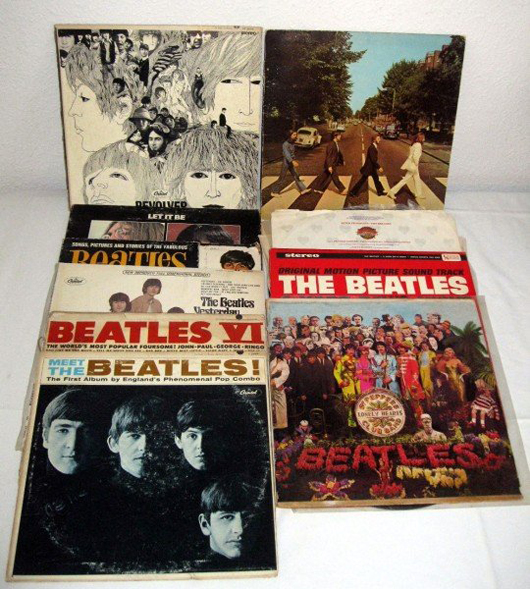 Collection of vintage Beatles albums. Image courtesy of LiveAuctioneers.com Archive and Specialists of the South Inc.

Music lovers get their groove back at Little Big Store in Miss.