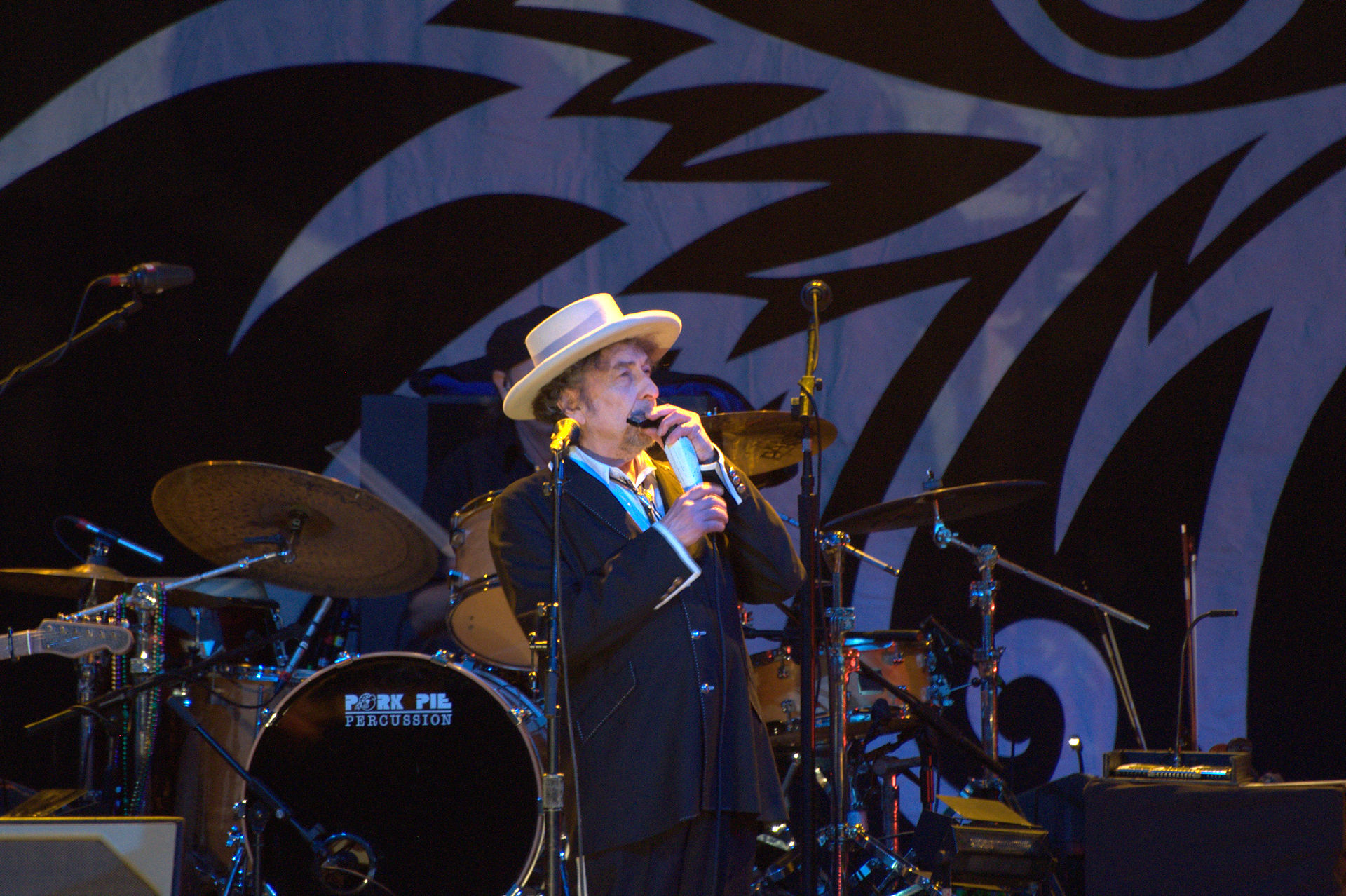 PROVIDENCE, R.I. (AP) – On the night of July 25, 1965, Bob Dylan strode onto a stage at the Newport Folk Festival, plugged in an electric guitar and gave the music world a shock.

Wearing a black leather jacket, the darling of the folk movement and singer of protest songs launched into a searing, distortion-filled, three-song electric set that brought boos from folk purists but thrilled others.

Fifty years later, it’s considered one of the most important events in rock history, the high-voltage moment when Dylan broke away from folk and helped show fellow musicians the poetic possibilities of rock.

The Fender Stratocaster that Dylan played that night sold for nearly $1 million, the highest price ever paid for a guitar at auction. A new book out this month, Dylan Goes Electric! Newport, Seeger, Dylan, and the Night that Split the Sixties, by Elijah Wald, takes a deep look at the event. And the three-day festival, which starts Friday, is marking the anniversary with a closing-night tribute to be performed by a still-secret lineup of artists.

Musicians today still take inspiration from Dylan’s performance and talk about what it means.

“It’s the true American spirit to rebel against the establishment,” says Joey Burns of the indie rock band Calexico, which is performing at the festival on Friday. He calls it a “moment of turning things upside down and questioning and rebelling and being true to oneself. Dylan being true to oneself as an artist. And also reinventing oneself.”

Peter Yarrow of the folk trio Peter, Paul and Mary, who introduced Dylan that night, agrees Dylan was a poet pursuing his artistic vision. But he says Dylan’s going electric had a different meaning back then for those in the folk world, which was deeply concerned with social causes such as civil rights. Until then, they thought Dylan, who wrote Blowin’ in the Wind, and  A Hard Rain’s A-Gonna Fall, was, too.

“The audience cared so much about his music and its meaning in the world of that time,” Yarrow says. “To them it was a breach of faith.” Listeners wondered whether Dylan had become a sellout, he says, someone who had decided to “go commercial and let the suits determine what you’re going to sound like.”

Dylan’s performance was not the first time someone had played an electric guitar at the festival. And many in the audience had already heard one of the electric songs he played that night, Like a Rolling Stone, which had been released the previous week and was on the radio. But this was a poke in the eye from Dylan, who had played twice before at Newport, in 1963 and 1964.

Yarrow says Dylan was insulted by his position in the lineup: in the middle of the evening, rather than at the end, like a traditional headliner.

Before his set, Dylan told Yarrow he planned to play three songs and would not sing acoustic. Yarrow suggested he begin with a couple of acoustic songs, then tell the crowd he had something new he was working on that he wanted to share. Dylan ignored him.
Yarrow recalls he did a scrupulous sound check before Dylan played. But as Wald points out, rock ‘n’ roll at an outdoor festival was a novel concept at the time.

Dylan took the stage and launched into a howling version of Maggie’s Farm. Guitarist Mike Bloomfield turned his instrument up as loud as it could go. The now-familiar sound of distortion was new back then.

“The sheer volume, no one had ever heard anything that loud,” Wald says. “A lot of people just thought it sounded horrible. The band was overwhelming Dylan. The people who loved it were as shocked by it as the people who hated it.”

In addition, the band was under-rehearsed. Some members had learned the songs just a few hours before, Wald says. They followed with Like a Rolling Stone and a third song that they struggled through.

Legend has it that festival organizer and folk music elder statesman Pete Seeger threatened to take an ax to the power cord, though Wald says those stories probably stem from Yarrow telling the crowd Dylan was going to get his “ax,” slang for guitar.

While some who booed were upset over Dylan’s embrace of rock or the lousy sound, others did so because Dylan’s set was so short and they wanted to hear more.

In any case, Yarrow took the stage again and coaxed Dylan back up for two more songs, both acoustic – It’s All Over Now, Baby Blue and Mr. Tambourine Man – before he left for good.

“He was aghast by the response and said to me, and this is a quote, ‘What have you done to me?’” Yarrow recalls.

Dylan’s publicist did not return an email seeking comment for this story.

But in the 2005 Martin Scorsese documentary No Direction Home, Dylan said that at the time, he didn’t know why people booed, but that he didn’t think it had to do with the songs themselves. He said that later he heard Seeger was upset.

“It didn’t make sense to me, Pete Seeger, someone whose music I cherish, someone who I highly respect, is going to cut the cable,” Dylan said. “It was like a dagger. … Just the thought of it, you know, made me go out and get drunk.”

Boos continued in the months that followed, with one fan even shouting “Judas!” at a show in England.

Dylan returned to play at the festival only once, in 2002. Festival organizers say there is a standing invitation for him to play whenever he wants, but he will not be coming this year.

These days, the story is often told as a generational split, a case of a 24-year-old Dylan rebelling against straight-laced older folks, but Yarrow and Wald say there was more to it than that.

At this year’s festival, “if Katy Perry was invited, a lot of people would go, ‘Oh, my god, no.’ That’s the same split that was going on then,” Wald says. “It wasn’t that people hated electric guitars. It’s that they hated stupid pop music.”