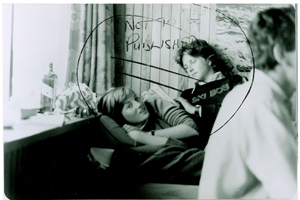 The photo of a teenage Diana Spencer lounging with a young man was deemed inappropriate by a British newspaper. Image courtesy RR Auction.

WASHINGTON (AFP) – A previously unseen press photo of a teenaged Princess Diana that a London tabloid deemed too hot to publish has sold for $18,306, the American auctioneers handling the sale said Friday.

The black-and-white image from the dawn of the 1980s shows Diana, possibly

in a ski chalet, smiling at the camera as she lies comfortably in the lap of a like-aged but unidentified young man reading a book. The photo was taken before she became princess of Wales.

By the window stands a bottle of Johnnie Walker whisky, but more intriguing are the words “not to be published” scrawled across the photo with the kind of grease pencil used by newspaper picture editors at the time.

On the back, the photo is dated Feb. 26, 1981 – two days after Buckingham Palace announced the engagement of Prince Charles and the commoner then known as Diana Spencer.

RR Auctions of Amherst, N.H., which handled the sale, said the photo came from the private Caren Archive, which acquired it seven years ago when it bought out the photo library of Britain’s Daily Mirror newspaper.

The auctioneers did not identify the buyer.

Internet bidding on the photo and others – including a rare autographed portrait of Albert Einstein by a New York society photographer – ran fromJan. 17 through Thursday.

Diana died in a Paris car crash in August 1997, a year after her divorce from Charles. She was 36. 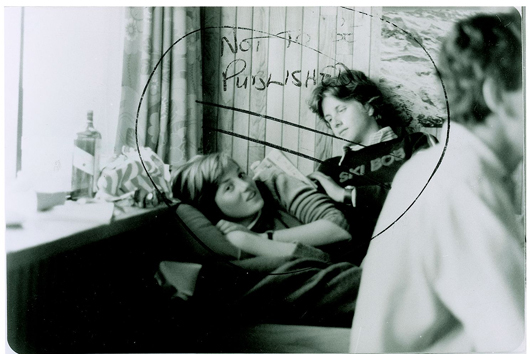 The photo of a teenage Diana Spencer lounging with a young man was deemed inappropriate by a British newspaper. Image courtesy RR Auction.