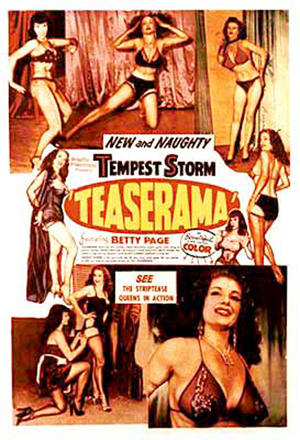 Photographer and filmmaker Irving Klaw (1910-1966) ran the business known as Movie Star News and gained the nickname ‘Pin-up King.’ This poster promotes one of his films, ‘Teaserama,’ which starred exotic dancer Tempest Storm and a young Bettie Page. Fair use of low-resolution image under the guidelines of United States copyright law.

NEW YORK (AP) – Movie Star News amassed a staggering amount of film stills, posters and negatives over the past 73 years — nearly 3 million, including 1,500 prints of Bettie Page, known as the queen of pin-ups. But last week, the once-lively store in lower Manhattan was lifeless. The classic movie posters that once covered its narrow 2,000-square-foot space were rolled up or covered in cellophane, its bins and racks empty. Everything was packed up in cardboard boxes that lined the floor.

The legendary Manhattan store credited with creating pin-up art had sold its entire inventory to a Las Vegas collectibles company.

The collection, regarded as one of the largest of its kind, is headed for the auction block. It will be sold in a series of sales slated to begin next year. The bulk of the collection covers the years 1939 to 1979; 11,500 movies and 5,000 actors are represented.

“This is the most important photo archive of Hollywood in existence. There are tens of thousands of negatives that have never been reproduced,” said Stuart Scheinman, co-owner of Entertainment Collectibles, which bought the collection. “There are images here that have never been seen by the public.”

There are 2,000 original prints and negatives of Frank Sinatra and Marlon Brando, 1,000 of Gary Cooper, 400 of Bette Davis, hundreds of movie images of “The Godfather” and “Gone With the Wind.”

“This could literally take five to 10 years to go through it all,” Scheinman said. He would only say the company purchased the collection for “seven figures.” Its true value was anyone’s guess, but he believed it easily was worth $150 million.

Movie Star News produced 8-by-10 glossy prints from the negatives, selling each for a few dollars in the store and through the mail. But the Internet has significantly cut down on demand.

“I make references to things when customers come in, and they have no idea what I’m talking about,” said Ira Kramer, who took over the business that his mother, Paula, and uncle Irving Klaw, started in 1939. “Today, if you want a picture of a star you can go on the computer and download it. So what do you need me for?”

“The maintenance of the collection has been fastidious … the way a fine library would maintain material,” said Arlan Ettinger, president of Guernsey’s and in charge of selling the collection.

As far back as the 1940s, Movie Star News had a mailing list of 100,000 names. World War II soldiers were big customers, buying prints for their lockers, Kramer said.

The entrepreneurial Klaw, who died in 1966, hit on the idea of selling pictures of Hollywood stars while operating a movie bookstore.

“He noticed that kids were tearing out the pictures of the movie stars, so he decided to sell their pictures rather than the books,” Kramer said. Klaw started dealing directly with movie studios, RKO, Columbia and others, located in those days along Eleventh Avenue.

“He made arrangements to buy from them whatever they didn’t want … original negatives, original prints of ‘Citizen Kane,’ ‘Three Stooges,'” he said. The studios were more than happy to be rid of the stuff for which they had no room.

Kramer’s mother was the one who took the pin-up shots. But it was Klaw who launched that side of the business after a man approached him about making him a set of photographs of skimpily-clad girls posing with whips and ropes, said Kramer.

Page was Klaw’s favorite model, and a suitcase of the 7-inch heels she wore in the photos, plus other bondage props, will be included in the auction.

The photos were tame by today’s standards. In fact, the models were required to wear two pairs of underwear. But the FBI continuously harassed Klaw and he had to appear before the 1955 Senate Subcommittee on Obscene and Pornographic Materials.

“It was a big headache,” Kramer said. Klaw finally decided to burn all the pin-up material — but Paula Klaw saved a lot of it.