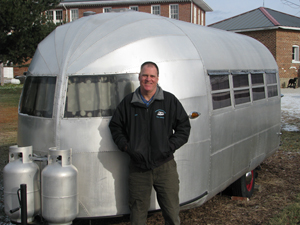 PERU, Ind. (AP) – Dan Piper says he has an incurable disease. He calls it “silver fever.”

He first caught the bug in his late 20s, when he purchased a small, beat-up 1960s Shasta trailer for around $200. He patched up the leaky roof, made some other repairs and started camping in it.

After that, Piper said the silver-fever obsession took its full affect.

“At the time, I thought I was the only old-trailer nut out there,” he told the Kokomo Tribune. “I thought there was something wrong with me. I was crazy. But once I started looking on the Internet, I realized there’s a lot of us trailer nuts out there.”

That realization led Piper to found Vintage Campers – a 16-year-old business just south of Peru that buys, sells, restores and repairs old campers for vintage aficionados all across the country, and even all over the world.

Piper said his business deals almost exclusively in 1960s-or-older campers, like the iconic Airstream, and the dealership is really the only one of its kind anywhere in the Midwest. You’d have to travel to New York or California to find something similar, he said. They do full restoration work on old campers, sell a slew of original parts, and have shipped vintage trailers to places as far away as France, Germany and Japan.

“It’s a very niche market, and without the Internet we wouldn’t exist,” he said, noting about 90 percent of his business is done online. “But through it, we can reach the world. … It’s amazing. It’s crazy.”

In fact, Vintage Campers is such a rarity that it recently caught the attention of cable station HGTV, who spent a day last year filming his collection for an upcoming TV show on vintage campers and the unique subculture that surrounds them.

It’s not the first time the business has attracted media attention. Ten years ago, Piper said he sold two trailers to a film company to use in the 2003 movie Big Fish, starring actors Danny DeVito and Ewan McGregor. He also rents them out to companies who want to use antique campers in TV commercials.

But you probably wouldn’t guess at Vintage Campers’ national acclaim just by driving by it.

Piper runs his business out of the old Miami County Home, 2574 S. Strawtown Pike, that once houses the county’s poor and destitute. Now the rooms inside the mansion-size building are packed with old toilets, handles, sinks, doors, windows and piles of small, obscure vintage camper parts.

Outside in a large open field, rows upon rows of metallic trailers glint in the sun. Other trailers are packed with various supplies for the business.

Although Piper said there’s always been a market for antique trailers, he said it’s really picked up in the last few years as retro-themed 1950s stuff has become more mainstream. Just last year, he said he’s noticed vintage trailers in commercials for McDonald’s and Progressive Insurance.

Now, after eight years as a full-time dealership, Piper said they sell about 25 units a year and ship out around five packages of vintage trailer parts every day. They’re currently working on restoring a 1960s camper a man shipped to them from West Virginia. He said they’ve received so many repair orders that they’re about six months behind.

But when it comes to actual customers stopping by in Peru, Piper said during a good week they’ll only see three or four people.

It may be pointless to question why Piper loves vintage trailers so much. After all, who can know the reasons of the heart?

But Piper said he does have his reasons.

“The stuff that they build now, they slap it together pretty quick,” he said. “They’re more concerned about quantity than quality. I deal in … riveted-constructed trailers. So they’re not just old – they’re the old ones that are built like airplanes. They’re so much more durable.”

“They’re just a cool-looking rig, whether you’re driving down the highway or pulling into a campground,” he said.

Although Piper obviously aims to make a living dealing in vintage campers, he said at his core he’s not a businessman – he’s a collector. In the lot outside the house sit 15 trailers – ranging from a long, slender 1947 Curtis Wright Model 5 to a boxy 1964 Liberty – that make up Piper’s personal collection. He said these aren’t for sale, just his personal enjoyment.

“I love to go out and find the trailers,” he said. “That’s the fun part of the business. Restoring and working on them – that feels too much like work to me.” 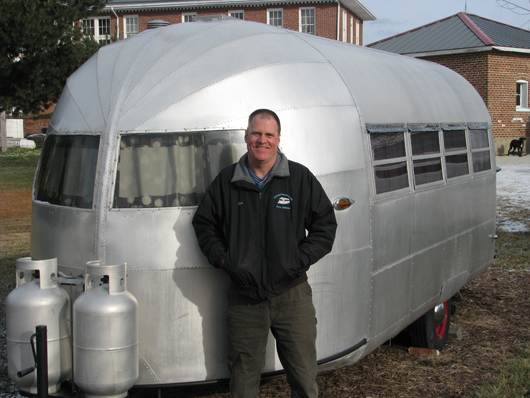 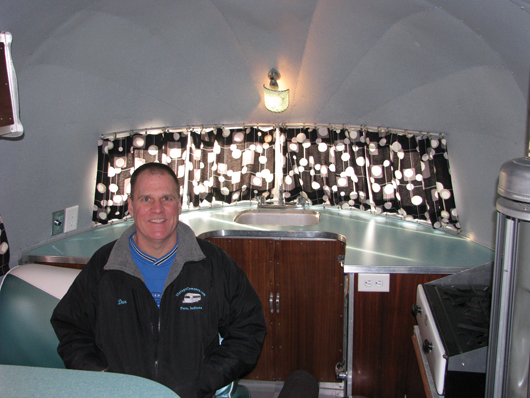 Piper relaxes in his favorite camper, the 1947 22-foot-long Curtis Wright, his back to the kitchen sink. Image submitted.