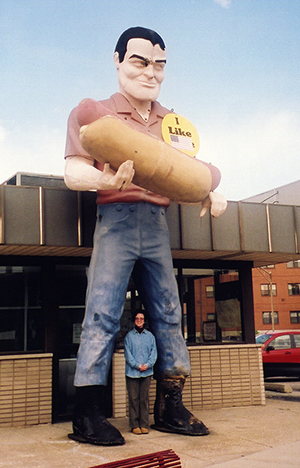 A giant Muffler Man holding a hotdog outside Bunyon’s in Cicero, Ill. Image by Mykl Roventine. This file is licensed under the Creative Commons Attribution 2.0 Generic license.

HUTCHINSON, Kan. (AP) – A love for roadside attractions helped Greg Holmes get a big head—and he’s proud of it.

It takes two arms stretched wide to carry and is taller than the 5-foot-6 Holmes when he’s kneeling.

Holmes first saw the decapitated head at an antique show in Colorado.

“They were big advertising fiberglass giants made in the early ’60s to sometime in the ’70s,” said Holmes. If still attached to its body, it would have been at least 22 feet tall— much too large for Holmes to store.

They were made by a company called International Fiberglass in California. They were called “Muffler Men” because some of the earlier statues held car mufflers, according to roadsideamerica.com.

Holmes had been studying and taking photos of Muffler Men since 2000, so he couldn’t pass up the head that hung inside a bar called the State Armory, in Greeley, Colo., from 1977 to 2009.

“I picked it up thinking it’d be kind of fun to use in parades and such,” he said.

The head recently caught the attention of American Giants, an Internet documentary series on finding Muffler Men, and Holmes took the head to Wichita last week for filming.

Holmes’ Muffler Man head made its Hutchinson debut in the 2009 Christmas parade.

Holmes’ friends Sharon Scott, Patsy Terrell, Jocelyn Woodson, Mark Reddig and a few others helped convert the head into Santa Claus, though Holmes admits it turned out a little scary.

“I can’t say I wouldn’t do it again, because it was kind of fun,” Holmes said, “but hopefully there are no kids in therapy still.”

The head became another attraction when the film crew met with Holmes.

Joel Baker and his crew usually visit the larger Muffler Men around the country—the ones that still have bodies. When they saw Holmes’ Muffler Man, they had to try it on. A crew member fitted the Muffler Man head over his body and carefully walked around. The head nearly reached his knees. He couldn’t see anything, and Holmes said anyone who puts on the head is disoriented.

He looked like a bobble head walking around in front of the camera, but it was something different for the documentary. The crew has visited more than 100 Muffler Men. Episodes began airing in the spring of 2013, on Baker’s YouTube channel.

Holmes said he believes the show he is on will air sometime in the fall, though he has already gotten photo credit for pictures he has taken of Muffler Men around the country.

A shipment of the late actor Dennis Hopper’s Muffler Men from Anaheim, Calif., to Dodge City was featured on A&E’s Shipping Wars.

The problem is Dodge City wasn’t sure where to put them when Hopper died.

The pair weren’t as old as most fiberglass sculptures, with the molds cast in 2000. They were on display at the 3i show earlier this month, which the American Giants crew attended.

Hopper was born in Dodge City, and he said his childhood shaped his artistic foundations, Taylor Livingston, art administrator of the Dennis Hopper Art Trust, told the Dodge City Daily Globe after the pieces were donated to the city.

They weren’t the first Muffler Men in Dodge City. It used to have a statue called Big Matt that stood at the entrance of the Boot Hill Museum. However, according to roadsideamerica.com, it was too windy for Big Matt, whose head was blown off at least four times. High winds and vandalism forced Dodge City to remove the figure.

A Wichita tire dealership has a Muffler Man with lights in its eyes. Holmes thinks Hutchinson needs to incorporate a statue or something like a Muffler Man to attract viewers. He pointed to the popularity of Hutchinson renaming itself Smallville, which has attracted tourists from around the country and the world.

“We don’t have a lot of roadside vernacular architecture,” he said. “You know, things that are designed to look like other things.”

He pointed out the Medicine Shoppe building, the neon sign at Johnson Music Center and the windmill building on Fourth Avenue, but said Hutchinson needs more. It needs something people might want to take their photo alongside when museums are closed.

“We need something permanently whimsical,” he said. “If one of these—the 22-foot variety—was a Superman statue, that would just be awesome. There’s a whole class of tourists that go city-to-city doing things like ‘the world’s largest ball of twine’ or the Garden of Eden.

“It would be nice if we had something a little more ‘roadside America-ish’ to lure people in. And, of course, coincidentally that generates some more tourist dollars, now doesn’t it?” 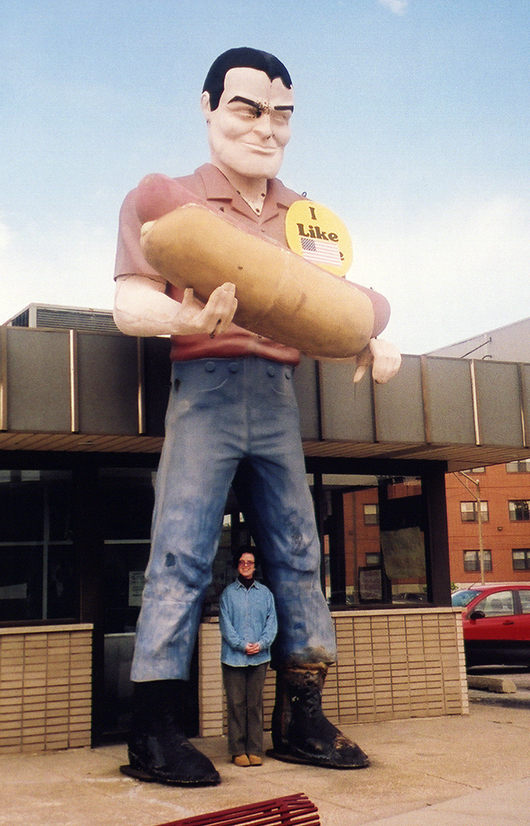 A giant Muffler Man holding a hotdog outside Bunyon’s in Cicero, Ill. Image by Mykl Roventine. This file is licensed under the Creative Commons Attribution 2.0 Generic license.