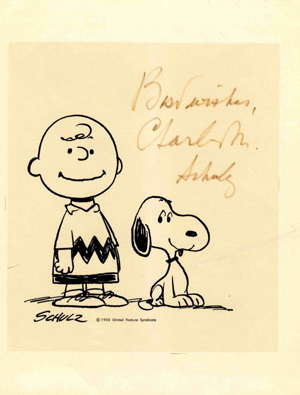 PRESCOTT, Ariz. (AP) – It’s hard to believe Walker Sisson when he tells you he has 25,000 “Peanuts” collectibles – until he shows you the inside of his new shed.

He and his fiancee Karen Terry had to build the shed next to their Prescott residence just to house all of his collection when they merged their homes. It’s larger than the store-bought size, and boxes are stacked to the ceiling.

Christmas-related “Peanuts” characters fill the house. It was Karen’s idea to find all the “Peanuts” items with a holiday theme and display them, instead of keeping most of them in boxes.

Outdoors, they have set up three large Snoopy inflatables, lined up Snoopy characters on the porch railings and set up Snoopy flags on the roofline.

In case that’s not a hint, Snoopy, by far, is Walker’s favorite “Peanuts” character.

“Snoopy’s a dog of the world,” he explained, citing how Snoopy imitates everything from a World War I flying ace to a wilderness scout. “He’s socially acceptable to every gender and every environment.”

Walker moved around a lot as a child, living with relatives and then becoming homeless when his father was ill. He and his six siblings ended up in foster homes.

His foster mother introduced him to Snoopy at about the age of 10, and that’s when he started collecting them.

He understands now that he was looking for something that wouldn’t go away.

His childhood eventually improved, as his family reunited and moved to Prescott in 1969.

He started collecting more and more Peanuts items, and his friends and family bought him more, too.

“Just one thing led to another,” he said.

Walker and Karen both attended Prescott High School but were four years apart and didn’t know each other. They met a couple of years ago through an online dating site and Walker later moved back to Prescott.

“After I met him, I just fell in love with him and Snoopy,” Karen said. “I knew it was a package deal.”

Their wedding at Goldwater Lake next May will include a 2-foot-tall Snoopy and Belle bride and groom, and they’re thinking of staying at Camp Snoopy in Southern California for their honeymoon.

Karen has embraced Walker’s love for Snoopy, and Walker has embraced the idea of sharing his love of Snoopy with Karen’s nine grandchildren – “under close supervision,” Walker added.

Karen said her grandchildren get a big kick out of seeing Snoopy everywhere when they visit Karen and Walker. Her niece, Kelly Campbell, even created a YouTube video about Walker’s collection.

Right now, alongside the aforementioned Christmas items, their home features shelves covered with “Peanuts” music boxes and coin banks. The kitchen includes “Peanuts” potholders next to a Snoopy-shaped waffle iron and a newly baked Snoopy-shaped cake.

Among his oddest items are unauthorized knockoffs that the Charles Schulz family isn’t likely to authorize in the future, such as cigarette lighters and shot glasses featuring a pregnant Lucy.

When they want to match their house during the holidays, they dress up in Snoopy earrings, hats and T-shirts.

Walker honestly cannot name his favorite Snoopy item. Among his most prized are his Danbury Collection items such as the “Peanuts” gang sledding down a hill.

And he cannot stop looking for more Snoopy items at thrift stores and garage sales every weekend, although he’s afraid to search the Internet sites such as eBay.

How does he know whether he already has something before he buys it?

Walker and Karen now are working on a Web site at www.peanutswest.com, and they’d love to put all of Walker’s collection on display in a museum someday.

Information from: The Daily Courier, http://www.dcourier.com

Degas painting stolen from museum in France
Scroll to top