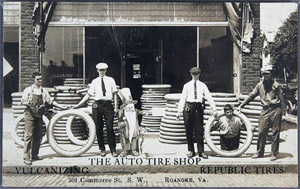 Warrenton was “quite a nice little town,” according to an Army private in 1944. In 1938 in Leesburg, a group of men went fishing while the women “walked into the town drugstore and bought something.”

These snippets of Virginia history spilled out of a wheeled suitcase on a recent morning – just a few of the hundreds of postcards from around the
state that Josie Ballato, a government employee who lives in Falls Church, has amassed.

“I’m really interested in the life that’s gone,” said Ballato, 50, who has compiled some of the postcards into a book and will give a lecture on them Friday at the Loudoun Museum in Leesburg. Why did they take these pictures? Who was paying for them?”

The postcards – some mailed, some pristine – span from Teddy Roosevelt’s administration to John F. Kennedy’s: chaste black-and-white lithographs of town halls; color photos of futuristic diners; landscapes with hand-painted pink skies; log cabins with families lined up and squinting at the camera.

Traveling salesmen teased their sweethearts, soldiers prepared for war and schoolgirls visited their aunts in rural towns. For some, their brush with Virginia was ephemeral – the minutes it took to jump out at a train station, buy a card and scribble a note before the whistle blew. Postage cost a penny.

They are a precursor to e-mail and Facebook status updates – a quick sentiment or observation, the marking of a moment.

But as a collection, they tell the story of Virginia at a time of transformations. New roads and railways were allowing more Americans to
travel for work and pleasure. The Depression and two world wars brought about more movement, and more postcards.

The brevity of the messages was compulsory, at first. At the turn of the 20th century, the back of a postcard was reserved for the address; senders
had to cram a line or two into the white space around the picture. In the early 1900s, a change in postal regulations allowed a divided back: half for the address and half for the message.

Addresses often didn’t have streets or house numbers, just a name and a town. “The postman knew, basically, how to get it to the people,” Ballato said.

Early cards included black-and-white lithographs made in the United States and sent to Germany to be hand-painted by people who probably had never been to Virginia.

“It’s just like today – everyone wanted the latest technology,” Ballato said. “So a black-and-white print was okay, but boy, was it cool if you
could get a colored card.”

Towns often made their own cards, featuring what they wanted to show off. In a postcard from Warrenton in the 1920s, most of the frame is taken up by an empty street. “Some of these images I think they made because they wanted to show that, by gosh, they had paved roads,” Ballato said. “I’m thinking of it as a bragging card.”

Another early card showcased the Goose Creek Electric Power Dam east of Leesburg. “It was to publicize the advanced world that they were in – ‘Look, we’ve got a dam, and we’re generating electricity from it, and aren’t we advanced?’ It’s kind of like saying, ‘We have high-speed Internet.'”

Most often, travelers reported having a “fine time” in Virginia. But not always. One visitor informed the folks in Wisconsin that the meal he ate at the Robert E. Lee Restaurant in Warrenton in May 1947 was “not so good.”

“L.E.D.,” from Granville, N.Y., visited the county fair in Gordonsville in October 1914 and wrote, in now-faded curlicue calligraphy, “There are lots of nice girls down here but don’t tell E.W. for she might worry.”

Ballato, who gets the cards from online auctions and postcard dealers, became interested in the cards because they depicted scenes she had heard
about from older relatives when she was growing up in Culpeper. Some looked familiar: A 1940s card showing fox hunting near Middleburg looks close to what might be seen today.

But perhaps more intriguing are the cards with scenes unfamiliar to Ballato. Often, key buildings are gone or the landscape has been radically
transformed.

“It’s a bit like a detective story,” she said. “I would drive through and I would hold the card up and I would stand there.”

Local libraries lent a hand in identifying the locations based on the images and captions.

“We were able to identify a couple of areas and streets by looking at our photos and maps,” said Rita Holtz, an assistant at the Alexandria Library’s Barrett Branch, where Ballato has done research.

“There are now houses all over this land, near Warrenton,” Ballato said, pointing at a pastoral landscape on one card. Another Warrenton scene shows the courthouse, which is still there but without the water pump and little bench it had around World War I.

“When something is no longer there, I go, ‘Why, why is it gone?'” she said, noting that the cannonballs outside the Culpeper courthouse
disappeared in the 1940s when the country was melting down metal for the war effort.

Certain images were in vogue at certain times. The centennial of Lincoln’s birth in 1909 brought a rush of cards depicting log cabins. The Virginia state girl, holding a sheaf of tobacco leaves, had her moment soon afterward, and in the 1920s, a common postcard featured a messenger girl and the caption “Getting Shorter Every Day!” – a playful dig at the era’s rising hemlines.

“A lot of these cards were written by young men to young ladies back home,” Ballato said. “This was a polite way to say, ‘I’m thinking about
you,’ without it being a love letter. And I’m sure the ladies were thrilled to get the cards.”

Some cards tell of rituals lost to history – Court Day in Culpeper, for example, when a judge would ride around in a circuit, stopping at each town (hence the term “circuit court”). The cards show men and horses crowding into the street. Women would stay home, Ballato said. “The men came in to trade horses, to gamble, to drink, to raise hell, basically.”

“This is the real Virginia!” a traveler from Philadelphia wrote on one of them in 1909.

Some cards marked unusual occurrences, such as a giant snowdrift in Monterey, in 1940. Some are mysterious, such as the “Grave of the Female
Stranger” in Alexandria. According to the caption, an unknown couple checked into the Alexandria City Hotel in September 1816. The woman was “very ill” and soon died; “the husband selected this tomb, left the site, and was seen no more.”

A 1917 card from Orange marks another passing. Captioned, “Main Street Looking West,” it shows people in the street, standing around looking at a new motorcar. In the background, a horse and buggy recede into the distance.