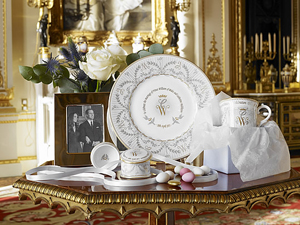 LONDON (AP and ACNI) – Britain’s royal wedding is still four months away, but the first official memorabilia went on sale yesterday –  a range of wedding china personally approved by the couple.

Prince William’s office said the items had been commissioned by the palace department responsible for the royal family’s art collection and made in Stoke-on-Trent in central England, a traditional center for British ceramics.

The three souvenirs – a tankard, plate and pill box – each feature the couple’s entwined initials, the prince’s coronet emblem and the date of the wedding: April 29, 2011.

On sale at royal palaces and a website, profits from the collectibles will be donated to the charity which curates the royal family’s artworks, known as the Royal Collection.

“The Royal Collection has been working on the design since around the time of the engagement – it’s a very fast moving process,” William’s office said in a statement.

His office said that the prince and his future bride had both approved the wedding merchandise. However, the officially sanctioned goods, which do not include images of William and fiancee Catherine “Kate” Middleton, have met with a rather lukewarm response from the British media.

Stephen Bayley, cultural and design critic for The Telegraph, went so far as to describe the conservatively themed china with muted foliage, ribbons and doves as “polite and dull…lazy and insipid.”

He offers one positive note, though: “The decoration thankfully disdains cloying sentimental portraits and hints at the pleasantries of The Festival of Britain in the Fifties – but it fails to be anything more exciting than pallid.”

The future King and Queen Consort made their first joint public appearance on Saturday since announcing their engagement. The couple attended a cancer charity fundraising event in eastern England.

The Royal Wedding will take place at Westminster Abbey on April 29, 2011.

Copyright 2010 Associated Press and Auction Central News International. All rights reserved. This material may not be published, broadcast, rewritten, or redistributed. 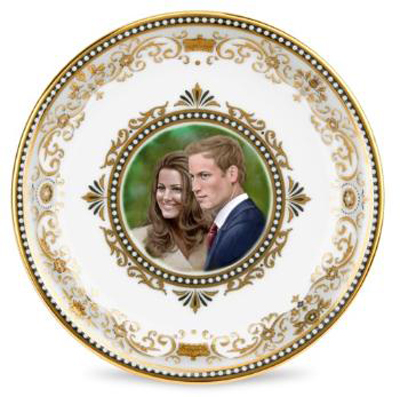 An alternative to the officially commissioned goods, the Royal Wedding round tray by Royal Worcester has a retail price $26.49. Image courtesy of UK Gift Company. 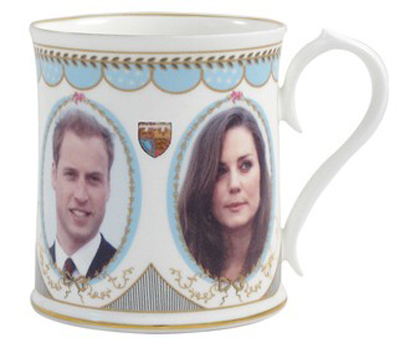 Although not officially commissioned, the Royal Engagement tankard by Aynsley features images of the betrothed couple and retails at $39.76. Image courtesy of UK Gift Company. 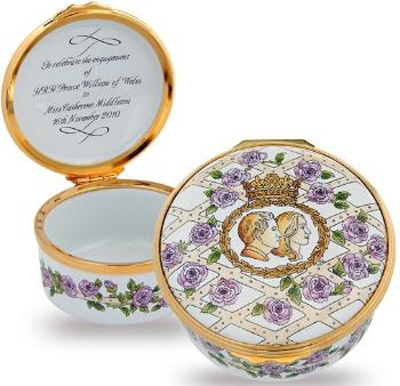 Halcyon Days produced their own line of "unofficial" Royal Wedding goods, including this Royal Engagement box, limited edition of 250, with a retail price $232.35. Image courtesy of UK Gift Company.

Royal wedding a business boom or drag on the British economy?

Royal knitting book has William and Kate in stitches