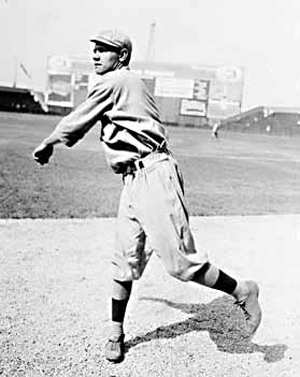 BALTIMORE (AP) – Much like the icon it depicts, the 1914 Babe Ruth baseball card is renowned for a variety of reasons.

For a collector, it’s a unique treasure worth hundreds of thousands of dollars. It is the first Babe Ruth card, and fewer than a dozen are known to be in existence.

“It’s right up there with the holy grail of baseball cards,” said Brian Fleisher of Beckett Media, one of the nation’s foremost authorities of sports collectibles.

Collectors consider it to be the Babe Ruth rookie card, even though at the time he was a 19-year-old pitcher for the Baltimore Orioles of the International League.

To Glenn Davis, the card represents a loving link with his grandfather and father. Arch Davis sold newspapers on the streets of Baltimore in 1914, and the Ruth card was among a series inserted in the old Baltimore News. Arch Davis kept a set of the cards and passed it along to his son, Richard, who loaned the set to the Babe Ruth Museum.

After Richard Davis died, his son, Glenn, determined it was best to keep the cards at the museum. That is where they are today, in a glass case just a few yards away from the room where Ruth slept as a child.

“I have always felt good about knowing that something that my grandfather and father considered worthy of saving is now available for others to enjoy,” Glenn said. “My sons go and see the cards, on occasion, and my wife, who taught for many years in Baltimore, would take her class to the museum and point out the cards to her students.”

For Mike Gibbons, the executive director of the Babe Ruth Museum, the card represents an early glimpse at a man whose popularity would transcend baseball, and a man who would forgo life as a star pitcher to become arguably the greatest slugger in baseball history.

“I think that this helps me to really get in touch with him,” Gibbons said. “Here he is in the card, depicted as a strapping young 190-pound, 6-foot-2 athlete on the verge of the biggest stardom this country—or even the world—has ever known.”

Ruth was known as a great baseball player. He also had a reputation of being a carousing, hard-drinking, cigar-smoking child of a man. Yet he often visited hospitalized kids, and his popularity had no bounds.

“This card reminds me of just how special an icon he was for our culture, and I’m not just talking sports culture,” Gibbons said.

The Babe Ruth museum is housed in the building where Ruth was born in 1895. On display are an old Ruth glove; a game-used bat from his 60-homer 1927 season with the New York Yankees; and the ball he signed while promising to hit a homer for ailing Johnny Sylvester before Game 4 of the 1926 World Series (Ruth hit three).

Those items have nothing on the Ruth card.

“It’s right up there,” Gibbons said.

Only the 1909 T206 Honus Wagner card (valued at over $2 million) has drawn higher bids. But Fleisher says there are “around 50 or 60 Wagner cards out there,” far more than the Ruth card.

Of the Ruth card, Fleisher said, “If it’s not the most valuable card, then it’s the second-highest in our data base.”

For now, the 58-year-old Davis is content to leave the card in its current home.

“I’ve been approached several times about selling the card, and the truth is, one day the card will be sold,” Davis said. “There are only nine other Babe Ruth cards known to exist and they are sitting in private collections, out of sight from everyone but their owners.”

Gibbons is eager for more people to see it. He’s seeking a sponsor so he can take the card on tour to ballparks and shopping malls.

Until that happens, the card will remain in the place Ruth called home.

“It belongs to our community, and I think the Davis family understands that,” Gibbons said. “I don’t put a price tag on it. It’s like a gem, an heirloom that gets passed on through the family. Our mission is that this card is preserved, maintained and cared for so that 100 years from now, your great-great-great grandchildren can see it and understand who Babe Ruth was.”