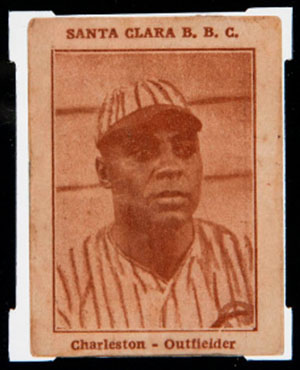 1923-24 Cuban baseball card for Oscar Charleston, outfielder for the Santa Clara Base Ball Club. From a complete collection of 84 SGC-graded baseball cards issued by Tomas Gutierrez, a Cuban tobacco company that manufactured Diaz brand cigarettes. To be auctioned by Hake’s on March 18, 2014. Hake’s image.

YORK, Pa. – A rare treasure of both Cuban and baseball history will soon be crossing the auction block. Hake’s Americana & Collectibles has announced that on March 18 they will sell the only complete collection of Cuban baseball cards issued in 1923-24 by Tomas Gutierrez, manufacturers of Diaz brand cigarettes, ever to cross the auction block.

“To give you an idea of how valuable this set is to collectors, we sold eight cards from the same series (from the late Richard Merkin’s collection) for $30,000. The cards in this set are in higher grade, and there are 84 of them,” said Hake’s General Manager Alex Winter.

The set spans a who’s who of Cuban baseball talent of the 1920s. The players featured in this set include not only members of the Cuban and Negro League Halls of Fame, but also five players inducted into the National Baseball Hall of Fame. The estimate on the set is $75,000-$100,000. Bidding is already at $50,000.

The auction also contains early Cuban baseball memorabilia from the fabled Richard Merkin collection, including news service photos of teams and players; a few signed documents, a broadside, scorecards and other rare ephemera.

Cuba has been a hotbed of baseball talent for far longer than most people might imagine. The Habana Base Ball Club was founded in 1868. Ten years later, the Cuban League was established. After the Spanish-American War, Cuban teams had greater opportunities to compete against their U.S. counterparts, which led to a number of white Cuban players migrating to American teams. At around the same time, Negro League stars found a sunny haven and hospitable welcome in Cuba, where they added muscle to Cuba’s formidable integrated teams.

Early Cuban baseball cards and photos document the superstars of an important era and remind collectors that the island nation 90 miles from Key West was light years ahead of the USA when it came to assessing players on their ability and not their race. 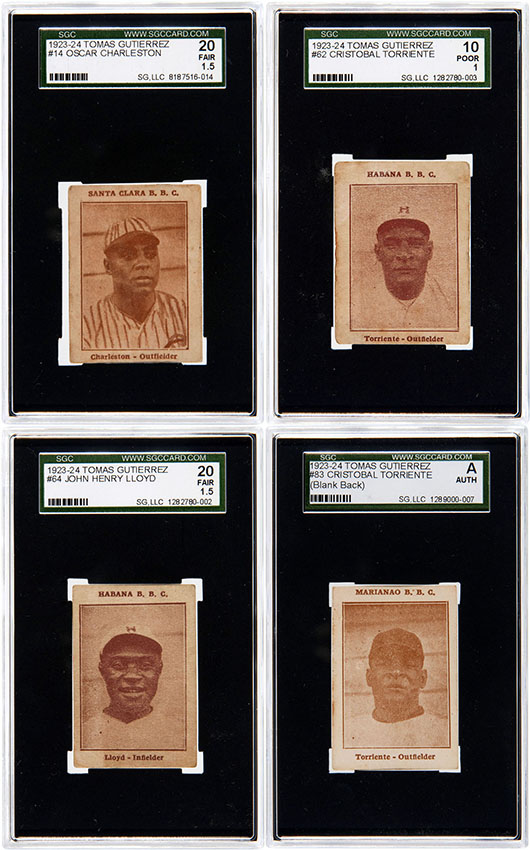