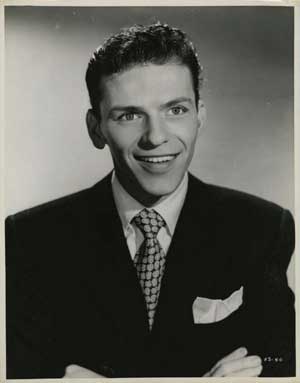 LAS VEGAS (AP) – Steve Wynn is having a ball as he prepares to open his newest joint, mostly because it’s bringing back memories of Frank Sinatra that date back 30 years when the Chairman of the Board and the young entrepreneur forged a friendship out of a business relationship.

Track by track, song by song, the casino billionaire shows himself to be a formidable historian as he talks about a former vocal coach who trained Ol’ Blue Eyes to sing lower notes, and rattles off names of songwriters, arrangers and musicians who composed the details of the entertainer’s career.

The singer’s name and much of his personal memorabilia will grace a Sinatra-themed Italian restaurant when Wynn’s latest resort-casino, Encore, next week in Las Vegas.

“I didn’t plan on it, but voila,” Wynn said as he sat at a table in his executive office with Oscar, Grammy and Emmy awards won by Sinatra. In 1953 Sinatra received an Academy Award for his supporting role in From Here to Eternity.

“To me, that Oscar and what it stands for in Frank’s life, is as priceless as anything that I’ve ever witnessed and I’ve seen the Mona Lisa and the Statue of David,” said Wynn, the chief executive of Wynn Resorts Ltd.

Wynn, 66, has become a steward of his old pal’s legacy as he prepares to open the $2.3 billion Encore on Monday. The resort was planned in 2005, but Wynn and the Sinatra family agreed to the collaboration just two months ago.

“This isn’t simply some Italian eatery somewhere with a picture of Sinatra on the menu and some bologna,” Wynn told The Associated Press after skipping through a four-hour disc of Sinatra cuts with never-released audio of the crooner introducing most tunes.

Tina Sinatra, Frank Sinatra’s youngest daughter, said the family had rejected similar plans from 12 restaurateurs previously. Some of the ideas she squashed herself, she said. “It was always more of a difficult decision than anything I’ve ever had to consider, really,” said Tina Sinatra, 60. But she said Sinatra the restaurant exists because the family believes Wynn truly cares about their father.

“He loves him,” she said. “He was his friend and he loves and protects us.”

Wynn and Sinatra worked together and were friends in the early 80s, when Sinatra sang for Wynn at the Golden Nugget hotel-casinos in Las Vegas and Atlantic City, N.J. Wynn was in his early 40s, Sinatra was in his 60s.

“I ended up being his friend because he said ‘Steve does everything right. The kid pays attention. I like that,'” Wynn said. “I wasn’t his son; I was too young to be his crony – that was Dean (Martin) – I didn’t run with Frank or chase girls with Frank or anything like that.”

The public caught glimpses of the pair’s relationship through a series of humorous commercials promoting the Nugget casinos. Wynn was usually the butt of jokes, treated as a bellhop or other low-level employee by Sinatra.

“It was hijinks, which was very Sinatra-ish. If you’re secure enough to act silly, then you must be OK,” Wynn said.

The first commercial, filmed on Wynn’s 41st birthday for the Golden Nugget in Atlantic City, features Wynn on the casino floor talking about the place being a dream casino to run when he is interrupted by Sinatra.

As Sinatra walks away, Wynn mouths the word “baby,” with a slight wince.

Wynn says the popular gag that led to a string of 14 commercials might have never happened if Sinatra hadn’t been boiling mad the night of the filming. Wynn never planned to be in the spot, it was supposed to be all Sinatra.

But Sinatra was upset because he had been denied credit in the casino to play baccarat. New Jersey gambling laws required him to be preapproved, Wynn said. An employee denied Sinatra the chips and the entertainer was left steaming for 20 minutes before Wynn was informed.

Sinatra delivered the spot as written, but the producers felt his delivery didn’t work, Wynn said.

So they ad-libbed the other version, and Wynn later took both to Sinatra to see which he thought was better. Wynn said Sinatra was a harsh self-critic.

After that, Sinatra started getting calls from friends who enjoyed the first commercial, so he asked Wynn to make more, telling him “don’t let it get stale.”

Wynn said the spots showed how Sinatra felt responsibility for the Nugget, where he earned money from performing and stock options.

“He didn’t like just being a singer,” Wynn said.

That led to Wynn and Sinatra traveling around the country and abroad to host parties, timed around Sinatra’s performances in Las Vegas and Atlantic City.

Wynn said he and Sinatra weren’t as close after Wynn sold the Atlantic City Golden Nugget and moved on to design The Mirage and other hotel-casinos on the Las Vegas Strip.

Wynn said they kept in touch occasionally, and he attended Sinatra’s funeral in 1998.

“I thought that was it,” Wynn said. Bringing back the memories of Sinatra has been a bonus he never expected, he said.

The restaurant was originally going to be named Theo’s, after executive chef Theo Schoenegger, who is well-known in culinary circles as executive chef of Patina at the Walt Disney Concert Hall in Los Angeles.

Schoenegger said he’s not sure other chefs would have been happy to back away from their own signature restaurant, but he thinks the change will bring more customers and challenge him as a chef. Not all fans will be fine diners, but the place aims to be a high-class destination.

“I need to create food that everybody likes,” said Schoenegger, who shares the singer’s birthday, Dec. 12.

The space itself, tucked in a corner of the resort near the high limit tables and VIP check-in, channels Sinatra through his memorabilia. There are large photos of him in the dining room, bar and leading into the kitchen, and another of Sinatra and Wynn together in a private room known as the Chairman’s Room.

Wynn said when he picked up the memorabilia from Sinatra’s family in Los Angeles, he brought it back to his office and was instantly reminded of his old friend.

“I got the Oscar in my lap, I lit up a cigar and I turned on Sinatra, and I was by myself at 9 o’clock at night I was sitting here I was about to cry I was so happy,” he said.

Wynn says a Sinatra steakhouse might be included in the company’s planned $700 million Macau Encore in the Chinese gambling enclave. He said he and Sinatra’s family want to build it to continue sharing Sinatra’s music and life with the world.

“The children and I are in our 60s. The calendar and the clock, the chronology is running on all of us,” Wynn said. “Frank and Dean are gone, and Sammy – but these memories and these relationships were real.”
___