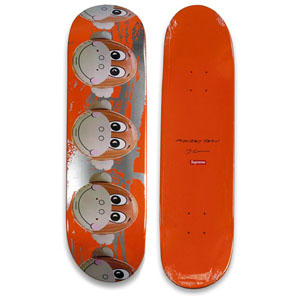 Jeff Koons titled the skateboard deck he did for Supreme in 2006 ‘Monkey Train.’ The work is silkscreen on wood. Image courtesy of LiveAuctioneers Archive and Treadway Gallery.

CHANDLER, Ariz. (AP) – As long as skateboards have been around, kids have been covering them in stickers and drawing on them with markers.

Maybe that’s why a Chandler art show full of skate decks seems to strike a chord with all ages.

“People are excited about it. People have fond memories of skateboarding as kids, and it just kind of brings back that childhood joy we’d all like to tap back into,” said Eric Faulhaber, visual arts coordinator at Vision Gallery where patrons dropping by this week have been eager to see the gallery’s next show.

Full Deck: A Short History of Skate Art opened last week at Vision. An anthology of skate art from the 1960s to the present, the show includes almost 300 decks borrowed from pro skaters, skateboarding companies and artists across the country.

Skate art graphics “tend to be extremely vivid and extremely personal, and many of them have some strong social, political or economic component,” Faulhaber told the East Valley Tribune. “(Skateboards) have always been a really good mode of self expression for the person using them.”

Among the decks, you’ll see the usual skulls, dragons and monsters, but there are also some unexpected faces: Johnny Cash, Sitting Bull, Batman and Hillary Clinton. Elmo, with his arm in a sling, the Tin Man from the Wizard of Oz, and a half-octopus pirate baby coddled by a mermaid mother also make appearances.

Full Deck also includes a display of about 25 early wood and aluminum boards circa 1960 and a 1920s or 1930s-era rudimentary skateboard prototype.

The exhibition was curated at the Bedford Gallery at Lesher Center for the Arts in Walnut Creek, Calif. It is traveling to museums, galleries and universities across North America. 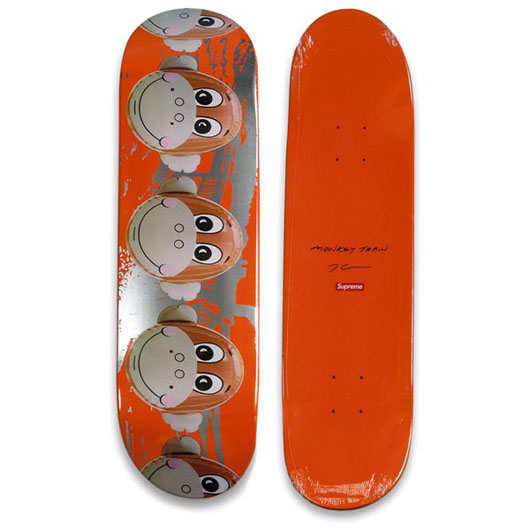 Jeff Koons titled the skateboard deck he did for Supreme in 2006 ‘Monkey Train.’ The work is silkscreen on wood. Image courtesy of LiveAuctioneers Archive and Treadway Gallery.