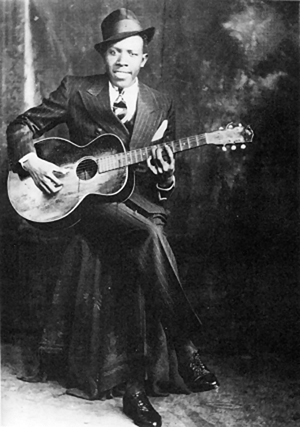 The ‘studio portrait’ of legendary bluesman Robert Johnson was taken around 1935 in Hooks Brothers Studio in Memphis. Copyright 1989 Delta Haze Corporation. Fair use of low-resolution copyrighted image under terms of US Copright Law. No other copyright-free image of the subject is believed to exist.

JACKSON, Miss. — Only two photos of bluesman Robert Johnson — said to have sold his soul to the devil for his guitar talent — are known to exist. One, known as the “studio portrait,” was made for Johnson by Hooks Brothers Studios in Memphis, Tenn. The other, referred to as “the dime store portrait” or “the photo booth self-portrait,” was taken by Johnson himself.

Johnson’s heirs have been fighting over those photos — and his music — for nearly two decades. A Leflore County judge ruled in 2001 that when son Claud Johnson was declared the musician’s sole heir, the royalties provided for the photos and some biographical material were to go to him.

Robert Johnson died in Leflore County, Miss., on Aug. 16, 1938, without leaving a will. Disputed accounts of his death include that he was poisoned by a woman’s jealous husband or that he was stabbed.

Johnson — legend says he sold his soul to the devil at a Delta crossroads, which inspired the 1986 movie “Crossroads” — recorded 29 songs before he died nearly penniless at age 27. But his music has stacked up royalties.

In 2003, the Supreme Court sided with a Leflore County judge who ruled that Claud Johnson should receive royalties from his father’s photographs and music. The ruling voided a 1974 contract signed by other Johnson heirs giving them ownership of the material.

In 2004, the Supreme Court reversed itself and ordered a trial in Leflore County on whether all of Robert Johnson’s memorabilia was owned by Claud Johnson. At the center of the case are the two photographs.

A Leflore County judge again ruled in 2012 that the photographs belong to Claud Johnson.

The Mississippi Supreme Court will hear oral arguments in the family’s case Sept. 23 in Jackson.

Claud Johnson, the son of Virgie Jane Smith, was born out of wedlock in Lincoln County on Dec. 16, 1931. His birth certificate names R.L. Johnson as his father and lists his occupation as a laborer.

At the time of the musician’s death, Carrie Harris Thompson, Robert Johnson’s half-sister, held herself out to be Johnson’s sole living heir. Thompson took possession of Johnson’s photographs.

On Nov. 20, 1974, Thompson signed a contract with promoter Stephen C. LaVere to assign all her purported rights to copyrights of Johnson’s work, photographs and any other material concerning Johnson that she might have. In return, LaVere was to pay Thompson 50 percent of all royalties he collected in his efforts to capitalize off Johnson.

Annye C. Anderson and Robert M. Harris argued that they were entitled to the royalties as heirs to Thompson, who died in 1983. Anderson is Thompson’s half-sister, but is not related to Robert Johnson. Harris is Thompson’s grandson.

Claud Johnson found out about his father’s estate in the early 1990s, after Thompson’s death, and went to court. In 2000, Claud Johnson was declared the musician’s sole heir.

After that, in 1989, Anderson and Harris sued LaVere, Delta Haze Corp. and Sony Music Entertainment, claiming they were willed Thompson’s royalties when she died in 1983. Claud Johnson was not a party to the lawsuit.

LaVere signed a deal with CBS Records to release a new Robert Johnson collection. CBS, later acquired by Sony, released a boxed set of Johnson’s recordings. It sold more than a million copies and won a Grammy in 1990.

Leflore County Circuit Ashley Hines ruled in 2001 that when Claud Johnson was declared the musician’s sole heir, the royalties provided for in the 1974 contract were to go to him.

The Supreme Court found in 2004 that the question of whether the photos were the personal property of Carrie Thompson was never litigated. It directed Hines to rule on the issue.

Hines, without a trial, found in 2012 that there was no triable issue of fact on the merits of the plaintiffs’ arguments for royalties and breach of contract.

“Without the iconic photos of Robert Johnson, his mother, father and Carrie Thompson herself and his life story, Sony would not have issued and sold recordings of Robert Johnson, earning untold millions of dollars in the process,” attorneys for Anderson argue in briefs.

Anderson argues that her half-sister as the only surviving family member was closer to Robert Johnson than anyone else. Anderson argues LaVere offered false promises of riches for copies of the snapshots and without her knowledge offered the record company the photos and “her account of Johnson’s childhood and life.”

Sony counters that it had a valid agreement with LaVere and that the issue of ownership was settled when Claud Johnson was declared Robert Johnson’s legal heir, not Thompson or Anderson.

Attorneys for Sony said that after a decade of litigation, Anderson still has no evidence of any wrongdoing against has record company. The company said LaVere and his Delta Haze company were free to license the photographs to Sony and the parties could agree to whatever terms they wanted.

“The record before the court provides no evidence that Sony Music violated any of its duties of good faith and fair dealing toward Thompson and her heirs. Thompson entered into a contract with Sony Music and Sony Music complied with the terms of the CBS contract,” Sony attorneys said.

“Under the plain language of the CBS contract, Thompson agreed to CBS using the photographs, biographical materials and other artwork she furnished LaVere in respect to the album.” 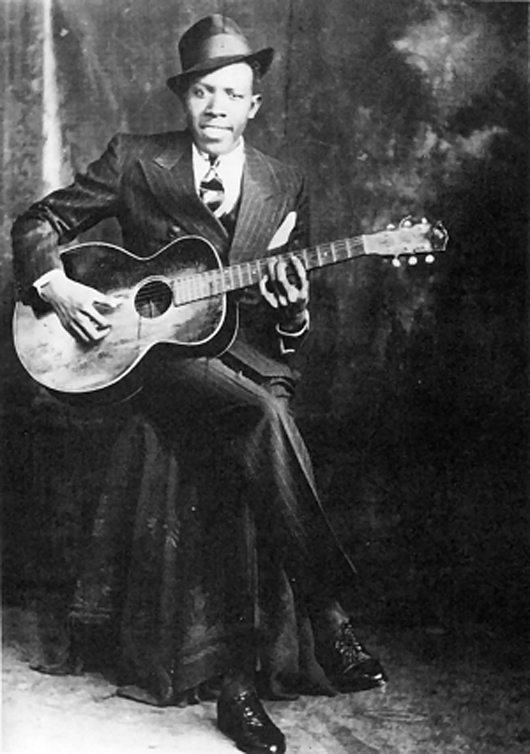 The ‘studio portrait’ of legendary bluesman Robert Johnson was taken around 1935 in Hooks Brothers Studio in Memphis. Copyright 1989 Delta Haze Corporation. Fair use of low-resolution copyrighted image under terms of US Copright Law. No other copyright-free image of the subject is believed to exist.