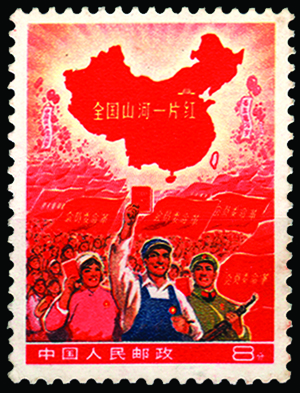 1968 ‘The Whole Country is Red’ 8f Chinese stamp, auctioned for $47,700 at a Dec. 15 Stanley Gibbons auction in London. Image courtesy of Stanley Gibbons.

LONDON – Stanley Gibbons’ public auction held on Dec. 15 in London showed that Asian material is proving very popular with bidders, with the China section of the sale more than doubling its lower pre-auction estimate of just over £56,000 ($78,000). All prices quoted are inclusive of 15% buyer’s premium unless otherwise noted.

The Penny Black has proved popular among Chinese collectors, with Stanley Gibbons selling out of stock at an event in Beijing in November. Stanley Gibbons CEO, Mike Hall advised that, with Chinese collectors prepared to pay well over catalog prices, the value of this relic of British philately would surely increase. Buyers of the 1d black at this month’s auction may well have secured themselves a great deal if the trend continues, Gibbons noted.

The auction also raised more than £4,600 on the hammer ($7,065) for the Jersey-based “Durrell Wildlife Conservation Trust.” All 39 lots auctioned specifically to benefit the cause found new homes.