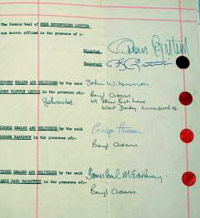 LONDON (ACNI) – When the Beatles recorded Can’t Buy Me Love, one of their early no. 1 hits, they could not have imagined that a fan would someday spend a fortune to own the signed document that launched their musical careers. The Beatles’ first contract, signing on with manager Brian Epstein in 1962, has sold online for $211,597 in an auction conducted by the Fame Bureau, a British auction company specializing in rock ’n’ roll memorabilia.

The price, inclusive of the buyer’s premium, represents the highest amount ever achieved through LiveAuctioneers by an auction house outside the United States. The historic document sold to an Internet bidder at the Fame Bureau’s auction Nov. 27.

LiveAuctioneers’ CEO, Julian R. Ellison, said he was “ecstatic to see that people have the confidence to purchase items online at this price level. Because this was the very first contract signed by the Beatles and Brian Epstein, it is especially significant to the history of pop music. There’s no overestimating its importance.”

The Fame Bureau described the contract as an important document in both music and British history.

All four members of the Beatles signed the initial contract on Jan. 24, 1962. The Fame Bureau’s auction catalog noted that, according to Epstein’s memoirs, the Beatles’ first manager refrained from signing the management contract to give the lads the ability to walk away from the agreement if he did not fulfill his promise of landing them major recording contract. By Oct. 1 that year, Epstein, believing he had thus far fulfilled his role as manager, had added his name to the contract. He had signed the Beatles to a recording contract with EMI, and their first single, Love Me Do, was about to be released.

The five-year contract called for Epstein to receive 25 percent of the gross earnings of the band. The document detailed Epstein’s obligations, including undertaking all advertising and publicity for the musicians and advising them on matters concerning clothes, makeup and presentation and construction of their acts.

Included on the document are the signatures of George Harrison’s and Paul McCartney’s fathers, as those younger Beatles were under the age of 21. The contract contains two signatures by John Lennon, who, inadvertently signed in the wrong place. Realizing his mistake, he struck through the first signature and signed again in the correct position.

Ellison remarked that there has been no downturn in the bidding volume through LiveAutioneers since the recent woes in world financial markets. “It has held very strong,” he said. “As a general trend, people are turning more and more to the Internet for all types of buying. We’ve noticed a marked bidding increases in sales conducted by auction houses internationally, as well.” 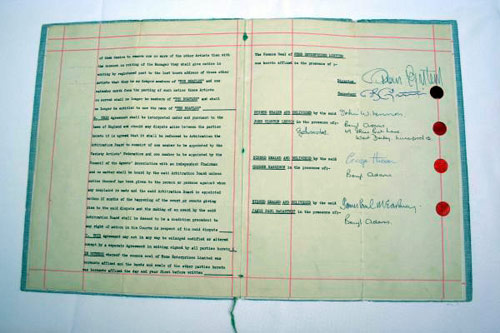 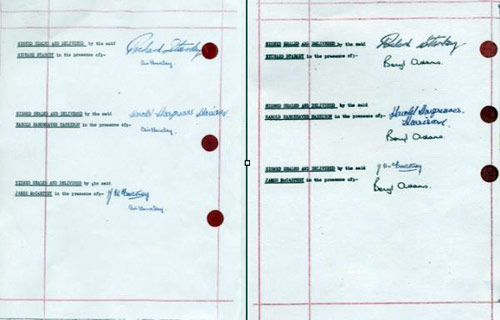 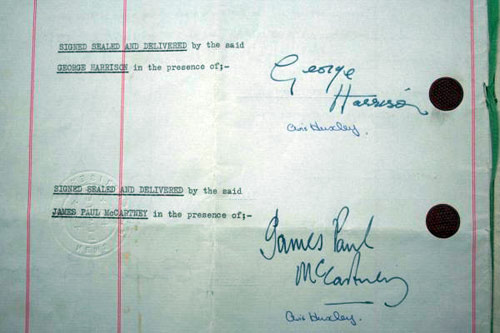