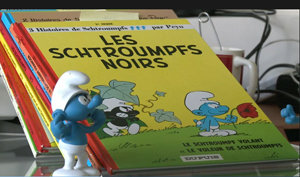 PARIS – They’ve foiled the evil Gargamel time and again, but now the Smurfs could be facing their biggest threat yet – from social commentators who say the blue-skinned cartoon characters are purveyors of racism and anti-Semitism. A new book released in France reviews the ideological battles over the Smurfs and shows Papa Smurf, Smurfette and the rest of the gang in a whole new light.