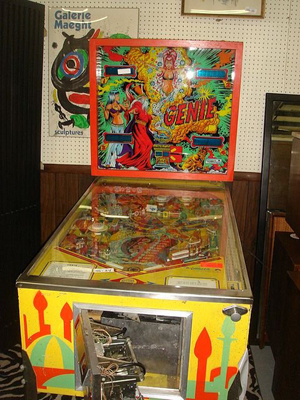 Alexi Anastasio became fascinated with pinball while playing a Genie, a solid-state machine made by D. Gottlieb & Co. in the late 1970s and early ’80s. Image courtesy of LiveAuctioneers Archive and Dutch Auction Sales.

The programming work is for a local company that keeps the props spinning for the nuclear Navy. The rest? Blinking, buzzing pinball machines.

The 43-year-old Corning, N.Y., native spent his middle-school years during the height of the arcade boom. The summer before he entered high school, he had spent so much time in arcades that he was the world-record holder for the high score of the video game, Frenzy. But as the arcade fad waned and the town’s arcade went out of business, it wasn’t a video game he salvaged; it was a pinball machine – two of them.

Both Gottlieb Genies – a dead one for spare parts, of course – languished at his parents’ home while he attended Virginia Tech.

“When I graduated, my father said, ‘Look, you’ve got to get rid of these things,’” Anastasio said. “We moved them down from New York to where I was living at the time in Appomattox. By that time, they’d both stopped working.”

Fresh out of school with a career to build, the pinball bug wasn’t dead, but it was dormant. He sold the machines in the early 1990s to a man in Forest, Va. But a few years later, the bug awoke. He put an ad in the newspaper looking for a pinball machine.

The game he found was in rough shape. One flipper was sticking straight up. The other was missing. He had no idea what to do with it, but he was savvy enough at the time to realize he could use the Internet to figure it out.

“I took it home and stripped it down,” he said. “I poured hundreds of hours into this thing and completely restored it. I was just hooked. It was as close to new as it was going to play.”

The one machine turned into four, then 16, then 25. The number now is closer to 10, he said in a tone that was either unsure or hedging a number in dispute by those who have seen his basement.

“They tend to multiply like rabbits,” he said. “It’s quite an obsession.”

He was even able to buy back, through sheer chance, one of his original Genie games.

Anastasio said he loves to play the games and loves to work on them, though he prefers not to play games he’s restored.

“By the time I’m done restoring a game, through the testing after you get it where it’s working, there’s no thrill anymore,” he explained.

Games made before 1979 tend to work on a series of mechanical switches. He said he assumes they’re all dead from the start and systematically resets contact points and switches, replaces rubber bumpers and makes sure flippers are working like new. Those made afterward are more reliant on circuit boards and modern electronics.

The newer games are less labor-intensive to restore, but parts can be much more expensive to replace. For the Playboy pinball game sitting in pieces in his workroom, one circuit board can cost $80. Another is more than $200.

Replacement parts – both new and old stock – are often easy to find, he said, but some rear displays, called back glass, can be tricky to find. Some folks have even remade playing fields.

“Those tend to make a game worth more money,” he said. “If it looks as new as possible, it actually enhances value. It’s not like having an antique where changing the hardware is going to destroy the value.”

The average restoration takes about two months. Pricing starts at $200 to $300 but often doubles the value of a game. At one time, he said, he considered turning the venture, dubbed on his website, Anything Pinball, into a business. As it is, he said, he should probably charge a lot more than he does. To turn it into a business, he said, he’d have to charge so much that it wouldn’t be affordable for the average enthusiast to have a game fixed up.

He said he wouldn’t be doing it if he didn’t like bringing the games back to life.

“In the end you have something useful that someone is going to get a lot of enjoyment out of,” he said.

Most of his customers tend to bring him games from within driving distance, although he has sold games to buyers as far away as California.

And while he doesn’t do much work with restoring older video games, his only experience finding a surprise in a machine came from a Pac Man game he bought with a friend in North Carolina. He came away with a cash box containing $150 in quarters, his purchase price for the game.

The very nature of pinball machines as high-maintenance beasts sustains his vocation, and it also is what killed them off as a popular pastime when video games came along. There is only one pinball game manufacturer in business these days, he said.

“Kids today don’t know what pinball is,” he said. “It’s sad that whole generations have missed out.” 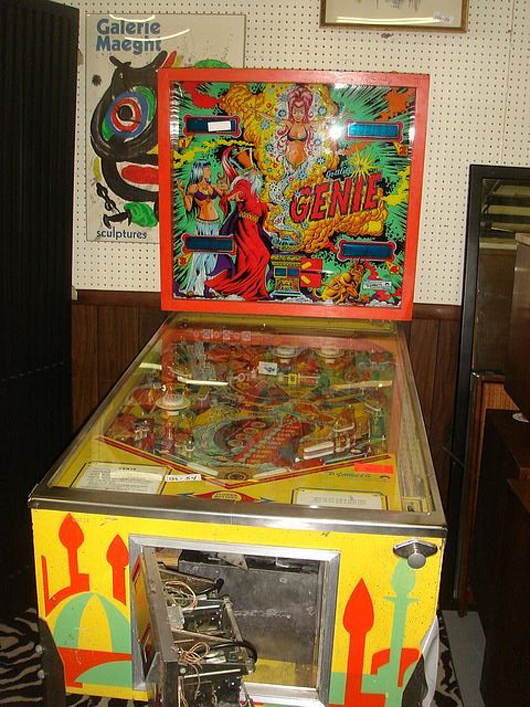 Alexi Anastasio became fascinated with pinball while playing a Genie, a solid-state machine made by D. Gottlieb & Co. in the late 1970s and early ’80s. Image courtesy of LiveAuctioneers Archive and Dutch Auction Sales.

Look out, LA – Banksy’s in town … maybe
Scroll to top