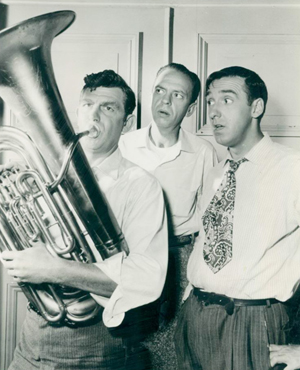 The fictional town of ‘Mayberry,’ setting for ‘The Andy Griffith Show,’ is believed to have been based on Andy Griffith’s hometown of Mount Airy, N.C. In this 1963 TV show publicity picture, Griffith, who played Sheriff Andy Taylor, is pictured at left. Also shown are two other pivotal characters from the show: Deputy Barney Fife (played by Don Knotts, center) and Gomer Pyle (played by Jim Nabors, right).

MOUNT AIRY, N.C. (AP) – In the town of Mayberry from “The Andy Griffith Show,” a small-town sheriff and his trusty deputy always outwitted big-city crooks, and problems never got much bigger than a trigger-happy kid with a slingshot.

But while Mayberry was fiction, it was inspired by a real place: Mount Airy, N.C., the late Andy Griffith’s hometown. And more than a half-century after the series first aired, fans are still coming to Mount Airy, looking for a glimpse of small-town life and the simpler times portrayed on the show.

Here visitors can eat at the Snappy Lunch, which Griffith’s character, Sheriff Andy Taylor, once recommended as a nice place to take a date. They can satisfy a sweet tooth at Opie’s Candy Store, named for the sheriff’s son, or book a Squad Car Tour of the city at Wally’s Service Station. Businesses with Mayberry in the name are too numerous to count, but they include the Mayberry Motor Inn and Mayberry Trading Post. There’s also an Andy Griffith Museum and a bed-and-breakfast created from the actor’s childhood home.

Recent visitors to the museum included Kimberly Lambert of DeRidder, La., and her family. “If I make a statement that doesn’t quite fit in with the thinking of 2012 and the liberalism of things, I’ll usually say that they may sound a little bit Mayberry to someone else, but that’s what we believe,” said Lambert. “It’s a way of life. I’ve always perceived the Mayberry show as a way of life.”

People come to Mount Airy “to walk where he walked,” said Tanya Jones, executive director of the Surry Arts Council. “This is Andy Griffith’s hometown. You go to Salzburg in Europe because Mozart was born there. This town influenced his creation of the fictional town. I don’t think in any way that Mayberry is Mount Airy. But I definitely, absolutely, unequivocally think Mount Airy influenced his creation.”

Mount Airy is nestled in the state’s Piedmont region, about 35 miles northwest of Winston-Salem.

Tourism in Mount Airy is up since Griffith died, with about 10,400 people visiting the Andy Griffith Museum in July, almost double the 5,300 who visited in July 2011. More than 2,500 showed up at the museum in the three days after Griffith’s death July 3, and so many came for autographs from actress Betty Lynn- who played Thelma Lou, the deputy’s girlfriend – that fans had to be turned away after the first 500.

“People cry when they meet me,” said Lynn, 85. “It’s the nostalgia … I don’t know. But it’s very touching.” She still watches “The Andy Griffith Show” on a local channel at 5:30 p.m. each weekday, sometimes skipping the dinner that’s served at the same time in her residential community. The show still makes her laugh, she said, recounting the episode where the sheriff and his steady girl Helen Crump get stuck in a cave.

Griffith’s recent passing may also attract more visitors to the 23rd annual Mayberry Days, scheduled for Sept. 27-30. The event typically attracts 25,000 to 30,000 people. This year, the Surry Arts Council, which sponsors the event, plans tributes to both Griffith and George Lindsey, the actor who played Goober and who died in May.

Tourism, with an estimated economic impact of more than $100 million, is the second-most important industry in Mount Airy’s home of Surry County, behind agriculture. Its growth has helped to staunch the loss of 10,000 jobs in the past decade with the demise of textiles and furniture.

“Andy saved the town,” says Emmett Forrest, Griffith’s friend since childhood and proprietor of the museum. Forrest points out shopping centers with big box stores on each side of Mount Airy, a scenario that “usually dries up Main Street. But because of Andy and our tourism, we’ve got a Main Street with no empty stores.”

But sustaining tourism and the mythology Griffith built around his hometown sometimes means keeping the real world at bay, just as the show did. The show aired during a tumultuous era – 1960 to 1968 – but its scripts studiously avoided references to current events, serving instead as a refuge from headlines about the Vietnam War, civil rights clashes and the assassination of President Kennedy. You won’t learn about Griffith’s politics at the museum named for him (though he supported President Obama’s health care plan), and political and advocacy groups are prohibited from taking part in Mayberry Days, where guests are asked to avoid politics in their speeches.

And that’s what visitors want. “It’s been a dream of ours to come up here for a long time,” said Clint McHan, of Ackerman, Miss., who visited the museum with his wife, Jamie, and their son, Paxton. “I just wanted to be on the street, knowing that he walked on that street.” On the show, he said, “you don’t have to worry about anything.”

Asked if that time ever really existed, the 34-year-old said he wasn’t old enough to know.

But another visitor, Melanie Pledger of Winston-Salem, says it did – at least at her house. “I certainly respected my mom and dad,” said Pledger, who came to the museum with her mother, Carolyn Courtney of Benton, Ark., and her three sons. “We all sat down and ate dinner. I didn’t realize everybody didn’t do that.”

Pledger thinks people are looking for “down-home values, family, God, country, that kind of patriotism,” when they visit Mount Airy. “I think America’s really hungry for that,” she said.

Forrest brushes aside any suggestion that the times were any different than what “The Andy Griffith Show” portrayed. When asked about the racial divide of the ’60s, he replies that he and Griffith grew up on the poor side of town, and two black families lived across the street from his family. 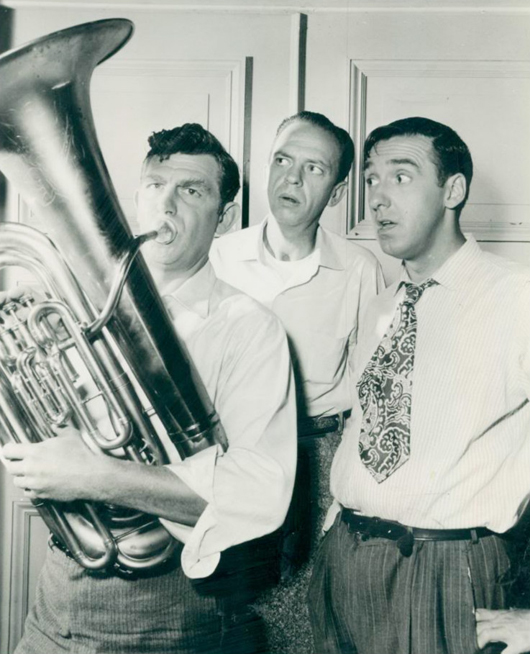 The fictional town of ‘Mayberry,’ setting for ‘The Andy Griffith Show,’ is believed to have been based on Andy Griffith’s hometown of Mount Airy, N.C. In this 1963 TV show publicity picture, Griffith, who played Sheriff Andy Taylor, is pictured at left. Also shown are two other pivotal characters from the show: Deputy Barney Fife (played by Don Knotts, center) and Gomer Pyle (played by Jim Nabors, right).