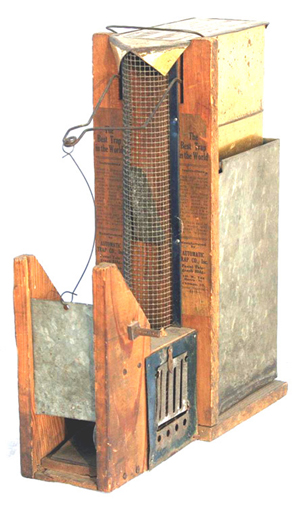 Automatic Trap Co. advertised this device as ‘The Best Trap in the World.’ Made of wood, tin and wire, the trap stands 11 inches high. Image courtesy of LiveAuctioneers and Richard Opfer Auctioneering Inc.

JANESVILLE, Wis. (AP) – Mary Putsch’s hobby is a trap. Lots of them, actually.

“I am basically a collector,” said the 73-year-old woman, standing among the wall-to-wall collectibles that decorate the front living room of her Janesville home.

Surprisingly, that drew her into one of her strangest collectibles – mousetraps.

“I love the story of ‘Cinderella’ and how the fairy godmother transforms a pumpkin into a beautiful carriage and the mice and rats into horses to pull it,” Putsch said. “I really like the illustrations, and that’s what brought me to mousetraps.

“In my picture book, when Cinderella went to get these mice for her fairy godmother, they were in something that looked to me like a bird cage,” she said.

It was, in fact, a live trap for mice.

“Having never seen anything except one of those flat, snap mousetraps, I couldn’t imagine how even a fairy godmother could make anything out of what was left in one of those.”

While browsing an antique shop one day, Putsch noticed a bird cage-like device hanging from the ceiling. The tag on the item read “rat trap,” and Putsch instantly understood what the story and illustration in her Cinderella book was about.

Later, Putsch found the same trap – only smaller and designed to catch mice.

“So I was off and running,” she said.

A 20-year obsession was born.

Putsch is so fascinated with mousetraps she weaves historical facts and stories about them into her conversations.

“I believe man created cats to get rid of mice.”

“The house mouse came to this country with man’s ancestors in 1775.”

“There are 4,400-some patents on mousetraps. That’s more than any other single item.”

Although Putsch has never counted her traps, she estimates she has at least 100 dating back to the 1800s. She’s found her treasures in antique shops and flea markets, had them given as gifts, bought them on trips abroad and even had a few made by her husband.

She’s also bought more modern mousetraps, amused by advertisements promoting them as everything from disposable to reusable, depending on economic conditions.

Made mostly of metal, plastic or wood, the traps cost Putsch anywhere from $1 to $35. Her favorite and most unusual item is “the world’s best trap,” which was made in Germany and given to her by her husband, Joseph, as an anniversary gift.

Collecting mousetraps might not seem mainstream, but Putsch is quick to explain their appeal.

“It’s man’s challenge to solve this problem. The mousetrap is the icon of man’s creativity and ingenuity, yet he’s still working on how to get rid of the mouse,” she said.

Putsch is a member of The Questers, a group for people who enjoy history and antiques, and has been invited to give programs about her mousetraps to three local chapters. She’s also spoken to the Janesville Area Retired Educators Association, Luther Valley Historical Society and Wisconsin Historical Society.

People who know Putsch collects mousetraps often buy her stuffed or plastic mice and rats to display with them. And on the off chance someone has a question about the contraptions, she’s always ready.

“When people want to hear about ’em,” she said, “I drag them out and talk about them.”

Information from: The Janesville Gazette, 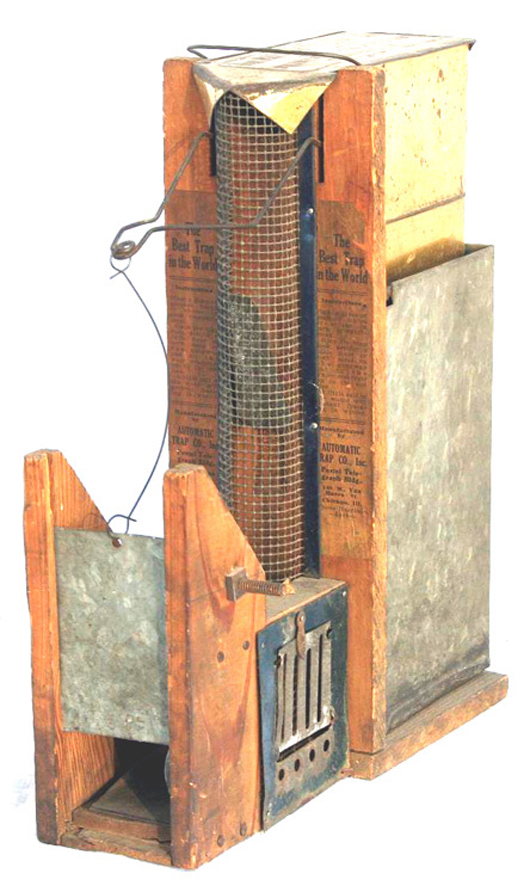 Automatic Trap Co. advertised this device as ‘The Best Trap in the World.’ Made of wood, tin and wire, the trap stands 11 inches high. Image courtesy of LiveAuctioneers and Richard Opfer Auctioneering Inc.