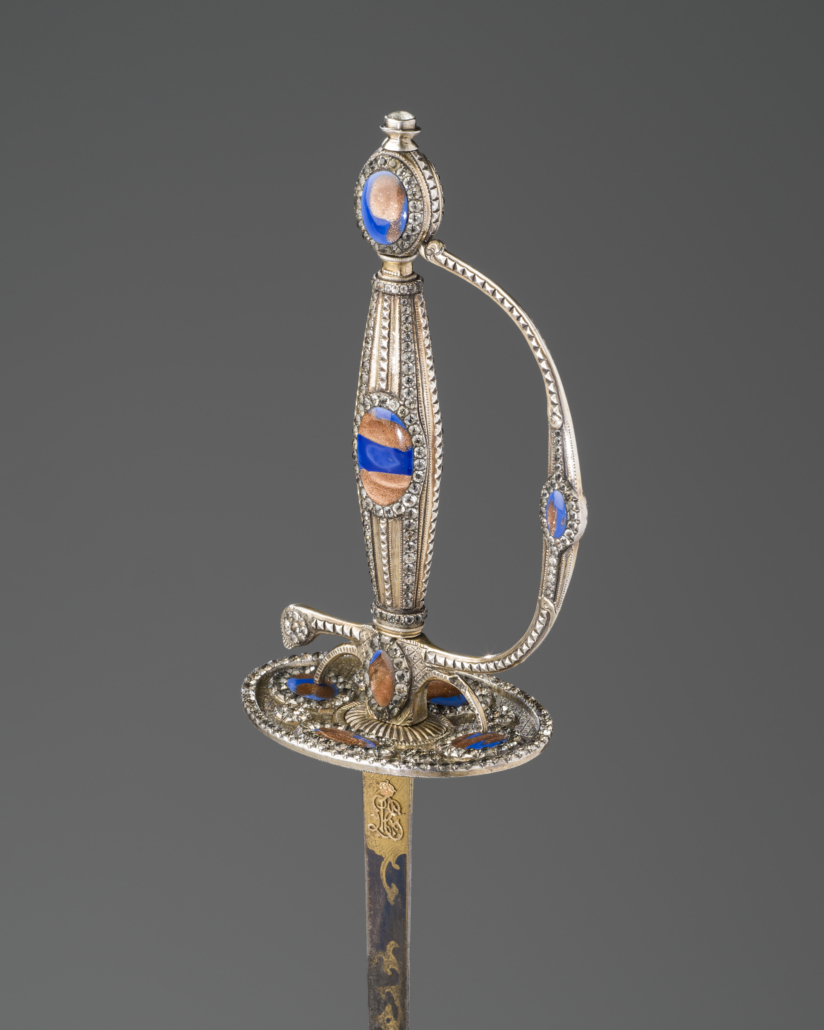 Circa-1785 small French sword with glass brilliants, from ‘In Sparkling Company’

CORNING, N.Y. – On May 22, The Corning Museum of Glass will open the groundbreaking exhibition In Sparkling Company: Glass and the Costs of Social Life in Britain During the 1700s. Presenting the glass objects that delighted the British elite, the exhibition examines how those goods defined social rituals and cultural values of the period, while also illuminating a darker side of history—how the British upper class benefitted from enslaved and indentured labor to create and pay for their glittering costumes and jewelry, elaborate tableware, polished mirrors, and dazzling lighting devices. The exhibition is organized by Christopher L. Maxwell, Curator of Early Modern Glass at CMoG, and will be on view through January 2022.

“In Sparkling Company will demonstrate the many functions and meanings of glass in 18th-century social life,” said Maxwell. “For those who aspired to be part of the polite world, glass objects presented an opportunity to demonstrate modernity, taste, and discernment in a social context. Many of these glass consumer goods were new to the market in the 1700s and consequently offer trenchant insights into the social, cultural, and political values period.” 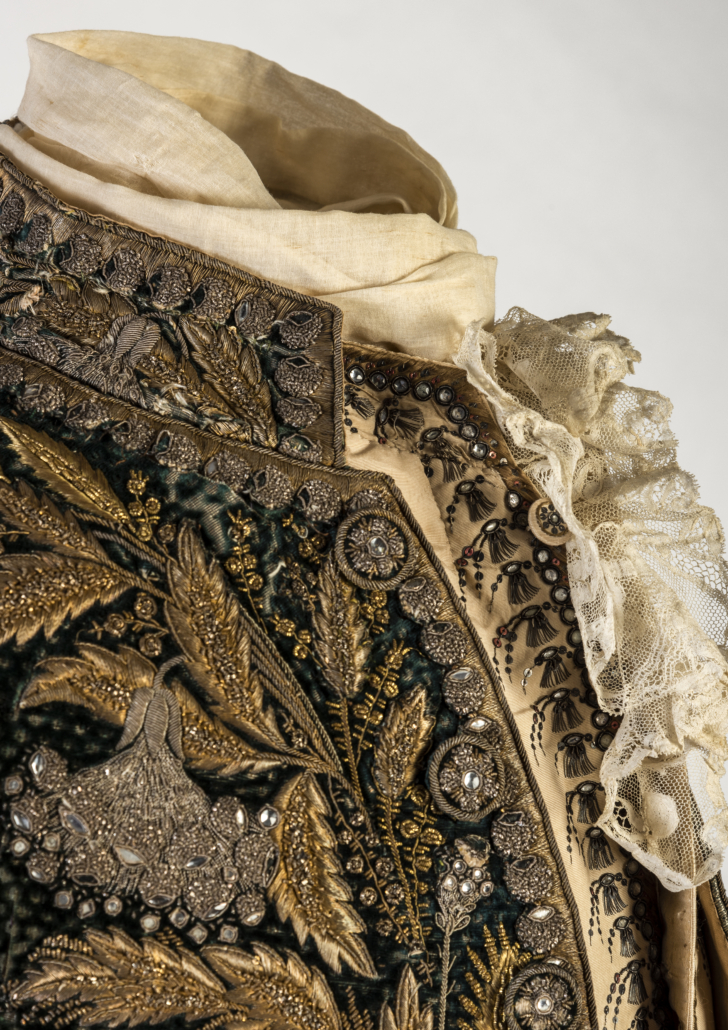 Circa 1780 French man’s coat and waistcoat with glass paste stones, from ‘In Sparkling Company’

In the 1700s Britain was a prosperous and commercial nation. Its growing cities were hubs of industry, scientific advancement, trade, and finance, and its colonies were expanding. British merchants navigated the globe carrying a multitude of cargoes: consumable, material, and human. Underpinning Britain’s prosperity was a far-reaching economy of enslavement, the profits of which funded the pleasures and innovations of the fashionable world, among them luxury glass. Alongside the beauty and innovation of glass during this period, the exhibition presents artifacts and documents relating to the slave trade, such as glass beads that were traded for human lives as well as elegant glass dishes, baskets, and bowls that held sweet delicacies made with sugar produced by enslaved labor in the British colonies.

Robert Adam designs for the walls of the drawing room at Northumberland House, 1770-1773, from ‘In Sparkling Company’

“This exhibition considers the role of glass as a witness to the many changes of the 18th century and to the ways in which its material qualities–not just its presence–defined the social rituals, cultural values, and personal identities of the period,” said Corning Museum of Glass president Karol Wight. “Glass played a role in the earliest encounters with continents beyond Europe and in the too frequent exploitation of their natural resources. The wealth of the British society that wore sparkling costumes and used polished glass on its tables rested squarely on the shoulders of the people who worked to create this prosperity: enslaved and indentured humans, traders, seafarers, and military explorers.” 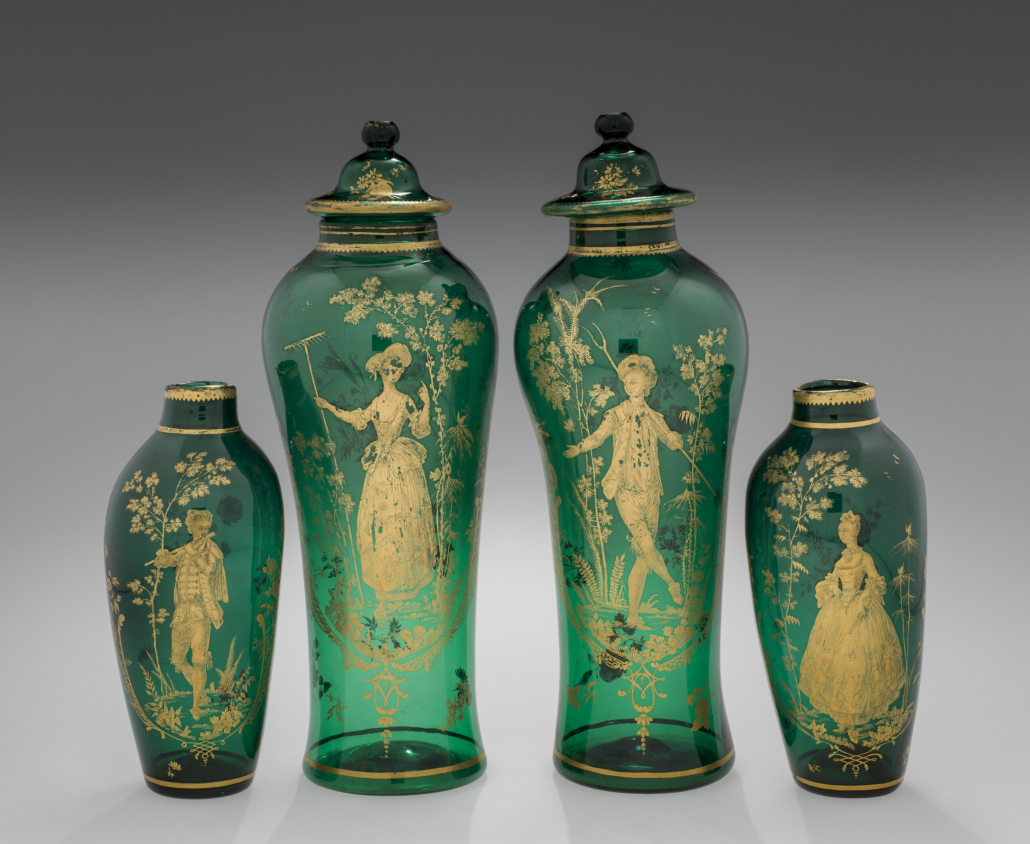 Circa 1765 English pair of covered green lead glass vases, from ‘In Sparkling Company’

Nowhere was this prosperity on greater view than in domestic interiors, which were transformed by the increasing presence of clear and smooth plate glass. The exhibition will put on display newly conserved panels from the original Northumberland House Glass Drawing Room—on loan from the Victoria & Albert Museum—designed by the celebrated British architect Robert Adam for Hugh Percy, 1st Duke of Northumberland (1714-1786) and completed in 1775. In Sparkling Company will feature a virtual reality reconstruction of the entire drawing room, created by Irish production house Noho. 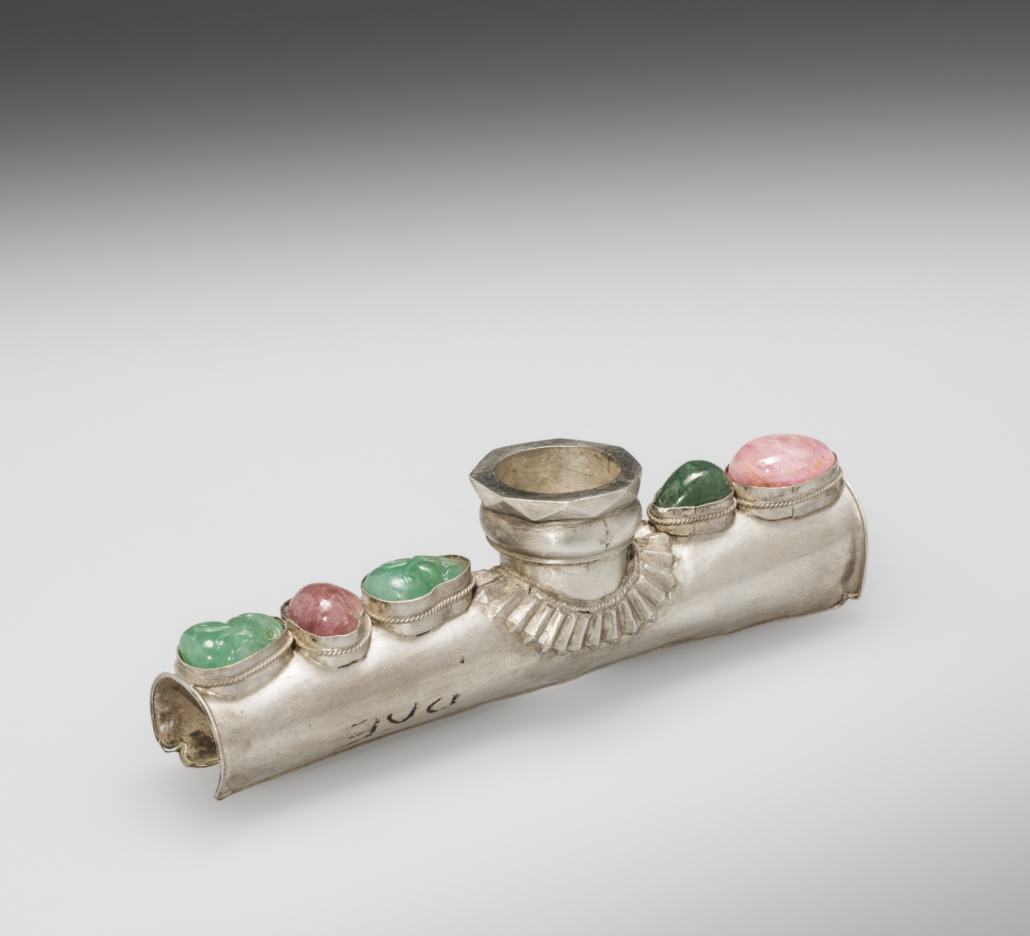 Circa 1840 Chinese silver mouthpiece of an opium pipe with mounted glass gems, from ‘In Sparkling Company’

The smooth, “polished” and reflective properties of glass also perfectly embodied 18th-century ideals of sociability, in what is considered by many as the “age of politeness.” As urban centers grew in size and prosperity, sociability became ever more sophisticated. The terms “polite” and “polished” were often used interchangeably in the numerous etiquette manuals eagerly read by those wishing to take their place in the polite world. Examples of such literature will be displayed alongside fashionable glass of the period. 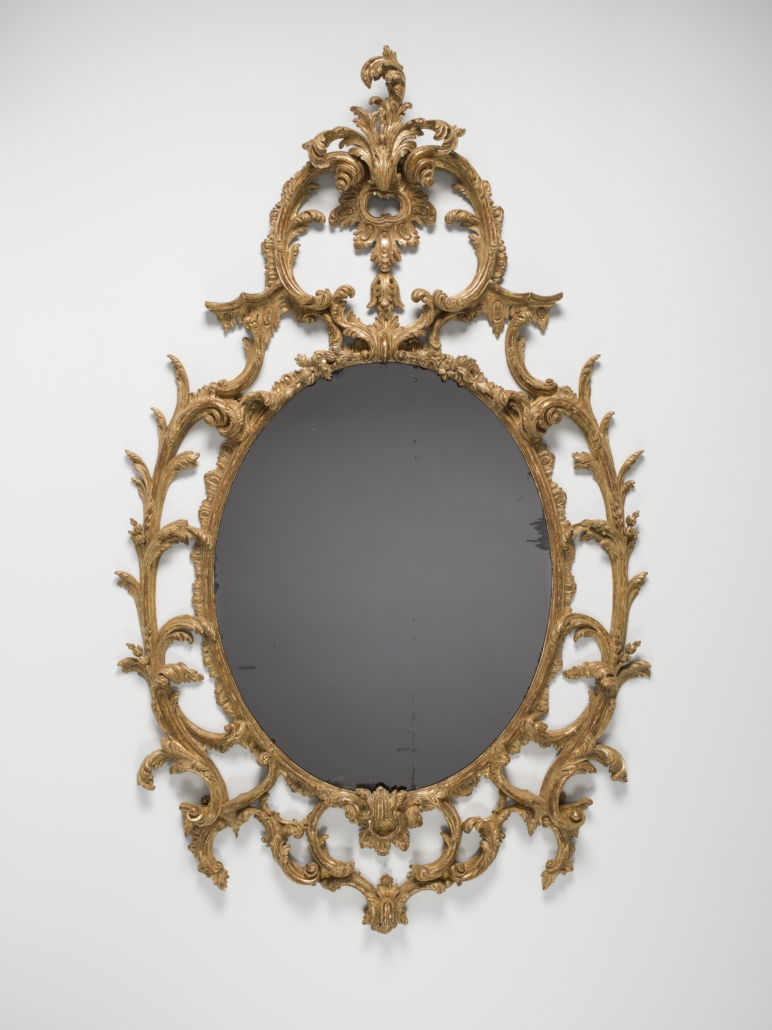 Circa 1760 Scottish Mirror in gilded wood frame, about 1760, from ‘In Sparkling Company’

The Corning Museum of Glass is working with Cheyney McKnight, founder of Not Your Momma’s History, which works to educate and increase visibility of African Americans at historic sites around America, to more fully tell the story of glass and enslaved people.

Click to visit the Corning Museum of Glass online.